Everything in the house is acting up. The fridge has melted ice, the radio is acting strange, etc.

I multimetered the panel box and each breaker is either 90 V or 140 V alternately. I have a plan to upgrade the box from 100 A to 200 A as the meter shows the system is set for 200 A. But meanwhile everything is acting up.

Call the power company NOW and report a power outage

The fact that you've worked on your panel is unrelated. Given the testing you just did and the results you got -- you have a power outage at the meter pan or before. It could be where the neutral service wire connects to your neutral bar, but that's the only place it could be on your side, and super easy to check.

To be more precise, the type of outage is a "Lost Neutral".

Loss of a supply wire at or before the meter pan is a power outage.

It's still a power outage and should be treated as such.

As long as you are confident in the quality of the connection between your neutral service wire and your neutral bus, you should button up the panel and there's no reason to show it to the power company. Everything they'll care about will be at the meter pan or their side of it.

DON'T procrastinate this or try to work around it by balancing loads etc.

Seriously, unless you plan to shimmy up a pole with a set of Allen sockets, every possible path ends with you calling the power company and them fixing their service-drop issue. Which they will do for free, same-day and probably 10 minutes up on the pole. And then you'll be like "darn it Harper, why didn't you lead with 'Call the power company', why send me in circles doing all that other stuff first?"

You should call the utility company. You likely have an open circuit between the neutral bus bar on your electric panel and the neutral wire that goes to the meter, or further upstream. Split-phase power usually works like this in the USA and Canada: 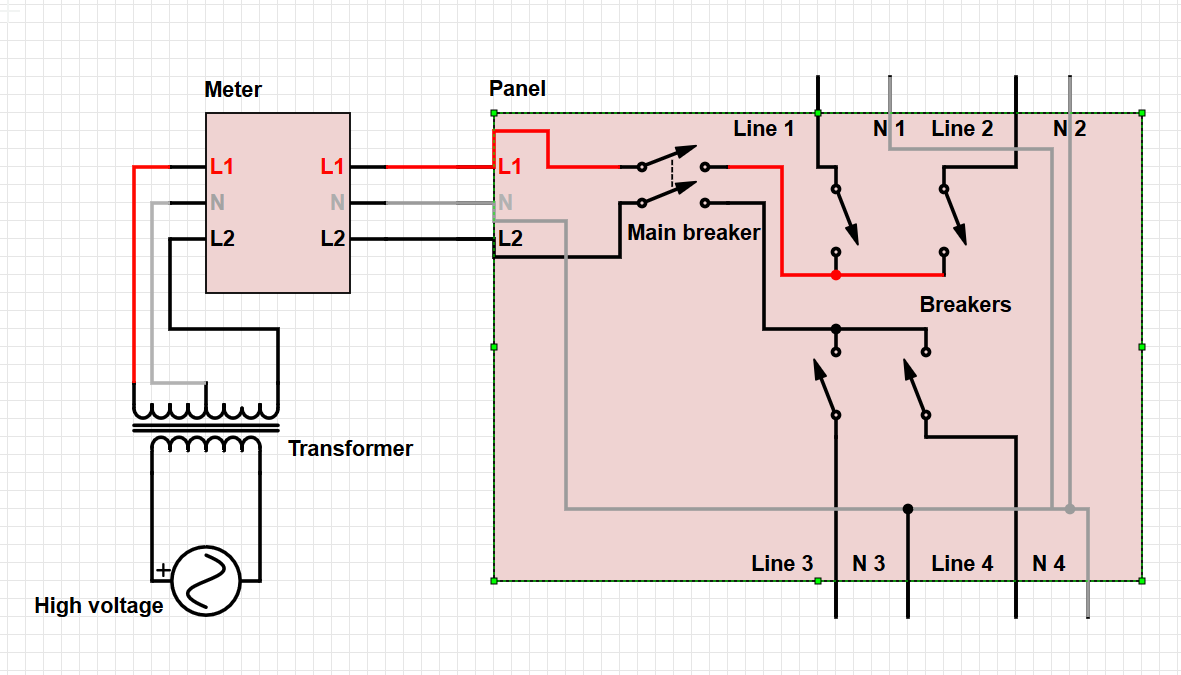 The transformer's secondary is 220V-240V, and it is tapped in the middle to produce 120V between the center tap and any of the two ends. Connecting between the red and black phases gives you 220V-240V. Connecting between a red or black wire and the white gives you 110V-120V. The neutral wire (white) is grounded at the box or at the utility's equipment, so there should never ever be voltage on a neutral wire.

Good? Now, you say one side of the panel box (say the red) has 90V and the other side has 140V. 90+140 = 230, so it looks like the black and red hot wires are connected correctly. However, the neutral wire seems disconnected at the meter or between the meter and the transformer. This is very bad for several reasons:

Normally, with a neutral that is connected correctly at the transformer, you have 120V between line and neutral regardless of current in each device: 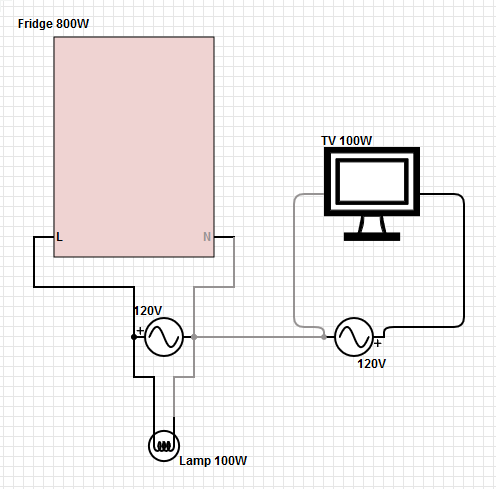 In your case, however, there seems to be no neutral connection at the transformer, so you now have two circuits in series on a 230V supply: 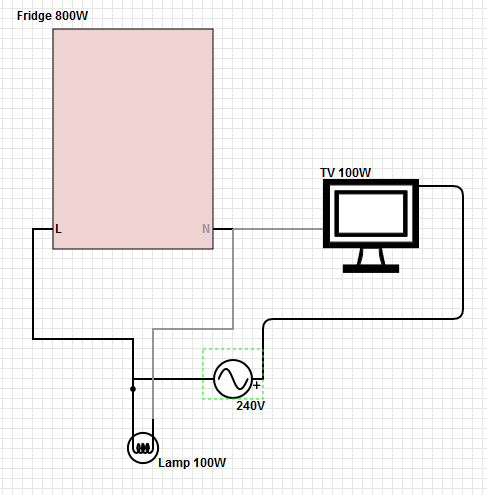 If the lamp and TV are on, this will work fine because they consume the same current and will split the 230V 50/50, so you decide not to call an electrician.

You cannot do this repair safely, because the broken conductor is most likely located upstream from the main breaker, and therefore someone from the utility will have to remove the meter from the sealed enclosure to diagnose the fault safely. In the meantime, turn off the main breaker, as this is a dangerous situation.

It sounds like either the transformer feeding your house has an issue, or the neutral is broken. It seems like a local issue since the average of the two legs is 115V, which is a normal voltage in North America. You should throw your main and call the power company.

Sounds like you have a bad neutral. You need to turn off the power until it is found and rectified.

I think it would actually be best to turn off your main breaker or open your main disconnect first, THEN turn off all the other breakers until the problem is fixed and power is restored.

Then call the power company, or an electrician if you can get a faster response.

When the problem is fixed, turn on the main first, then turn on the branch circuit breakers (after verifying voltages if possible).

For this reason, if you start turning off branch circuit breakers off you may very well make the imbalance worse and do more damage to your electronics etc.

Tell the electrician that you've been told that you have a lost neutral. He should know how to test for that. You said that you had 90 v at some receptacles and 140 V at others. This was with some loads connected. This is diagnostic for a lost neutral.

With a lost neutral if all loads are off you will measure the same voltage at all 120 V circuits (hot to neutral or hot to ground). If you add a load on one receptacle, then voltage on the hot for that receptacle (and the voltage on any hot on that entire leg) will be lower than 120 V. And on the other leg voltage on any 120 V hot (measured to neutral) will be higher than 120 V by the same amount as it was lower on the loaded leg. A good load is a hair dryer or a vacuum cleaner or an electric space heater.

I have learned a lot from all the answers, and it may be that what my point here is so obvious that it doesn't bear mentioning, but it was not obvious to me and the same may be true for some others.

It seems to me that the effect of the grounding (earthing) paths has not been attributed as the cause of the damaging voltage rise on one leg due to a lost neutral.

Evidently in the US we use the TN-C-S grounding system. See https://en.wikipedia.org/wiki/Earthing_system for which a broken neutral is a major safety risk.

If the neutral is lost (completely or partially) the only or main return current path from the panel (ground rods) to the transformer (ground rod) is through the earth, a path which has significant resistance (unlike an intact neutral which has effectively zero resistance).

For the 125 V power draws in the house, the current flow back to the transformer is the difference between the current in the two hot legs. An imbalance in the two legs will appear as a non-zero current in the return path. If the low resistance neutral is lost, this current will cause a voltage difference (V = IR) between the ground rods at the consumer panel and at the transformer. This voltage difference will be subtracted from the voltage of one leg in the house (the higher loaded one), but added to the voltage at the other leg (the lower loaded leg). Hence any equipment on the lower loaded leg will get higher than half the voltage difference between the legs. And there could be a cascading failure because every time a load disappears (as equipment fails) on the higher voltage leg the voltage gets that much higher.

I played around with the infinite grid of resistors model of the path from the house ground rod to the ground rod at the transformer pole and got stumped and humiliated pretty fast. @Harper referred to this in his comment.

This mathpage analysis gives the formula for the resistance between two points on a diagonal separated by m diagonal steps as:

I guess one could estimate the resistance per foot of the soil and then the number of ft to the pole would be m. But my takeaway is there is significant resistance between the ground rod of the house and that of the transformer pole.

I have two ground rods in series and I could disconnect the outer one from my panel and using jumper cables and an extension cord measure the resistance. Not sure I'll be able to motivate myself to do this though. Does anybody know the resistance through 30 ft of "soil" (now very wet Dallas soil)?

EDIT2 I now realize that I would have to disconnect both ground rods to get an accurate measurement and I am not willing to do that. In my yard away from the house I could stab two scrap pieces of cut-off grounding rod and see what resistance I get between them.

I did go out and pound two 18" long pieces of grounding rod 1 ft into the ground 30 ft apart in our very wet backyard. I used a 50' extension cord as an extension of the test leads of my new Fluke 115 true rms multmeter in the resistance mode. Of course, this is a DC measurement and quantitatively meaningless but I'm just reporting what I got. Someone here must know what a valid result should be.

The sum of the reciprocals of the odd integers (aka the odd harmonic series) does not converge as m increases to larger and larger m. For m > 5 and progressively better for m > 10 the sum of this series asymptotically approaches a logarithmic function

1
House's Power Cycling Between High and Low Voltage
1
Voltage fluctuations, please help
39
Why is my voltage dropping with load and why is current flowing on my ground wire?
0
Voltage spike at light box

1
Can I upgrade my service and install a new panel?
2
Does a 125 AMP panel require a heavier supply cable than a 100 AMP panel?
3
Is a 200 amp panel adequate for my needs?
4
Can a sub-panel have a larger main breaker than the feeder breaker in the main panel?
2
400 amp meter base combo
8
Can I add a breaker to my main disconnect panel?
5
Can I add a second set of lugs to a 200A panel for a second sub-panel?
3
Adding 200-amp subpanel to 200-amp main panel sanity check
0
Can i replace a 200-amp Ite panel with a Homeline 225-Amp panel? Burnt stabs on a 50 yr old panel in a 40-50 yr old town home we recently purchased