I've done a lot of searching and can't seem to make sense of what to do in my situation. I had 2 existing 3 way switches that I've replaced with new 3 way dimmers and also added a third single pole (dimmer) switch to a new light fixture.

Here is what the wiring looked like when I removed the old switches for reference: 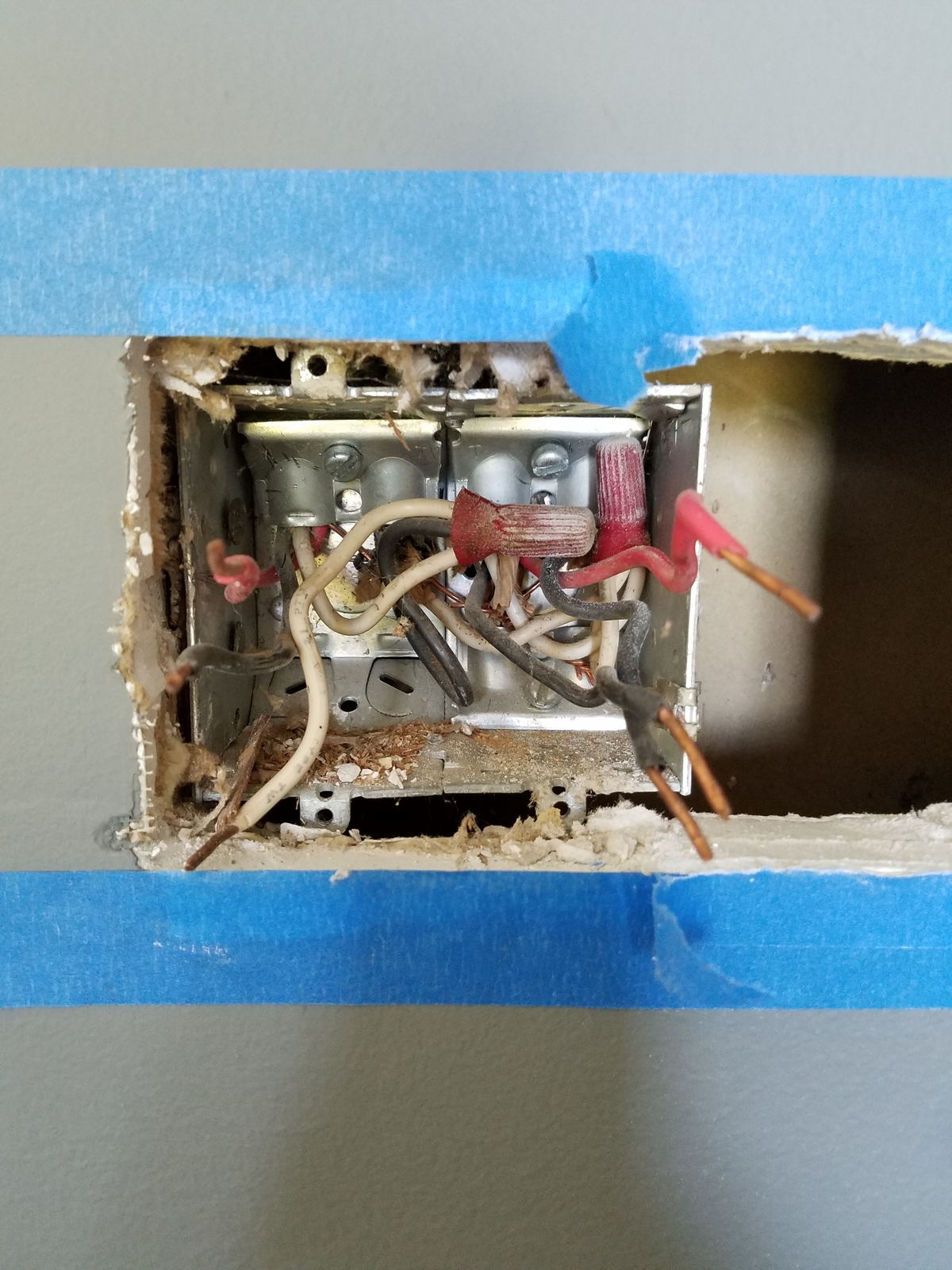 Going off of that and making sense of the instructions the best my novice mind can, I was able to wire them up as below: 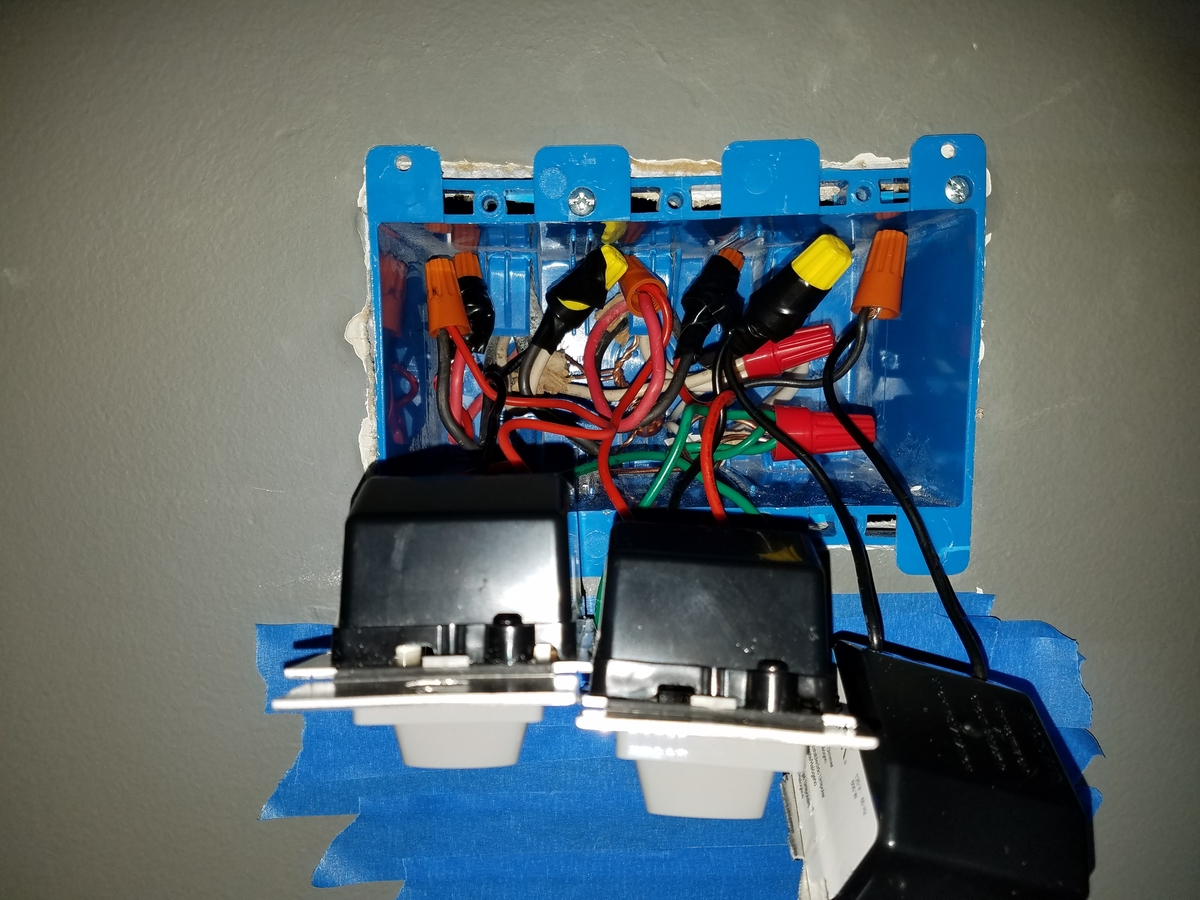 Wired this way, everything works - however, the new light fixture will only come on if the middle 3 way dimmer is also on. Also the dimming for the far right switch works, but is overridden by the dimmer position on the middle 3 way switch. My goal is to wire them up so I can independently control the new single pole switch on the right and new light.

Is this possible? If so, can someone please point me in the right direction? 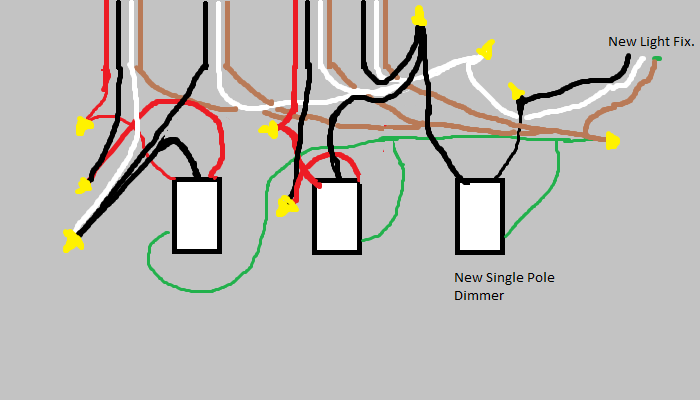 I will take another look at it when I get home after work.

I am afraid that the way the photos are taken I can't clearly see what wires go where. But I have a fairly safe guess for your answer.

When you have two three way switches on a light, you have a circuit like this: 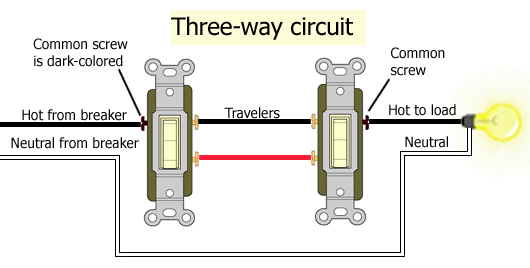 (The actual physical layout, wire routing, and the color coding may be quite a bit different than the picture - the illustration is just to show how the circuit is put together.)

It sounds like you tapped the wire going to the common terminal on the middle switch to connect to the new switch on the right, and switch happens to be on the load side of the 3-way switch circuit.

If that switch happened to be on the line side of the 3-way switch circuit, and you tapped the wire on that common terminal for your new switch, you'd be getting constant hot at the third switch, which is what you want; that new switch / dimmer alone would control the new light.

But as it is, you're supplying that right-side dimmer switch with whatever is coming through to the load side of the middle 3-way circuit - no power, full power, or dimmed power, depending on the position of the switches.

There is of course one hope for an easy solution. If the three-way switch on the left happens to be on the line side of that three way circuit, you can tap the common from that switch instead, and you're set.

If you don't have a constant hot in the box - just travelers for the three way circuits entering the box - you have a bit of a challenge. You will have to either run another cable to supply power, or you'll have to convert one (or both) of the three way circuits to some kind of wireless switching, freeing up the travelers. Then you can use one of those wires for constant power.

1
Can I wire a light with 3 switches in a 4-way switch configuration with one switch being a dimmer?
5
What is the proper way to convert a pair of three-way (SPDT) switches into a single two-way (SPST) switch?
1
Combine two independent switches into 3-way?
2
One light switch powers two separate light switches
4
Extending power from existing three-way switch circuit
1
How to convert 2 3-way switches to one single pole switch with dimmer?
1
Replaced lights & switches on 3 way switch circuit; not sure if I have wiring problem or product problem or both
1
Single 14/3 wire for 2 independent switches
1
Ceiling fan light powered by two 3-way switches, but also by fan's single pole switch. Is it safe to replace the 3-way switch with a smart dimmer?