What wood joint can I use to connect railing members over a post?

For the fence we'll be using 2"x4" pressure-treated wood that will be attached to 4"x4" PT posts with wood screws.

What wood joint should I use so that I don't need to buy any more hardware to make it sturdy?

This is what I originally thought of doing, but the builder says that I would need to add L-brackets on either side of the post to make it stronger.

Then I thought of using a half-lap joint, but the builder says that it would make the sides weaker. Each 2"x4" is about 12 feet. 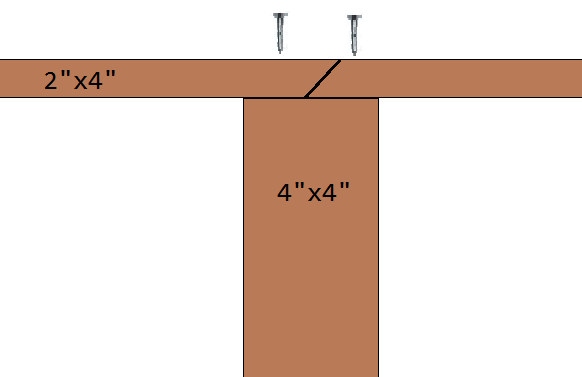 My question is: what joint is strongest for this particular scenario? I really don't want to buy more hardware to make it stronger (like the L-brackets).

You have a couple things going on here, so let's clarify:

If you're bent on a half-lap joint, the solution is to make a narrower connection, such that it's just wide enough to securely fasten it to the post, but doesn't compromise the strength of the board at or beyond the width of the post. 1-1/2 or 2 inches would do nicely.

There is evidence that the half-lap joint you have considered will be stronger than the joint recommended by your builder (I'll call that a miter-lap joint); it makes sense when you think about it because there would be significantly more wood/glue contact surface area.

The drawback is that the half-lap joint takes some special equipment and requires some precision, whereas the miter-lap can be done in the field with a circular saw.

So... once again, the final decision depends on cost/time versus longevity. If you are willing to spend more time/money up front, you will have a sturdier product that will last longer. Is it worth it? Only you can decide.

Not the answer you're looking for? Browse other questions tagged wood woodworking fence joints joinery or ask your own question.

8
What kind of wood should be used to replace a sub floor?
3
Can I use metal brackets to install a wood fence across an existing concrete driveway?
4
Should I reinforce my lap-joint?
4
How to mate two flat pieces of wood at a point about which both can rotate?
0
What types of wood (other than plywood) can a staple gun penetrate?
0
Can I use shiplap for shelving?
1
Floor standing U wood frame built at home - what to use for a 90 degree joint?
2
How deep to cut the lap-joint for joining the wooden beams without the glue
0
painting furniture with a lap joint (or notch)