How to run second disconnect/load center from meter

This other question discusses a bit about running two load centers from a meter. I am wanting to do exactly that. I currently have service that supports 200amp (confirmed with city). My existing disconnect in garage is 100amp and has a 3 wire cable going to 100amp panel in the house. That cable is routed through difficult places and the electrician tells me it will be expensive to upgrade to the 4-wire cable that would support 200amp.

I really only need 100amp more for the garage, so I did a little research and it appears that I would be able to run another 100amp loadcenter off the meter. The other Stack Exchange question I linked to above discusses that, even going over some code (like you can do this because of an exception if the disconnects are grouped together).

So in order to avoid having to upgrade the whole house to 200amp and replace that cable, which increases the cost drastically, I'd like the electrician to run another loadcenter right off the meter and have it right next to the existing disconnect in the garage. I mentioned this to him and he said we'd still need to replace the cable. Before I go back and forth with him, I'd like to be more informed, which is what I'm trying to do here.

First, is running a second loadcenter code-compliant? The total amps allowed by the two loadcenters would be 200amp, and the meter supports 200amp. The existing disconnect and the new loadcenter would be physically right next to each other.

Second, if that is code-compliant, would the existing 3-wire cable between the existing disconnect and the house panel need to be upgraded? If so, why? It would never have more than 100amp (protected by the disconnect breaker).

Third, is there anything special that would need to be done to run a second loadcenter or is it just run in parallel from the meter?

See my professional diagram below.

Thanks for your help, Mike 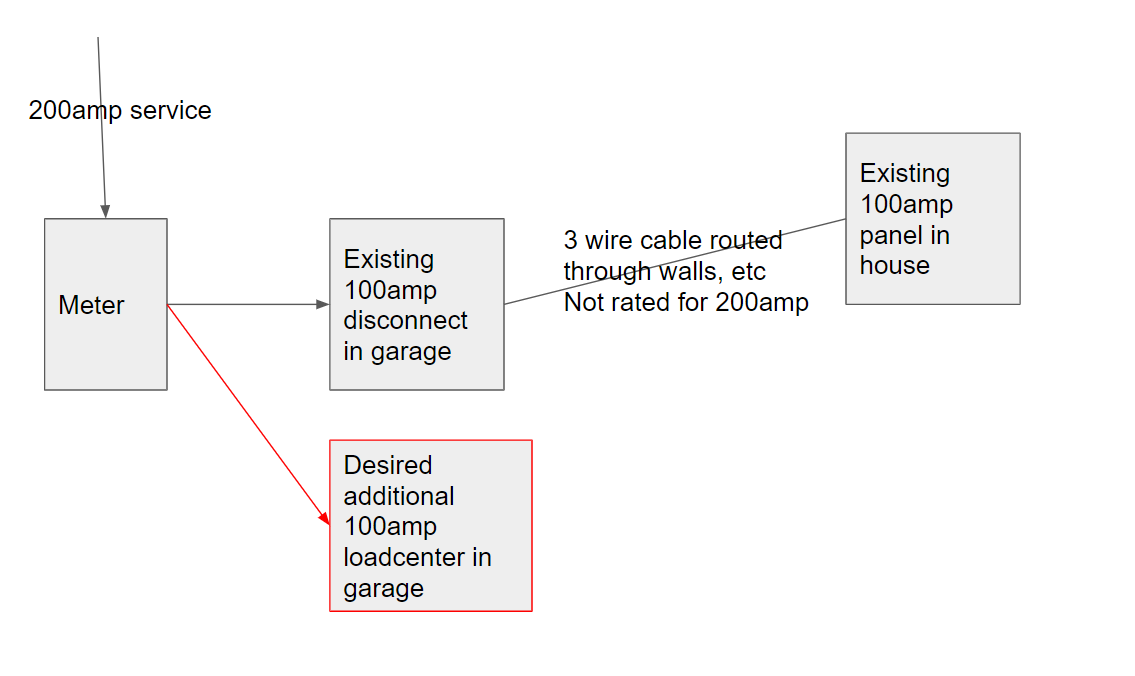 The issue with 3/4 wires isn't about ampacity. It's about grounding electrode systems and

Right now it's arguable (and possibly grandfathered) that the disconnect and your run from garage to house is all part of the service. To follow this logic through, the house has the one main panel and thus the one official neutral-ground bond. The cable run benefits from the 310.16b7 uprate, meaning the wire only needs to be rated for 83% of ampacity, or 83A not 100A.

If you add the garage panel as you mean to, with both disconnects right next to each other, the house run can no longer be a service. It moves the "main panel" point to the garage. Now the house panel is a subpanel. It will need separation of neutral and ground in the panel and all the way back to the garage. The connection is feeder not service, and ground must be present. That means the permissive 83% uprate goes away and the wire must be rated for full 100A, so it may be now too small.

The upside is that ground can be retrofitted separately, it doesn't require total replacement of the cable. Ground does not need to be bundled with the conductors because it does not flow current except in emergencies. It can follow any practical route.

3
two load centers on one meter

3
two load centers on one meter
3
US-Michigan—Subpanel install—Can I use PVC conduit and THHN in-wall to go from disconnecting means to panel inside the garage?
1
Is voltage drop calculated from the meter or the service panel?
0
Running Wire to an Outside Load Center
1
200 Amp exterior meter and disconnect with interior main panel
1
Can I use an outside feeder tap to run power to a garage?
1
Can I add a second disconnect main breaker load panel from the meter trough?
0
How can I run a new sub-panel directly from the meter base?
2
Pros/Cons combined meter/load center