Why might our washing machine cause our clothes to smell damp when dry?

Recently we've noticed that our clothes smell damp once dried. It doesn't matter if we tumble-dry them, hang them outside or hang them indoors. This leads me to believe it's our washing machine. We don't leave clothes in the washing machine long after the cycle is complete.

What other things can I check for the cause of the smell? Are there products I can put through the machine to eradicate it or could there be corrosion inside that means I need to buy a new machine?

Is your washing machine front-loading? I know some (many?) front-loaders have mildew problems because water gets trapped around the seal. Cleaning the seal and leaving the door open when not in use may help.

When all other remedies for curing bad smells coming from front load washers have been tried and have not been found satisfactory I believe the source of the smell may well be corrosion of the aluminium spider with the products of this corrosion harbouring ‘water’ that turns foul as described below, or, should no corrosion have occurred the ‘water’ left in the recesses of the hubs of the spiders will, if left long enough, turn foul. here is an image of the build up of smelly deposits in a spider removed from a Frigidaire built machine. 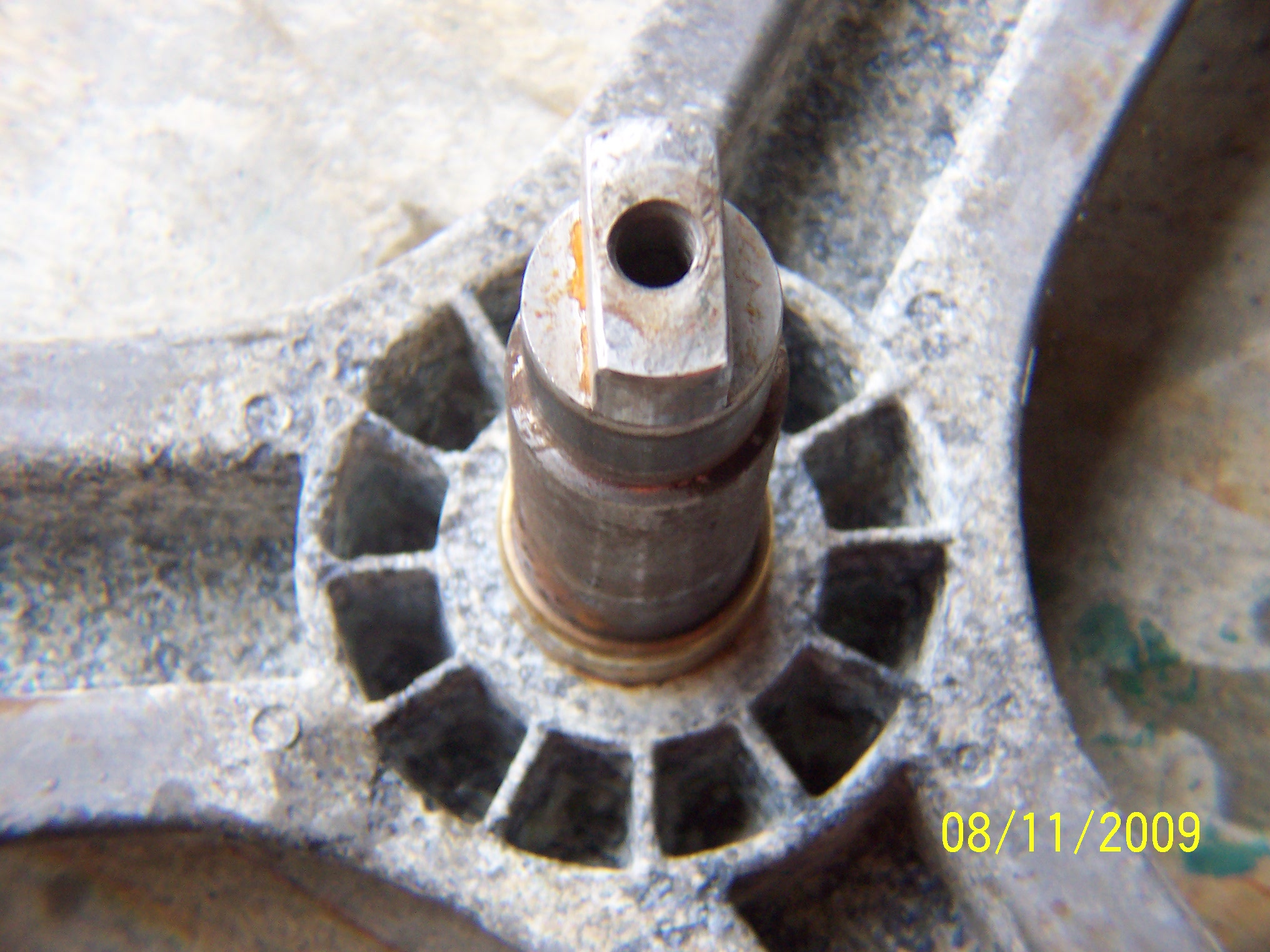 Aluminium, and its alloys, are corroded when immersed in an aqueous solution with a pH value below about 4.0 (acidic) [nitric acid is a well known exception] or above about 8.0 (alkaline), most laundry aids, detergent including HE detergent, borax, bleach (sodium hypochlorite), sodium carbonate (washing soda), sodium percarbobante (found in Affresh and OxiClean), sodium hydroxide, Affresh and OxiClean can have pH values above 8.0 should the required concentrations be reached. At the normal operating levels found in washing machines these values are not exceeded. However when the machine is shut down any water remaining will contain, inter alia, soil from the laundry, products of the interactions between the soil and the laundry aids used, unused laundry aids, and the chemicals found in the tap water. As the water from this mixture evaporates the concentration of the ‘impurities’ rises until such time as a ‘smelly sludge’ develops and/or a pH level above about 8.0 is reached and corrosion occurs. Prime areas for these deposits to occur are, in my opinion, the recesses found at, or very near, the hub of some of the aluminium alloys spiders found in front load washing machines. The final spin, no matter how fast, will not, in my opinion, remove all the ‘water’ from theses recesses.

Unfortunately the only way to cure the bad smell and/or corrosion in these cases is to strip the machine down, clean it, perhaps modify the spider, reassemble and alter your laundry practices. Not a popular solution I would guess!

If you have a front-load washing machine, and close the door when it's not in use, it can develop smells which can then transfer to clothes.

Leave the door open if possible - at least until the interior has had a chance to dry.

Most front-load manufactures recommend a cleaning process by running an empty load with bleach and hot water.

My front-load GE has a "hidden" filter - it's not mentioned in the owners manual at all, but it does occasionally get clogged up, and loads take much longer to finish than they should. You might want to pull off a panel and see if yours has one as well.

Edit: According to this, over-using soap - and apparently everyone uses too much - can also lead to a buildup of mold and mildew.

Given you're a UK user, odds on you have a front-loading machine. As others have said, the biggest tip is to leave the door open when the machine isn't in use. Even if it's just open slightly, it's enough to let air circulate which can prevent fusty odours building up.

You should give your machine a good clean every 3 - 6 months (depending on how often you use it). Most of the smells are associated with a build up of soap scum and powder in various areas of the machine:

I've had the same problem. It turns out you have to clean your washing machine every once in a while. Most newer washers have a cleaning cycle where you put in some bleach and let the cycle run. There are also products like Washer Magic and Tide Washing Machine Cleaner. Sometimes it takes more than one cycle to fix the problem depending on how long you've run your washer without cleaning. Mine was nasty after the first time. I had to clean out the drum with some paper towels because it kicked out some serious gunk.

We had a similar problem with our top loading washing machine. During some maintenance of the laundry room, I had to remove the washing machine and so I took it outside, tilted it back at about 45 degrees, and sprayed the tub and a lot of the other areas with a garden hose. I saw a lot of gunk come out and since then we have not had the problem of damp smelling clothes. I know this would not be easy to do but might be something to consider.

We had some issues with our top loading washing machine. I took the fabric softener section out of the center agitator and thoroughly cleaned it. This helped improve the smell and alleviated the problem we had of some random spots on our clothes.

Mold. In the washer. And perhaps your "large object filter" as shown in this video: https://www.youtube.com/watch?v=WdJOfRVnRxE

The damp smell drives me insane. I tried using bleach and dishwasher cleaner as I was advised by a repair company, but this made it worse. Stinky rotten clothes are what I got. I am on the market to buy a new machine next year. In the meantime using an expensive high concentrate fabric softener is truly helping. Also wiping off the machine after use and never leaving the door closed after use.

How long do you wait between washing and drying?

It's summer and hot in most places. Leaving clothes in the washer all day will leave you with stinky clothing.

We were having the same problem with our top loader. There were other problems with our washer though (randomly dumping water on the floor, also I think it stopped agitating). Our clothes came out smelling like mildew right after washing them. I thought maybe it was that the clothes were sitting in stagnant water for too long. Eventually we bought a new LG front loading washer and dryer and couldn't be happier! Sorry I don't have better advice.

I had this problem for years. I changed from liquid to powder, and problem solved.

leelee
11
1
Add a comment  |
Highly active question. Earn 10 reputation (not counting the association bonus) in order to answer this question. The reputation requirement helps protect this question from spam and non-answer activity.

Not the answer you're looking for? Browse other questions tagged plumbing water smell or ask your own question.

8
How high can I stretch my washing machine drain hose?
2
How to get rid of this sulfur problem
3
When to turn on the water for my washing machine?
1
Sealing the top of an appliance trap
1
Dishwasher causes terrible smell in disposal - why?
1
Why can't I get water out of my washing machine taps?
3
Sewer smell in basement - missing venting or other leak?
1
Tankless hot water smells