What type of crawlspace setup do I have?

New home owner here - I’m working on sealing the furnace ducts that run through our crawlspace. Previous owner used silver duct tape and not the proper mastic or UL approves aluminum tape. Long story short - I realized there are ducts in our crawl that actually blow heated air into the crawlspace. We don’t have AC, just a furnace (located in Pacific Northwest).

Is this normal? None of the ducts have insulation either, that was going to be my next task but now I’m questioning if it needs to be done? No insulation under the flooring or on the concrete slab. (Single story ranch home - approx 1500sq ft with a 3.5 ft tall crawlspace) 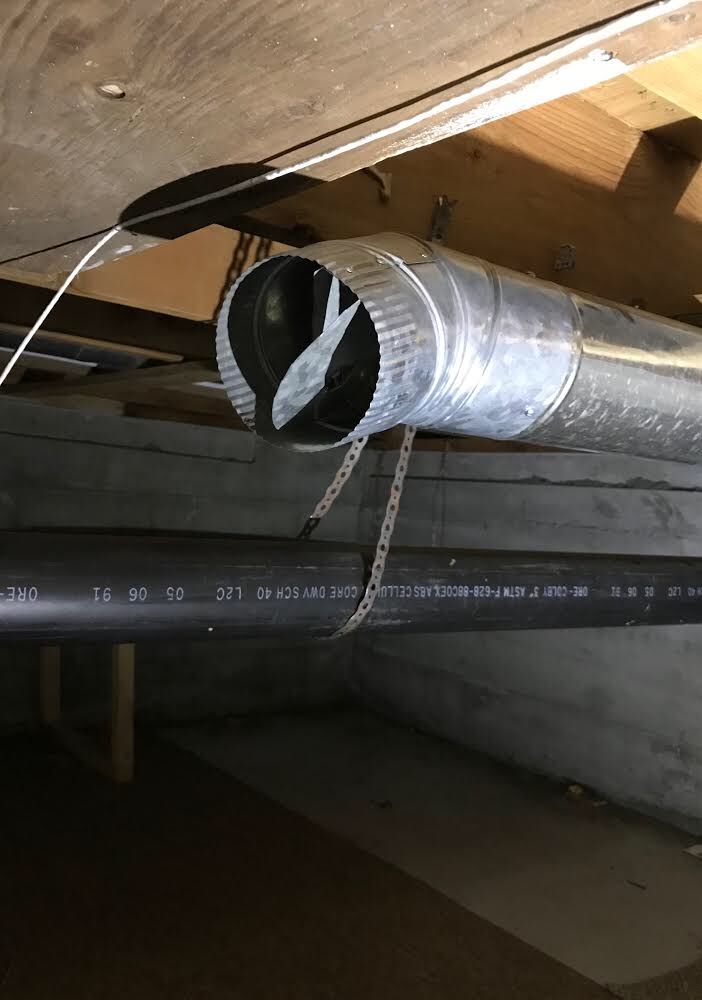 I have seen this done in our area to keep the pipes from freezing and the floors from being cold. On the homes that do this they usually plug the foundation vents for the winter. Many years ago electric heat was super cheap so this option was less expensive than insulating everything. Most places have gone back and insulated the floors and pipes then closed off the duct to save on heating cost

That looks like a black ABS water drain pipe (sewer pipe) right underneath the air duct. There's probably other water supply pipes under there too, right?

I'm assuming it gets below freezing in the winter, so if your crawl space had no heat the water pipes could freeze and burst if there were no heat under there. Even if it's just the sewer pipe, if it froze it could plug your sewer line, and water wouldn't drain (and it could burst too).

Insulating and sealing the pipe directly in that space wouldn't be necessary, since the end is open and you want to keep the whole space warm anyway.

Insulating the outside walls of the crawl space is an option, but you'd have to be careful to avoid creating any condensation that could lead to mould & water problems.

If the level of the soil on the other side of the foundation perimeter walls is significantly higher than inside, and if the soil has a high moisture content, then this introduction of warm dry air into the crawl space might be necessary to keep it dry. I would definitely NOT shut off the air completely and if you reduce it to less than 1/3 of the current amount you should monitor the humidity and temperature in the crawl space.

So you could try to reduce to a minimum the airflow into the crawl space from the main air handler. Heat flow into the crawl space through the un-insulated floor of the heated living space above might keep the pipes from freezing. PEX is not destroyed by freezing but obviously it is not acceptable to allow it to freeze, especially since the couplings could be damaged by freezing. Insulating the PEX and the ABS drains could be done, but is not normally done and would interfere with detecting leaks.

Not the answer you're looking for? Browse other questions tagged hvac ducts crawlspace or ask your own question.

3
Crawlspace Drainage
5
Should I encapsulate my crawl space?
0
Crawlspace Vapor Barrier Overkill?
2
What are the downsides to paving a dirt crawlspace with cement?
2
Furnace cold air return serving up crawlspace air
0
Encapsulating a cottage crawlspace built on bedrock
0
What should I do with the airflow in a sealed off conditioned crawlspace
1
HVAC Condensate draining into crawlspace