how to unscrew faucet valve stem when it's stuck?

I'm trying to replace the valve stem of a 2-handle bathroom sink faucet. All the instructions I've found online say to unscrew the nut atop the valve stem.

But my nut, when it turns, also turns the entire assembly. I assume the stem has gotten stuck to its housing.

UPDATE: I ended up removing the entire valve assembly. Then I wire-brushed off lots of gunk to get a closer look at the parts. But I still can't remove the valve stem from the rest of the assembly. I'm starting to wonder whether it's supposed to be removable.

I don’t know the model number because the faucets were installed long before we moved into the house, but the markings on the outside of the valve assembly say this: "GROHE A 98 01 R 90". A Google search yielded nothing useful about replacement parts or service info, nor did Grohe's website.

Question for anyone with experience with Grohe faucets-- are the valve stems removable? Know any tricks for unsticking a stuck stem?

I attached a new picture.

Here's the old picture from before I removed the valve assembly from the sink: 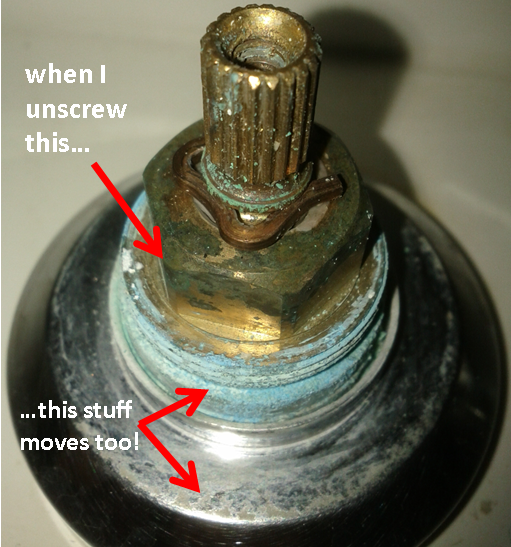 As Steven says, hit it with some penetrating oil first (WD-40 should work for this). Give it some gentle whacks against a piece of scrap wood in all directions to help break any bonds. Then clamp on to the bottom square part and try to torque the nut on top with a socket. If you still can't get it, you may find it easier to replace the entire thing.

Screw on a pipe coupling and a 2 foot pipe nipple to the side outlet. Put the top hex nut in a vise. Use the pipe nipple and unscrew the valve body and valve stem.

I have used a torch to loosen up the bathroom stem on a vise grip and a 7/8 socket if possible. The other I done it is I put the 7/8 socket handle between the wall and sink handle stopper and with a special claw sink vise grip loosen it up from underneath. The claw sink vise grip you can't find them anywhere no more. They 'res similar ones, but the teeth are so far apart and the claw is to short or to long it's hard to get a grip.

I had a Jado 1/2 inch cold cartridge. I had to disconnect the braided water lines and backed the entire valve down below the granite counter. I used vice grips where the water splits in the valve (no threads there to ruin). Then I used a large crescent wrench on the packing nut of the cartridge. It freed the nut. Then I was able to track the part number down and luckily CHICAGO has a faucet supply store. No more drips. Part cost $41.25. Thanks for the help on this thread.

I just encountered exactly this problem myself! I tried using PB (rather than WD-40), but that didn't help. What I ended up doing was inserting a thick allen wrench (any sturdy metal bar will do) into the hole on the side and using that as leverage against the wrench. With the additional force that I was able to apply, I was able to get that cartridge/stem part unscrewed.

i have this exact same cartridge style. it is called a quarter turn ceramic after some surfing on the net. this is the first time i've ever messed around with faucets but since the water wouldn't shut i did some research. the cartridge looked different from ones i saw in people's jobs and like OP i didn't know how to unscrew the cartridge (and didn't want to break anything). from OP's notes i decided to turn the nut harder and it did come free. it comes apart (the threads) right underneath where the part # is located.

i kid you not, i was going to hope to find a replacement cartridge (i know grohe's are a PITA) and reassembled everything in the meantime. the handle was loose (turned too generously) and i spent another 15 min trying to figure out why to no avail). decided to turn the water back on to check for leaks and see if anything changed, and presto! the handle was tight again (i'm guessing due to water pressure) and the water stopped leaking/running! at first it was leaking/sputtering/acting crazy but then the water would just come to a crisp halt when i turned the handle all the way shut. perhaps something was clogged or blocking the valve but that doesn't seem likely. i must have magic hands.

I had both cold/hot valves frozen with minerals. 1 day of white vinegar soaking did not help. I then did 2 days of spraying WD40 on the top of valve where it screwed in. after 2 days and then using a vice to hold the base, I used a 12" long adjustable wrench to get both unlocked and out. Without the vice and the 12" wrench for leverage, I would not have been able to get either out (it may have taken a few more days of WD40 spraying)

BillBill
1
Add a comment  |
Highly active question. Earn 10 reputation (not counting the association bonus) in order to answer this question. The reputation requirement helps protect this question from spam and non-answer activity.

5
How can I disassemble this old bathroom faucet to fix a leak, without damaging the decorative chrome piece?
2
Why is my Sterling three handle shower tub faucet leaking?
1
Stuck bathtub faucet stem
1
How to loosen traditional faucet stem?
2
Repairing a leaky valve stem
0
How to remove bathtub faucet
4
How to seal straight-thread faucet shank / nipple to the faucet?
0
Leaking laundry faucet, seems too well attached to pipe to come off
0
Removing mini wideset handles without set screws or mounting nuts
0
Remove faucet valve stem