Was it ever acceptable in the past to use 20A breakers with 14 AWG wire?

I recently bought a house which was made in 1965 and which still had the original Bryant outdoor main box and breaker, a subfeed to the original GE subpanel in the garage, and (with a few modern exceptions, which seemed to be added by the previous owner) the original GE breakers. Most of the wiring is 1960s-vintage fabric-covered, rubber-insulated 12/2 Romex which is still in reasonable shape. With the exception of some high-power circuits, like those feeding the electric oven, stove, a spa (which had been removed by the previous owner), electric dryer, and AC unit, all the circuits used 20A tandem breakers (see photo).

A neighbor having a similar house made at the same time by the same builder has a near-identical setup, with the same use of 20A tandem breakers for the branch circuits. 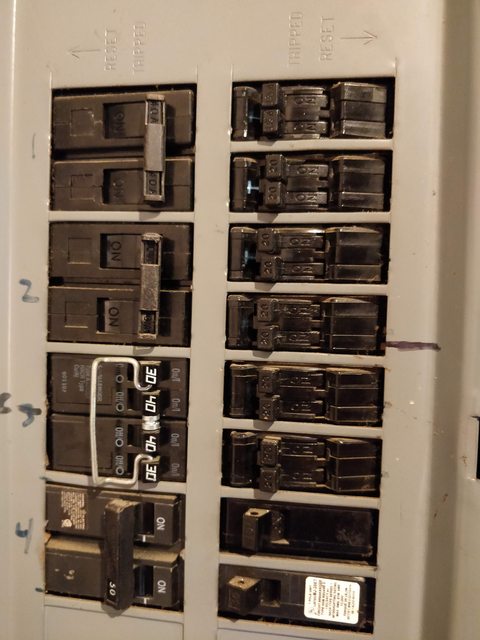 I've since had the exterior main breaker, subfeed to the subpanel, and subpanel replaced to support a solar installation. The new panel is a BR model by Eaton with more slots so tandem breakers don't need to be used. The electricians simply used new breakers of the same rating for each circuit (e.g. a 20A breaker in the old panel was replaced with a new non-tandem 20A dual-function AFCI/GFCI breaker in the new panel).

The new panel and solar installation was done by a licensed electrician and passed inspection. So far, so good.

I've been going around the house replacing old, worn-out switches and receptacles with new ones, checking for and replacing loose original crimp connections with wire nuts, etc., and noticed that several lighting circuits have 14/2 wiring but are still fed by a 20A breaker. It appears that those lighting circuits have 12/2 running from the subpanel to the first switch or fixture on that circuit, with 14/2 being used for the remainder of the circuit. From what I can tell, all the wiring is original 1960s vintage (i.e., the previous owner did not re-wire the circuits to use 14 AWG wire, it had always been that way).

Clearly, this does not meet modern code requirements and I've ordered replacement 15A dual-function AFCI/GFCI breakers to replace the 20A ones feeding circuits with 14 AWG wire to be safe.

Since the house was built by a reputable builder and presumably passed whatever permit/inspection requirements existed in the 1960s, that prompts me to ask: was it ever (specifically in the 1960s) acceptable or to-code to use 14 AWG wiring with 20A breakers for household branch/lighting circuits? Clearly this is not the case with the modern code (barring rare exceptions not typically found in a suburban home), but was it ever acceptable?

The short answer is NO. 20 amp fuses and breakers have been the rule for 12 awg and 15 amp for 14 awg. This goes well prior to your home being wired. Some one may have swapped them out over the years to prevent tripping at an increased fire risk. Because they used 12awg for the run. It also have been done by a contractor with good reputation and not caught because of the 12 in the panel. Not all states use the NEC today and back then there were more not using the NEC.

I could imagine a misinterpretation of the Tap Rules that might coax a contractor into thinking he can spur 15A taps off a 20A backbone. However the Tap Rules certainly do not apply to any residence and only apply in industrial, where your wiring will be also contained entirely in metallic conduit or raceways. Typically in open ceilings where trouble would be visible.

1
Can I install tandem breakers in this panel, and would one 20 ampere circuit be enough for a garage?
3
I need to add a subpanel for my electric car, need to know wire gauge/breaker for main
0
Add Heater to Circuit - 14 AWG to 10 AWG on 30A breaker?
0
Best choice for sub-panel and circuits for basement
4
What are good uses for tandem (double-stuff) breakers?
7
Can I use #8 wire in a 15 or 20A circuit?
8
Can someone explain this Tandem Breaker Setup to me?
3
Should Challenger “Type A” breakers be replaced?
2
Should an older Knob and Tube rubber-coated 14-gauge conductor be protected with a 15-amp breaker, or a 12-amp fuse?