Trying to replace a standard outlet with a GFCI, but found 1 white wire unused and a different white wire used in its place. What am I missing? 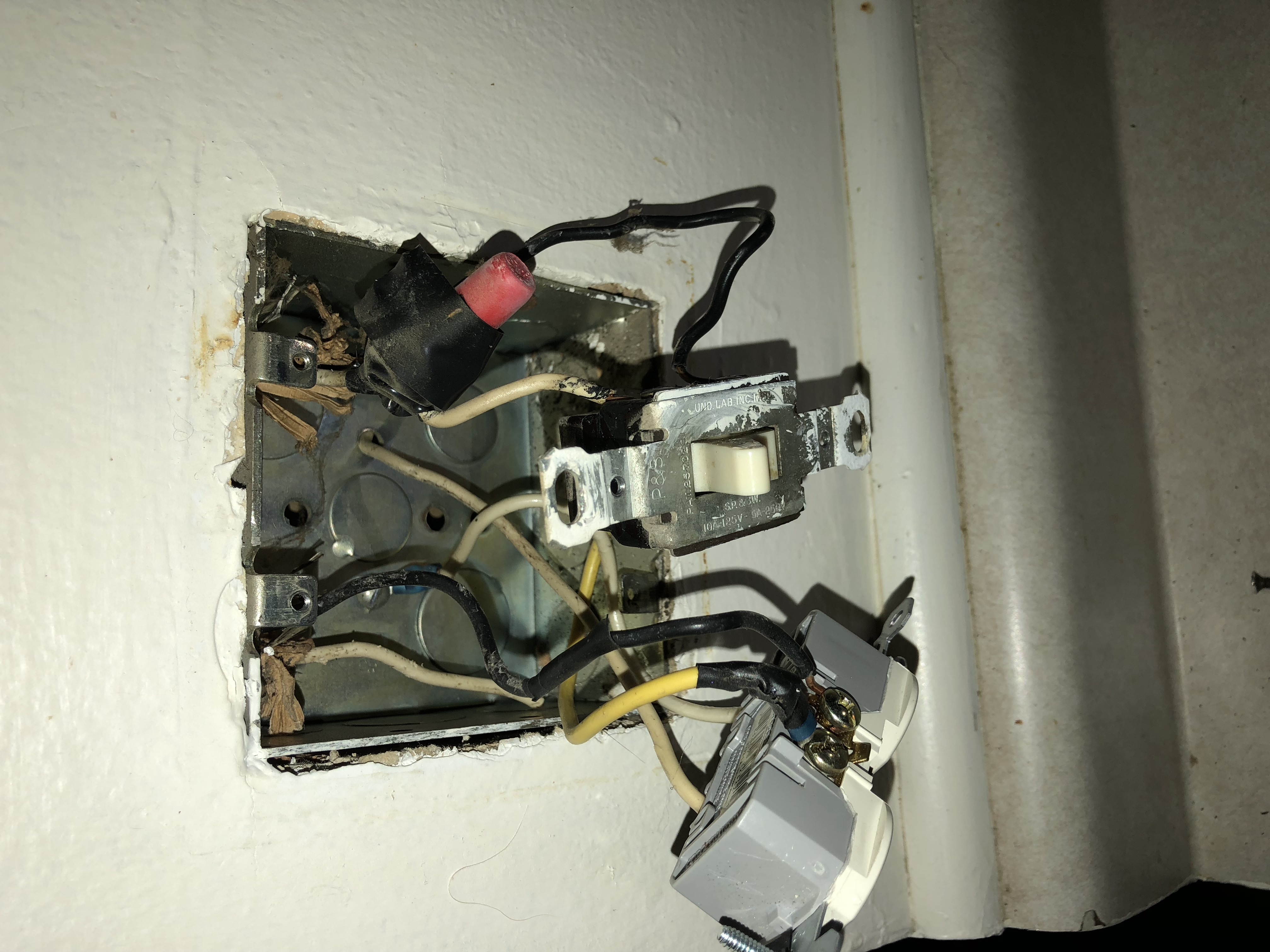 The current setup shows a switch that controls a ceiling fan. There is another switch (not pictured) that also controls the ceiling fan. Both switches also control power to the outlet shown in the picture. Don't love this setup, but I can deal with it. Main concern: The switch has a white wire on top (with the red knob) and black wire on bottom. Yellow wire goes from the opposite side of the switch to the hot side of the outlet. Everything appears to work, but the issue that causes my confusion is the seamingly random white wire that comes into the box through the round hole in the back (see picture towards the center of the box) and is connected to the neutral side of the outlet. The neutral that I would have expected to be connected is just left unconnected (hard to see but it is almost touching the left side of the box). What am I missing here? Is this extra wire from the ceiling fan, the other switch, or somewhere else?

Any help would be greatly appreciated.

OK you have one 3-way switch and one duplex receptacle in the box. The black and the white wire are the carriers for the 3-way and that is where you power is coming into the box. Then the yellow wire is the switch leg that attaches to the duplex and powers it up, along with the black wire which probably goes to the fan which we will get to in a moment.

The duplex also has a white wire that looks like it is being used as a ground to the box, but the box is not grounded or is it. You need to take a volt meter and check the voltage from the yellow switch leg when it is hot and the ground to see if you get a voltage. I am betting the white wire attached to the box is worthless.

Remember when I said we would get back to the fan. Now we come to the other white wire that appears to come through the hole in the back of the box and acts as the receptacles neutral. I would like to know where this wire comes from. Is there another box on the other side of the wall or near this box where someone has scabbed a neutral and pulled through to the box? This neutral is related to the white wire that feed down from the fan. This should be the proper neutral. Is there a reason why this neutral is not being used instead of the scabbed one? I am guessing that somewhere in the past it has failed and that is why someone scabbed in the second neutral. This is a variation of what we used to call a California 3-way. Where you are using a neutral that is not the original circuits neutral.

Conclusion: You could replace the receptacle with a GFCI but it may not operate properly since the scabbed in neutral may cause an imbalance in the circuit and keep tripping the ground fault. Also it might be ungrounded not that that causes any problems with the GFCI in fact it would be more to NEC standard that what you have in place now. You also need to find open up the fan box and see if you can trace out the original neutral and find out why it is not being used and get rid of the scabbed neutral. Keep in mind that whoever did it, they did it for a reason to correct something that was not working or originally overlooked. The only question would be how many code requirements did they violate to get it working and that leads us to how dangerous is it to an unsuspecting person?

So be careful and good luck.

Ok first let's dismiss the white ground wire. White is not a legal color for grounds. Also, you are not alowed to tape or paint white wires green to be grounds. Grounds must be natively green, green-yellow or bare. Did I mention bare? Strip the white insulation off that wire and you are legal.

The other wire is a loose white that goes through a random small hole in the junction box, which means it's a loose wire run without a cable, and not in a conduit or raceway. That's wrong at several levels.

I gather what happened here is that in the cable you'd expect the white wire to be in, the wire went dead. So rather than fish a new cable, the guy fished a new single wire. What's more alarming is that the neutral may be coming from a completely different place than the partner hot in that cable; he may have just grabbed a neutral from some other circuit.

Why is that a problem? Suppose you load that other circuit up to a full 15 amps load, and its neutral is returning the full 15A. Then you also stick a 15A load into this receptacle. This receptacle's 15A returns via the other circuit's neutral, causing it to carry 30A. Now do neutral wires have fuses or circuit breakers? No they do not! So that neutral wire heats up, potentially starting a fire.

As for the 3-way switch, I don't see any red wires in the box. I don't know how the last guy wired a 3-way switch without using /3 cable, but it's definitely wrong and bad. Both of these cables need to be replaced with new cables. The loose white needs to be ripped out.

1
Correct way to rewire for a ceiling fan + light from a switched outlet
0
How to wire half-switched outlet with two black and two white
1
How do I wire a 3 wire receiver unit to a ceiling fan that has 6 wires from the fan unit
0
Why is this switch box wired like a 3-way when there's no other switch?
3
Wiring help for a Switch with LED Guide Light
1
Extra wires in ceiling fan installation
3
Wiring a ceiling fan with black, white, red, green in ceiling box and two wall switches
1
Installing smart switches, instructions don't match my wiring?
1
Replace duplex switch with swith/outlet? Swith will control ceiling fan w/ lamp
9
Light fixture wiring - black to black, or white to black?