How can I accommodate high washing machine drain flow rates with older plumbing?

Newer machines have a drain flow rate which overwhelms older drains, and there's no adjustment. The only answer I ever hear is tear up your floor and put in new bigger drain pipe. That is not an option in some cases.

Getting an older machine isn't feasible because it's starting to be hard if not impossible to find parts. Is there any way of cutting the pressure down so it doesn't back up and flood the floor in older homes?

As mentioned in other posts, in the old days, we had laundry sinks/tubs that the washer drained into. The tub would fill up and then slowly drain. The tub acted as a "buffer" to temporarily hold water until the drain would catch up. My solution was to replace the 1 1/2" drain pipe with 3" pipe. I used a 3 to 1 1/2" reducing coupler to mate with the existing drain, connected 24" or so of 3" pipe, put another reducing coupler on top for the hose to go into. The top reducing coupler is just so nothing accidentally falls in. A 3" pipe holds 4 times the amount of water that a 1 1/2" pipe holds for the same length (a 4" pipe holds 7x the water!). The 3" pipe mimics the old laundry tubs. Newer HE washers use a lot less water so we don't need big tubs. Here's a picture: 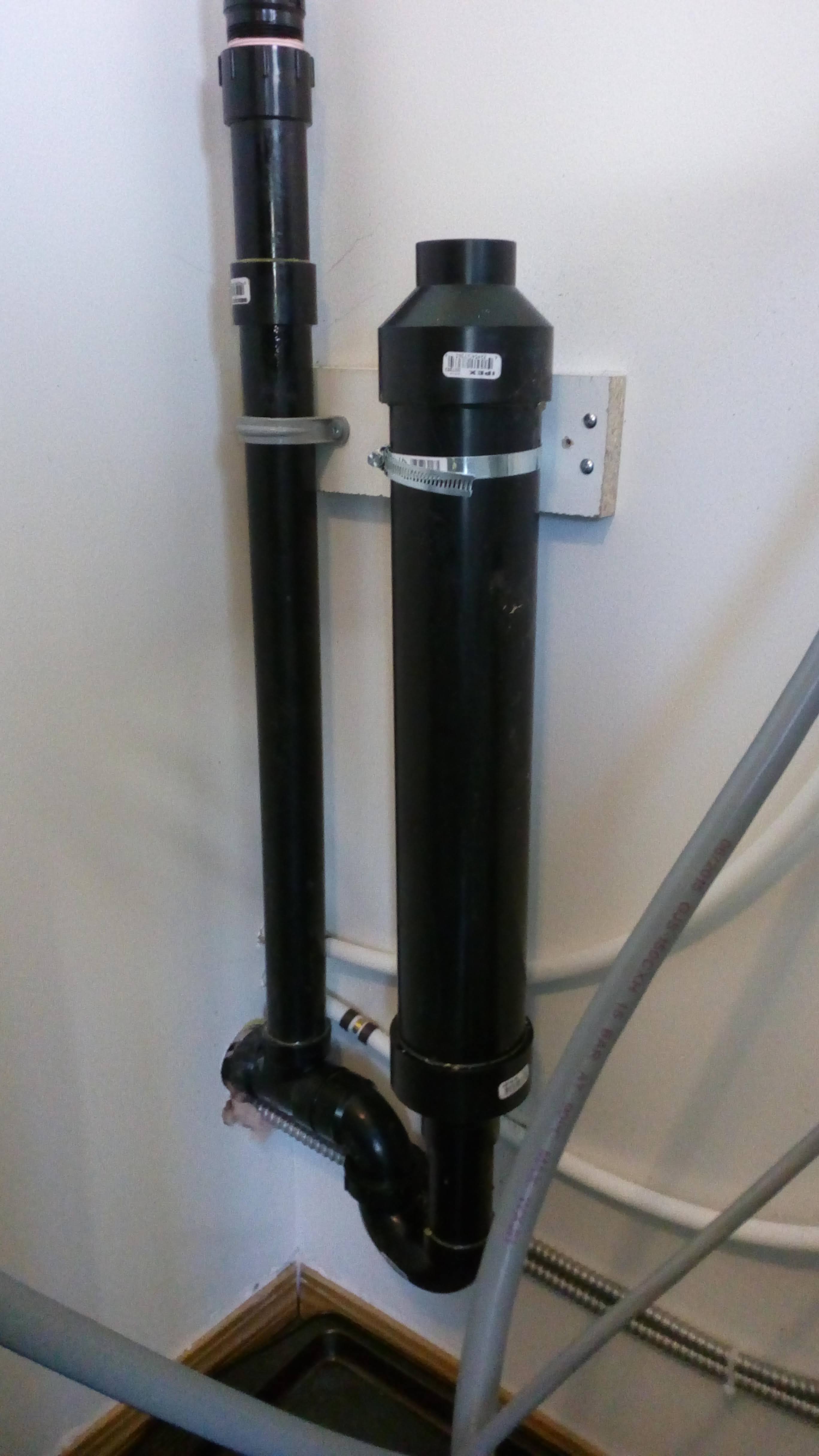 You could try building your own washing machine "sump".

Build a temporary storage tank for the water from your washing machine. You could use a (plastic) drum or bucket with a capacity which exceeds the total water capacity of your washing machine by at least 50% (100% or more would probably be better to be on the safe side).

Let the washing machine drain into the temporary storage.

In the temporary storage tank install a (sump) pump with a flow rate that matches your home's drainage system. The pump can the either be manually operated or have an automatic switch to turn on when a certain amount of water has been pumped into the storage tank. Make sure the pump used can handle the occasional solids that may be ejected by your washing machine.

In The Netherlands a company sells a product which can also be used in this situation, here is the company's site. The site is in Dutch and French but you should be able to get the gist of it or use google translate. I'd assume that in your country comparable products would be sold.

The answer is to install a large(r) standpipe.

For outside the wall traps, it is relatively simple to build a larger diameter standpipe out of ABS or PVC pipe, adapting it to fit into the existing (or better, newly replaced) trap.

For inside the wall setups it is a bit more invasive but still DIY feasible to open the wall and remove the original galvanized standpipe, plumb the trap to the outside of the wall, and build a larger diameter standpipe as outlined above.

The larger standpipe gives more holding capacity to allow your old crusty occluded drain system time to drain down prior to overflow.

I have "fixed" several issues like yours with 3" ABS standpipes. Another option is the old laundry tub trick.

One reported solution is to put a restriction fitting on the back of the washing machine. Obviously this could damage the washing machine if the pressure inside rose too high or could cause a leak inside the machine. But maybe a modest restriction would reduce the flow rate enough to prevent drain overflow without causing these negative effects.

Our new Samsung top loader has a larger drain line than our old Maytag and a different type (but we have not had any overflows from the 2" down-tube). Maybe a change to the old style of drain hose would allow plumbing in a PVC ball valve or maybe a smaller diameter drain hose would by itself restrict the flow enough to prevent overflow.

Perhaps one could plumb in a 1" or 1.5" PVC ball valve so one could adjust the resistance to achieve no overflow with the least restriction.

03-08-07, 10:44 AM formula formula is offline Member Join Date: Jan 2007 Location: Central Indiana Posts: 389 Even though GregH told you, "No, You can not slow down the flow of the washer", this is precisely what you can do. I've done it to solve the exact same problem.

There is nothing sacred about a washing machine pump. It's just a centrifugal pump; if it has to pump against a little more restriction, it really doesn't care.

I lived in a house built in the mid 1960's and the plumbing drains just weren't done properly; not enough venting, and not enough flow capacity. The washing machine would overload its drain and start overflowing.

A solution to your problem is to put a restriction in your washing machine discharge hose to slow down its flow to what your drain can handle. Just don't slow it down to the point that your washing machine timer times out and goes on to the next step in the cycle! I think I used a copper reducer fitting (copper solder fitting) that would fit inside the discharge hose and reduce down to 1/2" or so. I placed the fitting inside the drain hose where it connects to the back of the washing machine and then put a hose clamp around it to hold it in place.

i use a switch. Put floating lever on top of the drain pipe, and when the overflowing water hits it, the switch disconnects the relay and shuts the washing machine power.

An alternate, unexpensive option without any changes to the building or plumbing might be a phase control unit which is directly inserted to the hot wire to the drain pump motor. F.e. many modern vacuum cleaners have such a unit to change/adapt the power of the ca. 800W vacuum cleaner motor.

The drain pump does normally not have more then 200W (typical 50-120W), but it lacks the air flow of a vacuum cleaner which is used to cool the triac. Due to its construction and low efficiency the drain motor needs some minimum power to reliably start under load - the dial should be adjusted accordingly.

These phase control units - which must be suited for inductive/motor loads - are available in the Internet for a low budget or even free at the next recycling yard, where many vacuum cleaners can be found. This method requests some skills, knowledge and precaution, the drain pumps of washing machines are normally supplied by the dangerous line voltage. It should be done by an electrician.

Via this phase control the drain pump throughput could be adjusted just like the motor of a vacuum cleaner.

I have been using washer hose reducers in some of my older rentals. There is no damage to the pump and actually reduces the load on the pump due to the reduce amount of water it has to pump. You have to test how small you need to reduce by running a draining cycle and wait to see if it starts to overflow. Works great.

Not the answer you're looking for? Browse other questions tagged plumbing drain overflow or ask your own question.

1
New washer overflows from the stand pipe
1
How can I accommodate newer washing machines with older drains?