How do I determine if a wall can be removed?

I don't know much of anything about load bearing walls so I can't really decide how necessary this wall is.

So the space for my fridge is 35" almost exactly. Less if you count the trim on the floor. As many of you are probably aware, most larger fridges are 35.5" in width. This makes it extremely frustrating as only about a half inch is keeping me from upgrading to a well needed larger fridge. So, I'm thinking that I can remove this wall. I'd just need to relocate the light switch. But I'm wondering if this wall is important or not, and how I can go about figuring it out. 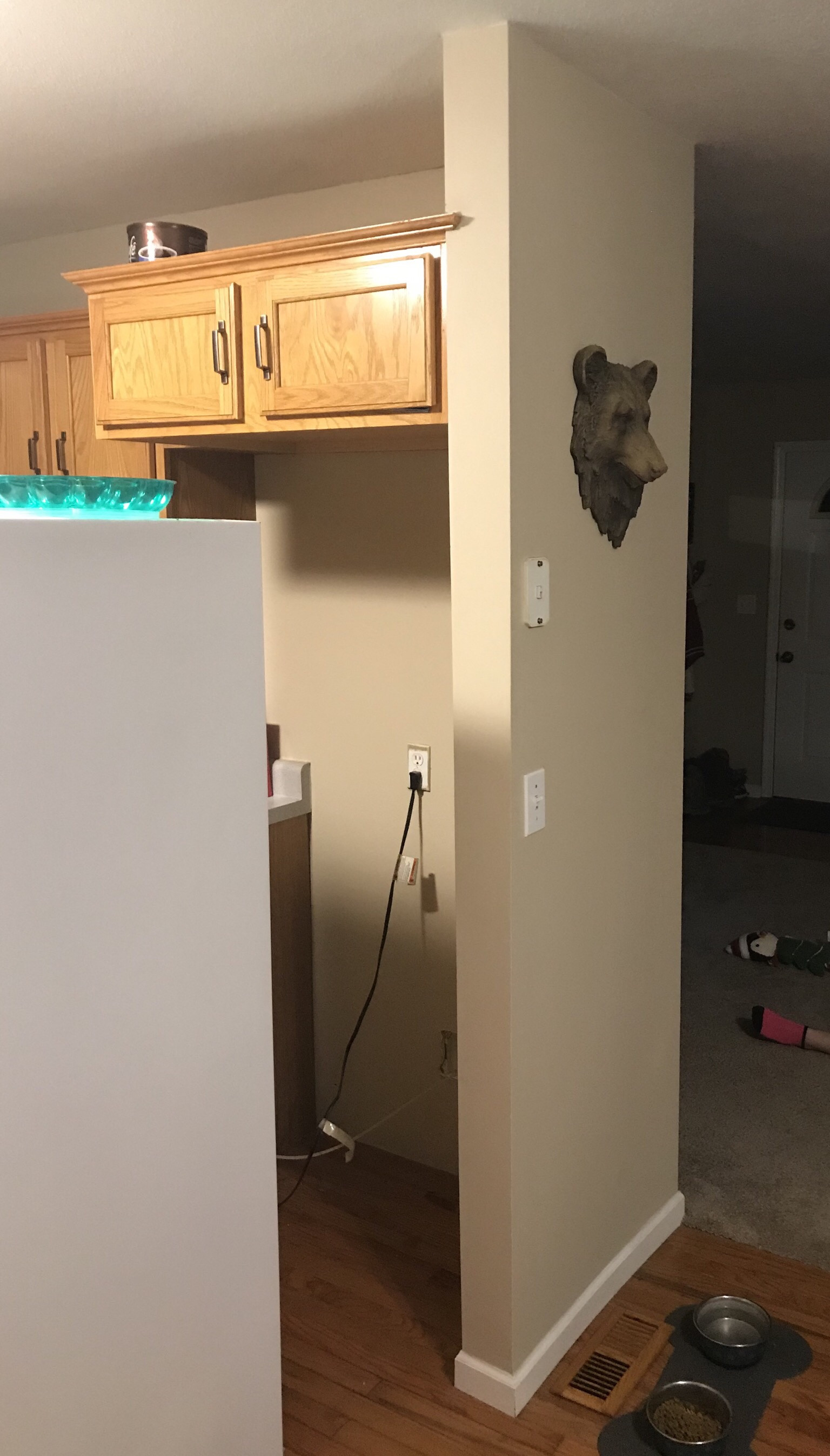 For the wall to be structurally important, it could 1) have a post located in it, 2) be a load bearing (vertical loads), or 3) a shear wall:

Don’t forget to check for a plumbing pipes or electrical service lines in the wall that will need to be relocated.

I’d check to see if there is a duct in the wall that connects to the floor register shown in the pic too...but it could be re-routed.

You’ll also need to fill-in the floor material when the wall is removed.

BTW, if the wall needs to stay (for an electrical line, plumbing pipe, etc.) you could keep the wall by turning the studs 90 degrees and reinstalling the gypsum board. (It could make a nice visual barrier too so you don’t need to look at the side of the fridge.)

Comprehensive advice from @leesam, but if you're only 1/4" out, you could pull the (presumably) 1/2" drywall and replace it with 1/4". Know that 1/4" drywall is flimsy, so you'd want solid backing at the very end of the wall that will see human contact. Since you're squeaking in, you might have to cut the overhang off your countertop, if it's there (not absolutely clear to me from the pic).

(Very low chance of this working for you, but doublecheck to see that there isn't a decorative panel on the end of your adjacent cabinet that could be removed and gain you another 1/2".)

Not the answer you're looking for? Browse other questions tagged walls demolition or ask your own question.

2
What kind of fastener should I use to hang things on cabinets?
6
How can I determine what's behind a wall?
1
What does a novice DIY'er need to know before building a wall higher than 8' (14.5' feet to be exact)?
2
Fixing cracks in a cinder block wall
1
What is the side load bearing capacity of wood screws?
0
Installing a fridge inside a wall?
1
Weight distribution in load bearing wall?
6
Can I partially suspend an angled climbing wall from my garage trusses?