My toilet has a slow but continual trickle of water running from the rim into the bowl. I presumed this was a misaligned float but when I pulled it up to its maximum height, the flow didn't even stop.

Looking it up it seems that the "flapper" is the most common cause of this problem. However I'm not a plumber and I can't map any of the diagrams of photos I've seen with my actually toilet fixture. Here it is 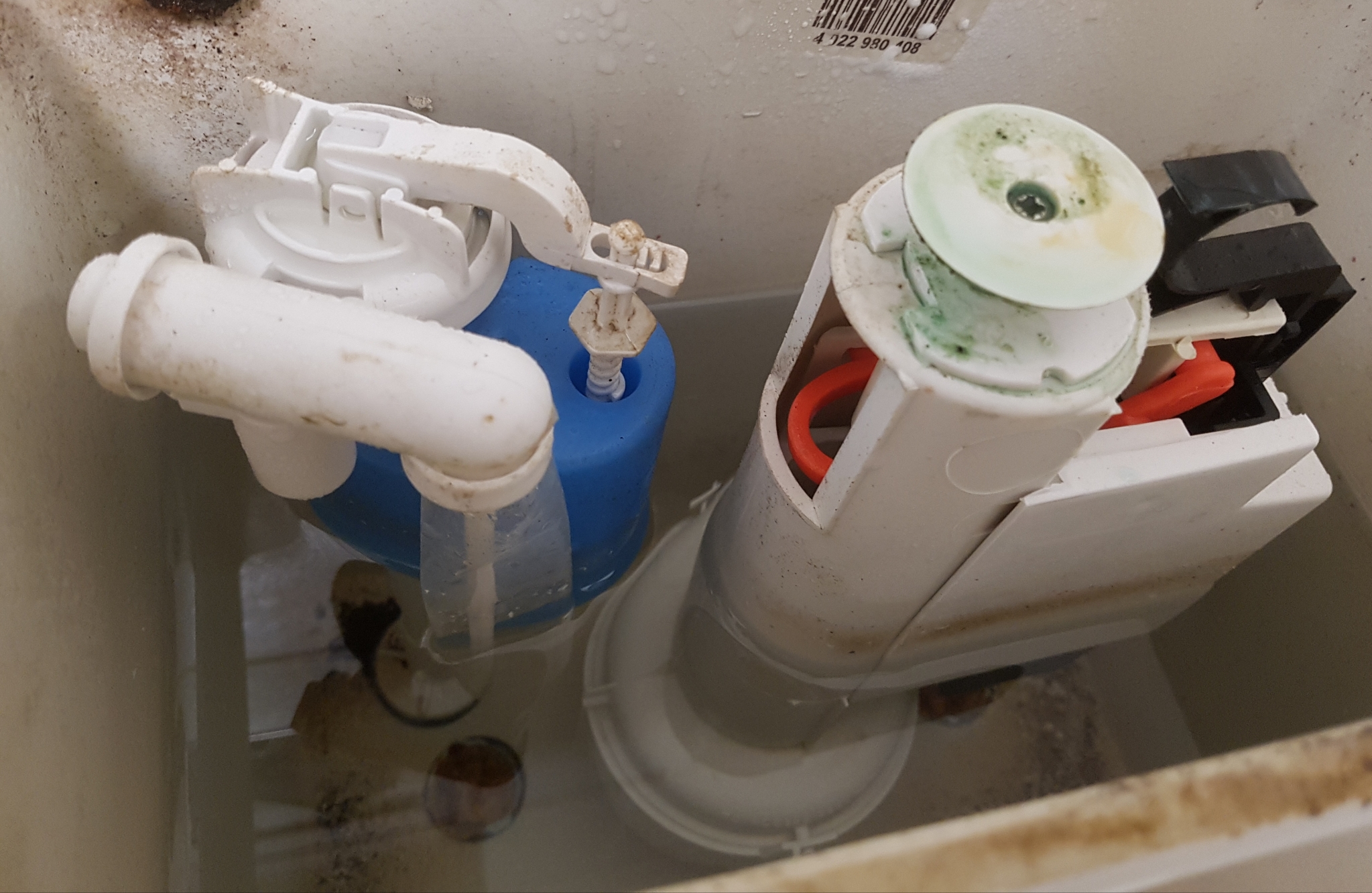 How do I make sense of this plumbing and find out what's causing the leak into the toilet?

Since you have a push-button toilet, you don't have what would traditionally be considered a "flapper". Flush-arm toilets have a hinged rubber stopper that's attached by chain to the flush lever, which opens when you rotate the handle.

Your toilet has a valve in that big cylinder on the right that acts in the same manner, being pulled up in different degrees when you push one of the two buttons. Underneath the bell-shaped bit at the bottom, I'd expect to find a gasket that keeps water from trickling into the bowl. Possibly the gasket is worn or bits of debris have gotten stuck under it, allowing some water to escape.

There's also the possibility that the gasket that seals the hole when the valve is closed is similarly worn in a way to allow some water past it when it's closed. Either way, turn off the water to your toilet and empty the tank (flushing usually works), then take out the right-hand part and see if you can determine where water is getting past the seals. I'm not overly familiar with this type of toilet, so I don't know if the seals can be serviced by themselves or if you need to buy a whole new flush mechanism.

The other half is your float and water inlet, you shouldn't need to worry about that if you've ruled it out as the culprit.

4
Stuck, leaking water shutoff valve to toilet
2
Kohler One Piece Toilet plumbing
1
Toilet Tank slow leak, have all new parts, tried all troubleshooting...help!
1
Small trickle into toilet bowl, flap and valve seem fine
1
Installed LASCO MagnaFlush Toilet Tank Kit, Now Toilet Runs All the Time?
0
Toilet weak flush. The water in the bowl swirls, but it didn't flush stuff into the pipe
0
Toilet constantly making a noise
2
Fluidmaster toilet fill valve not shutting off water
2
How can I be sure if my toilet flapper is broken
0
Locating toilet tank leak: flapper or flush valve or tanks bolts and washers