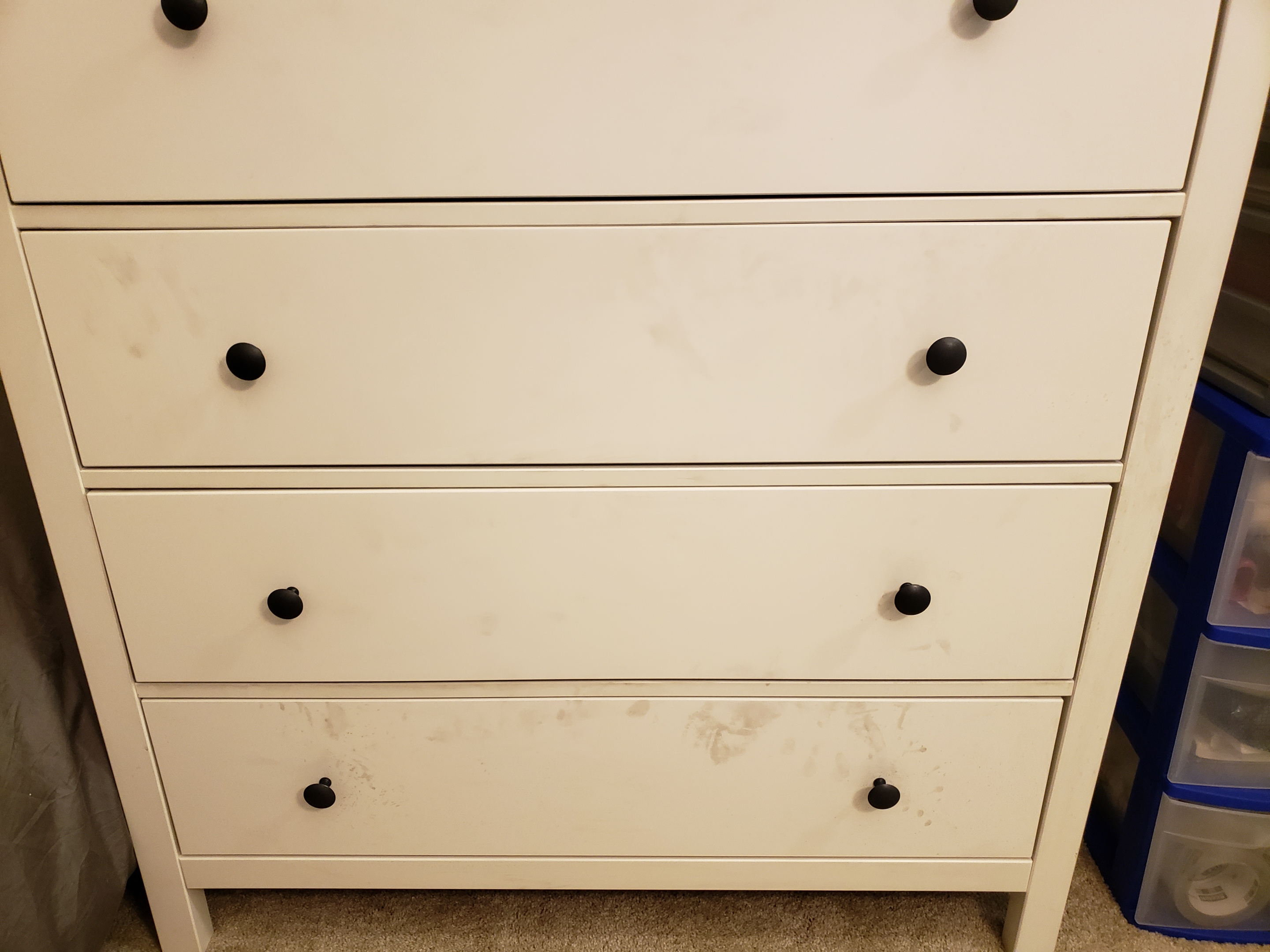 UPDATED:
Hopefully this is a good place to put this. I figured someone might have an issue similar from project prep or HVAC issues. I have a Honeywell AirGenius 5 portable tower air filter. It has a washable filter and optional odor-reducing pre-filter (HRF-K2, installed). Apparently this is activated charcoal but never says on the product site or box.

My issue is there is this hardly visible layer of charcoal dust everywhere. But it is weird. It doesn't show up usually until I touch it. For example, pictured is my white dresser. It looked fine until I saw the very light and even tint of the dust on it. I took a wet paper towel and wiped it and results are pictured. If I were to rub my hand across it, it will leave black marks as if my hands were dirty but I assure they're clean. Is this charcoal lumping with skin oil? If I move furniture or items, there are outlines of black where items weren't.

Now I've had this since May. I never noticed any issue. I've washed the filter sets twice which just includes running it under water. Here's one thing I can think of. The pre-filter, I was under the assumption that it is also washable (my mistake) under water but instructions don't mention that at all. It does not mention not-washing it. The thing is, the dirt feels like it's pretty much stuck on there. I've tried household cleaners, dish soap, harder chemicals, and it's not moving. It ruined my one wall so I have to repaint it. This dresser is something i just got and now I might have to do major work on it. Even if it were say, charcoal dust, I feel like it shouldn't be acting like this. I've contacted Honeywell for assistance to no avail.

Does it make sense that this air filter may be doing it? I'm pretty sure it is it because I had it in one room and the dust was all over a nearby wall and furniture. And then moved it to the current room, and now this dirt has appeared there where it wasn't before. This is a recent problem. The first time I wash the filters was probably back in July and I didn't noticed the dirt until a week ago, when I moved it to the other room and the dirt appeared 5 days later. My next step would be contacting my apartment management to have my air filters checked. Could it be something else? I burn candles but they burn cleanly. I also burn incense but I haven't burned any for a while. Any advice on what to possibly try to remove this stubborn residue would be helpful too.

I am going to dispose of the current pre-filter and either use the replacement or not use it as it's optional.

Edit: I tried using a block eraser on the dirt and seems to have kind of worked, although not it's not ideal. I'll try more tomorrow. This dresser is made of wood with some sort of gloss finish like polyurethane. It's an Ikea Hemmes if I remember correctly. The drywall however, doesn't seem to have any luck so I'll repaint that. I have a Rubbermaid trash can that got the dirt on it and a simple paper towel and water took it right off.

So I was in contact with Helen of Troy, who manufactured the air filter under the Honeywell brand. Sent the unit in for testing and it turns out it was an ionization unit, which I look through multiple product pages in the manual and nothing in it ever mentioned that technology. So the test results concluded that certain particles in the air, but my guess is from burning Yankee Candles, would pass through the ionizer and then the dirt particles would stick to the candle soot and attach itself to surfaces. So if you like to burn things, don't use a portable air filter with ionization technology. Use one with replaceable HEPA filters.

Not the answer you're looking for? Browse other questions tagged cleaning air-filter or ask your own question.

4
Why is my furnace filter alarmingly clean?
0
How can I determine what grade air filter is appropriate?
0
How can I determine what size and type of filter is required in my air handler?
2
Does my furnace's air filter do anything at all?
2
Air filter recommendations to filter dust mites
1
Anything wrong with moving from a washable mesh HVAC filter to disposable?
1
Both reusable and disposable furnace filter?
0
Air conditioner HVAC filter size and frequency of change
1
Wildfire smoke : old electronic air cleaner or normal pleated filter better?