This seem redundant since all EVSE (Electric vehicle supply equipment) have GFCI built into the unit. I was wondering if this refers to the 120v (hot-neutral) type outlet only. I got a regular 40A breaker (2 pole) for my outlet but, if I read this right, I need to upgrade to a 40A GFCI breaker? $100, ouch!

If you hard-wire the EVSE unit, then you're covered because the unit has GFCI built in and you never have an open unprotected receptacle.

Presumably you are talking about a residential application in the U.S., since you seem to be doing it yourself and you are referencing the 2017 N.E.C.

This applies whether your 240V supply is single-phase or 3-phase (in which case it will probably be 208V).

As a curiosity, it might be worth mentioning that if you're dealing with a 3 phase service typical of commercial installations (say you're doing this at a rented commercial office or store space rather than at home), then your service is probably 3-phase with neutral, in which case your outlets will either be 120V, or 208V (there is 120V of potential from any of the phases to the neutral, and 208V from any of the phases to another phase). 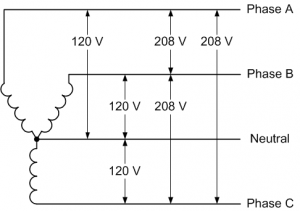 In a residential situation, you are served by a single phase (from the 3 phase distribution lines), which is stepped down to 240V in the transformer outside your house. This is split, in the transformer, by a center tap neutral into a pair of 120V legs. This means you get 120V from either pole to the neutral, and 240V from pole to pole. But either way it is still only 1 phase.

The poles of your residential transformer are 180 degrees out of phase with each other, because the AC sine waves are shifted 180 degrees apart. I believe this is one of the sources of occasional confusion, and this plus the fact that both circuits derive from one phase is one of the reasons that some people refer to the 120V legs as "phase legs", and is also why some people sometimes seem to perceive "phase leg" slightly differently than other people. The bottom line is that this entire setup is a branch circuit off of just one phase of the nearest 3 phase transformer that ties you into the long haul power transmission lines that serve you. Thus, the entire 240V circuit that feeds your house, and both 120V legs of that circuit, are all one phase. And yet the two 120V legs actually are out-of-phase from each other. 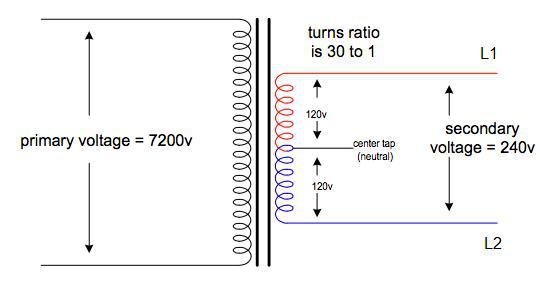 But again; if you are connecting the EVSE (Electric Vehicle Supply Equipment) unit to an approved power source, and you hardwire it in, then you are covered by the GFCI built-in to the unit because you don't have an exposed, unprotected receptacle.

If you run power to a receptacle that you then plug the EVSE into, then you're probably required to use a GFCI breaker because you have created a situation where there may be an open receptacle in an area that requires GFCI protection.

In the North American residential universe, all 240V service is not single-phase, it is split-phase. i would say that is not the same as single-phase.

Regardless, it clearly only applies to receptacles. Hardwire the unit. Badabing!

Short answer, yes, with only two poles, you can only have one phase. The 240VAC originates from a single transformer winding source.

There is a subtle issue at play here, the term "for personnel." Equipment may say that it has "Ground Fault protection", but here in the US, the term "for personnel" requires a SPECIFIC type, referred to as "Class A Ground Fault Protection", also referred to as being a "Ground Fault Circuit Interrupter" (GFCI). Those are SPECIFICALLY DEFINED terms for a device that trips at 5mA of current (no less than 4mA, no more than 6mA). The term "Ground Fault Protection" is more generic. It MIGHT be inclusive of a GFCI, but it could also be what's officially called GFP or GFPE for "Ground Fault Protection (of Equipment) and could trip at 30mA, 100mA or even upward of 25% of the circuit rating! Anything more than 6mA does NOT qualify in this country. 30mA however DOES qualify in other parts of the world, so you must be careful because some overseas suppliers allow you to BELIEVE that it's fine, and you find out it was not when an inspector red-tags your installation.

So if your charger SPECIFICALLY uses the term "GFCI", or "Class A Ground Fault" not just "Ground Fault", then you are good to go, no need to put it ahead of the charger too.

In both 1 AND 3 phase systems all single pole and double pole breakers are referred to as single phase. The only time it would not be 1 phase is when supplied by a 3 pole breaker. Also, some folks will confuse the matter even more by calling it 2 phase because a double pole breaker is using 2 of the 3 phases of a 3 phase system, but it's not proper nomenclature. In actuality, 2 phase is all together a system of its own, distinct from 1 and 3 phase.

In the current 2017 NEC the wording for 625.54 is suffering as it has not taken into account the subtle ambiguity of electrical nomenclature and this is why a revision for the 2020 NEC was adopted and reads currently as "All receptacles installed for the connection of electric vehicles..." The wordings for 150V to ground and single phase where removed.

Now, the code section also specifies receptacles. Thus, a direct wire charger would not apply to the GFCI protection.

Some theory: A phase is regarded as one complete cycle through the coil. The coil is the windings of copper around the iron core of the primary and the secondary side of the transformer. For the common U.S. residential "split" single phase, from the start to the end of the secondary coil will be 240 volts. Remember voltage is oscillating back and forth and this can be mathematically represented as a waveform. Thus, a wave has a positive peak and a negative valley. We center tap the wave ( the calmest part of the wave where the voltage is 0 ) and call this the neutral/grounded conductor. Now since the wave is a function of time, we use the root mean square to find the average of the peak to peak voltage which is nominal 120 volts.

On a 3 phase WYE system, we still use 1 phase but now we have 3 and they all share one neutral. The math works out a little differently, ( i.e. 120° between each of the 3 phases instead of 180° split phase difference ) which gives 208V phase to phase and 120V to ground, but pretty much the same principle.

Not the answer you're looking for? Browse other questions tagged electrical electric-vehicle or ask your own question.