Swapping wires in electrical panel to move outlets to different phase of service. Is this safe?

I need two nearby outlets in my house to be on different breakers and different phases of the service. The outlets are currently each on different breakers, but each is on one of the poles of a two pole 20 amp breaker so they are on the same phase. They are #13 and #14 in my panel. If I swap the the red wire(#14) with the red wire from the two pole 20 amp breaker below(#15) as shown in the picture it does the trick. Both breakers are 20 amp so I think this should be ok. I just wanted to see if there is any reason I shouldn't do this? Thanks! 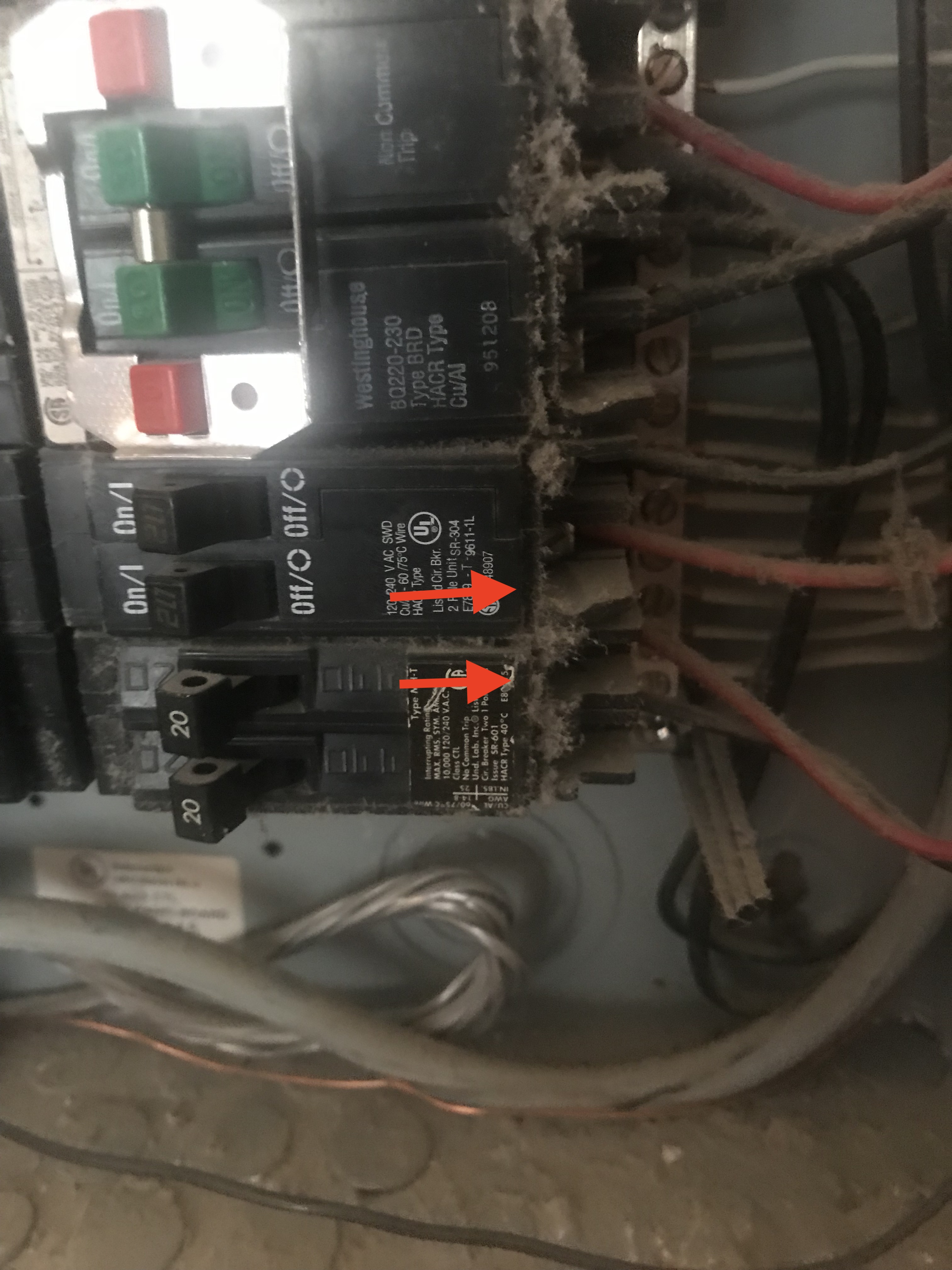 Inside the panel door 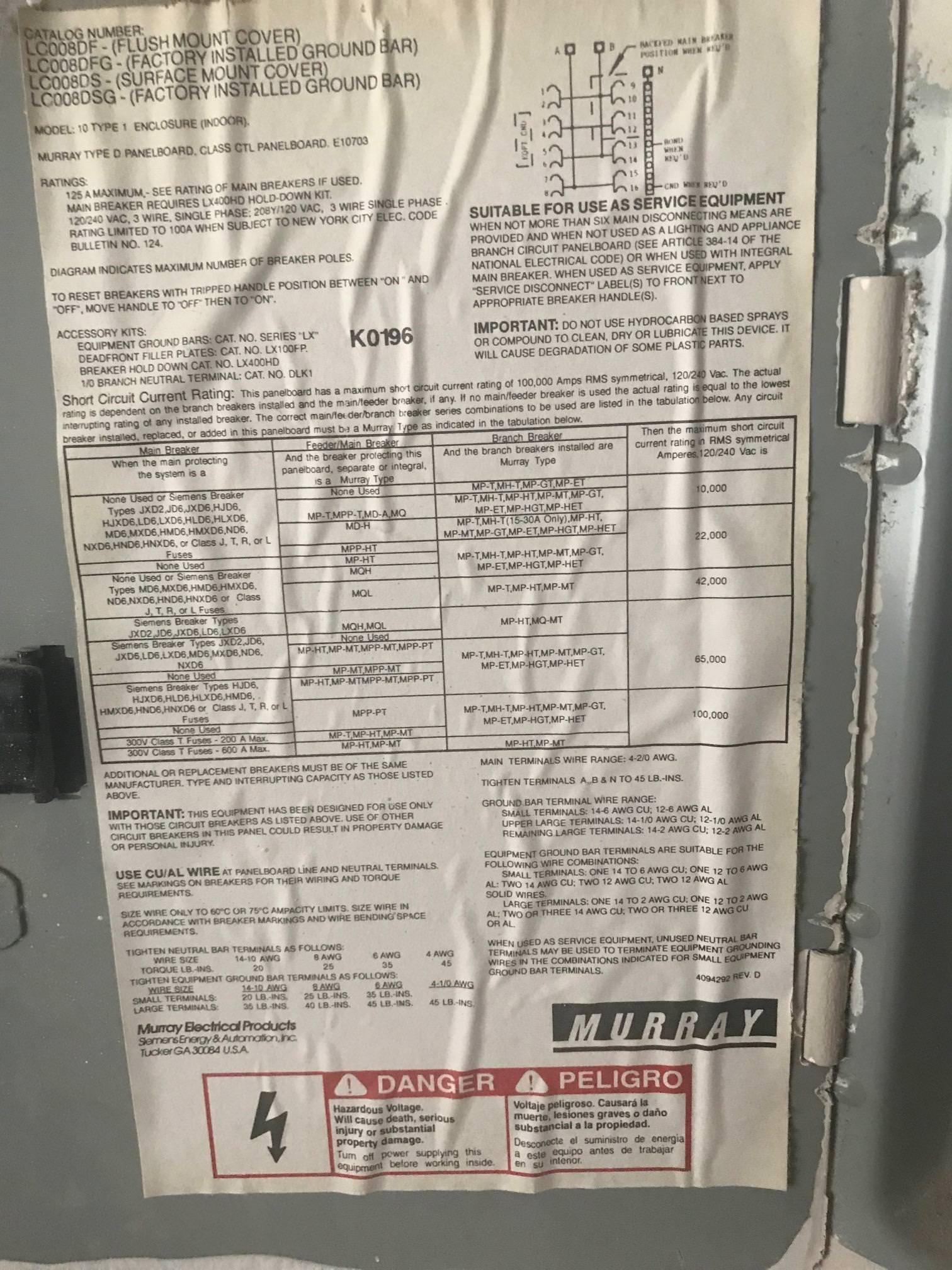 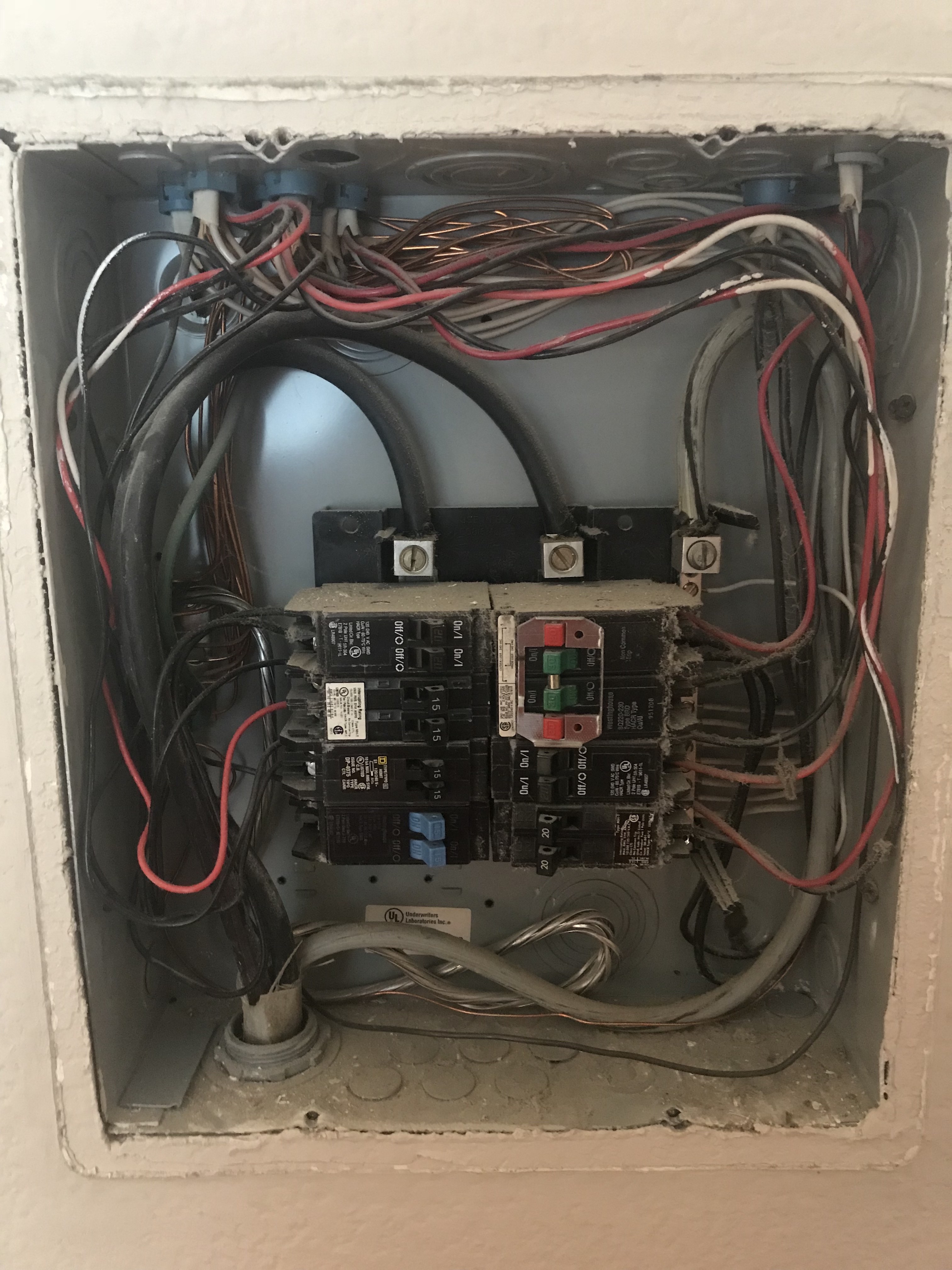 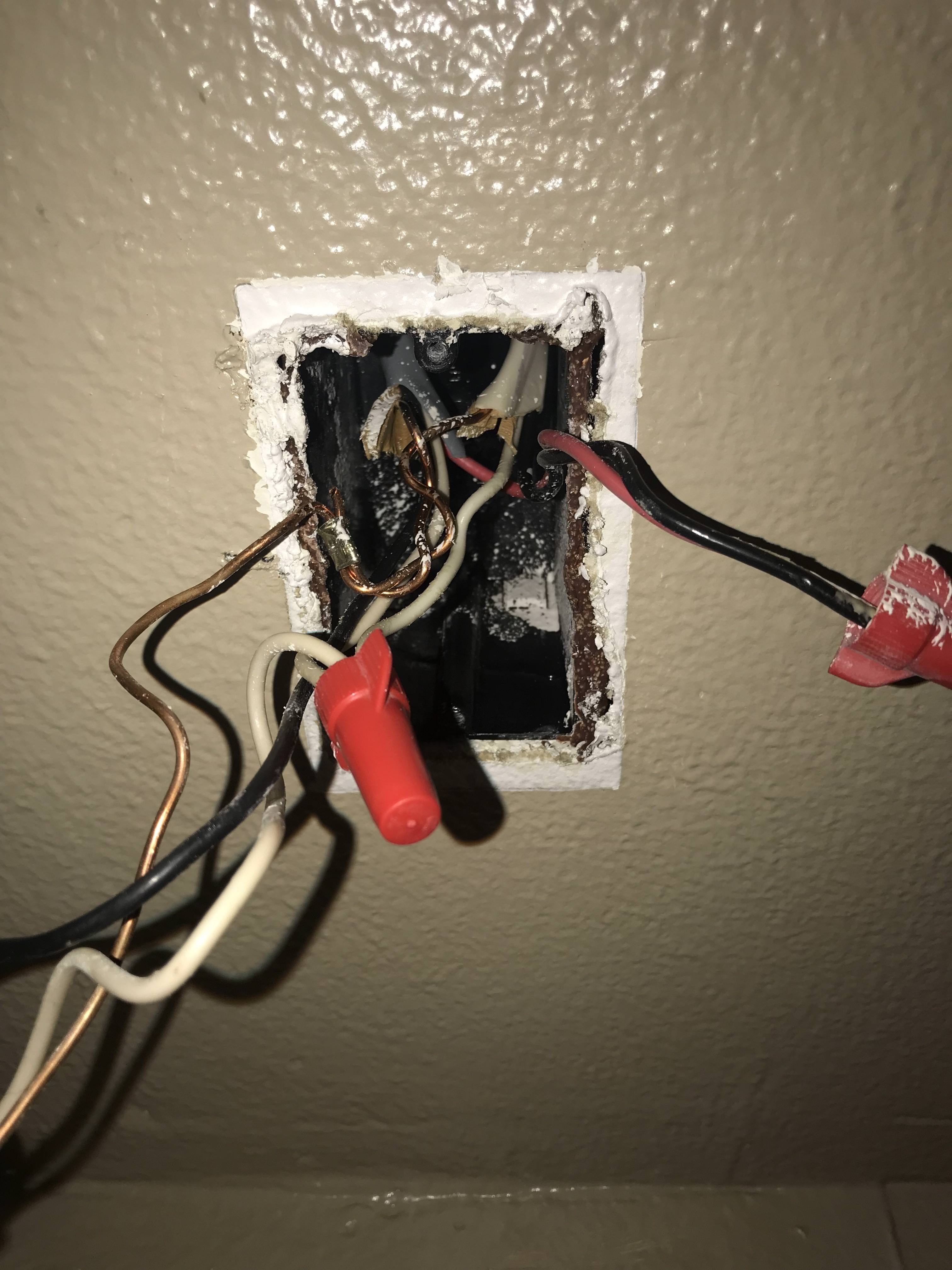 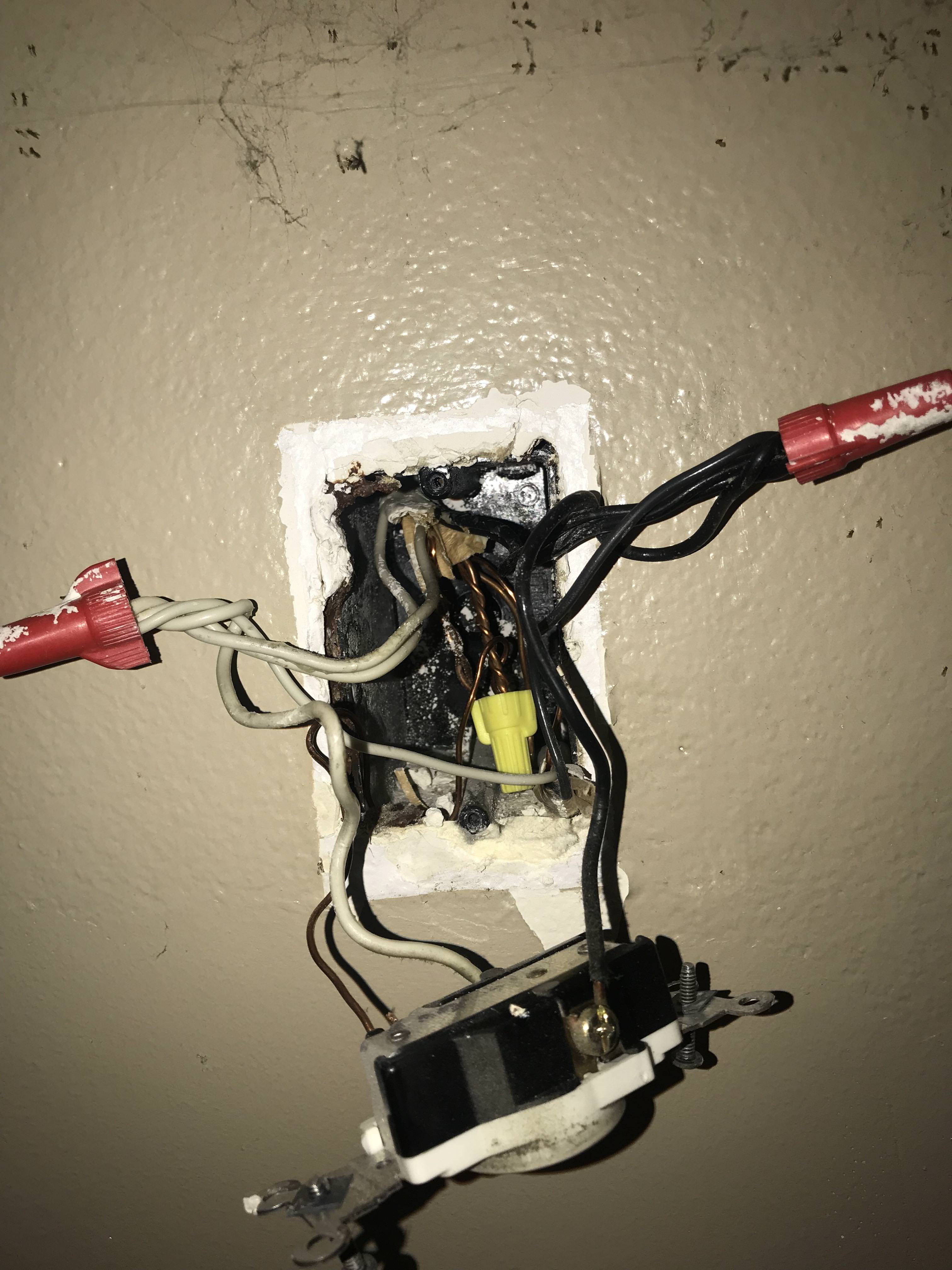 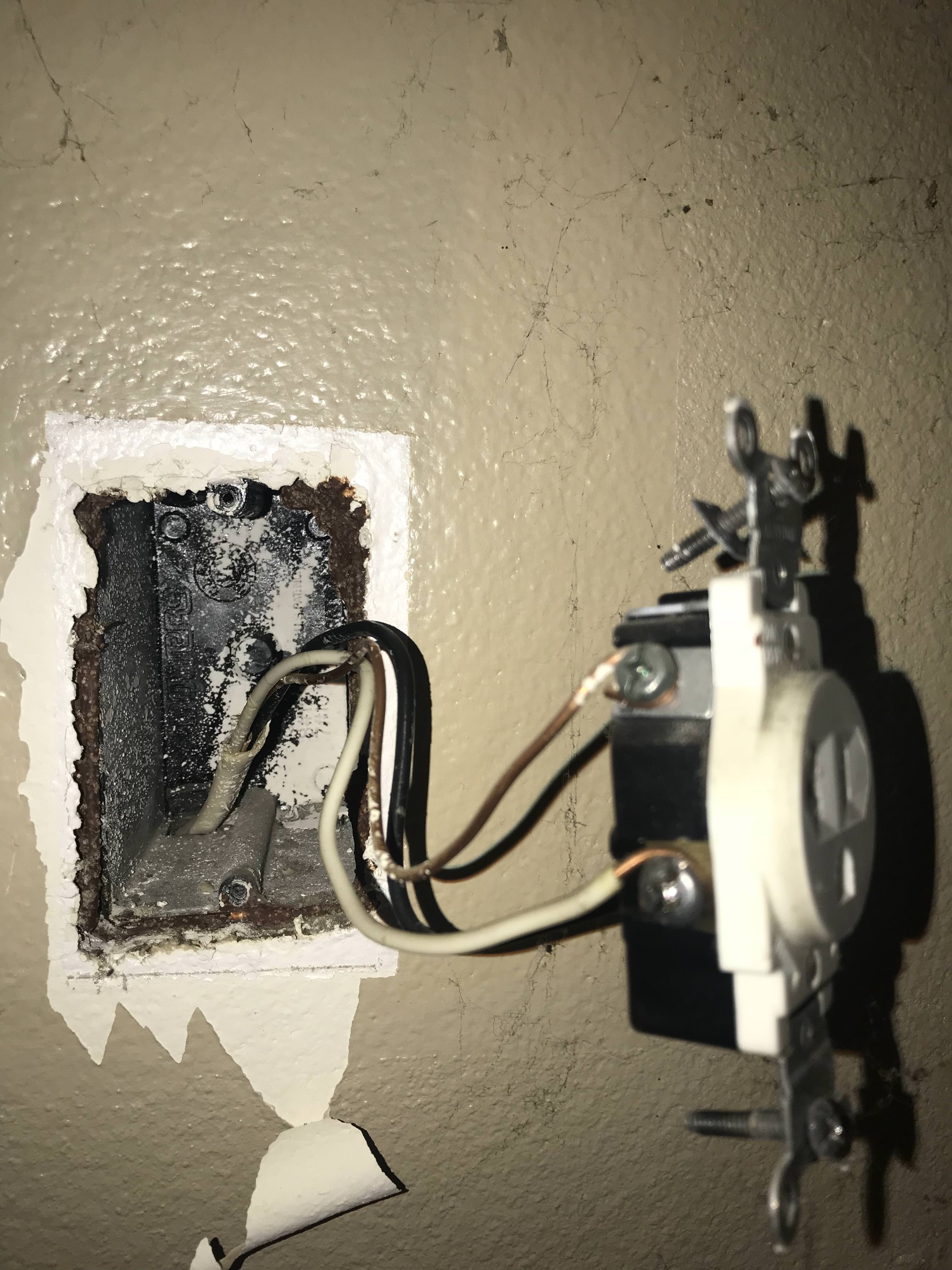 Not only do you have the mis-wired MWBC pair in #13/#14/#15/#16 trying to slow-cook a couple of neutral wires, you have a bigger (in terms of time and cost to fix) problem with this panel, namely that 75% of your breakers don't belong there as they're the wrong type for the panel you have. Furthermore, it appears that most of your MWBCs do not have a means for a common maintenance shutoff, which also is a Code violation.

As a result, this isn't just a matter of swapping a couple of wires around and washing your hands -- you'll need to replace 75% of the breakers here just to bring it as close to Code as practical for this panel, given that putting a bigger panel in would make this a far larger job.

Whoever put this panel in was penny-wise and utterly pound-foolish, as they put in a panel that was basically half (or less) the size it should have been. This forced them to use double-stuff breakers, which provide two breaker mechanisms and handles in a one-space package, connected to the same leg or phase of the incoming service as they share the same contact clip that attaches them to the busbar.

These double-stuff breakers are different from two pole breakers, which have two contact clips on their back and take up two full width spaces, allowing them to attach to both busbars and provide access to both legs of the feeder, and power things that require 240V as a result. Of course, one can have a breaker that's both a two-pole breaker and a double-stuff breaker. Those are called quadplex breakers, and one can be seen feeding circuits 9-12 in your panel -- each pole-space contains two breaker mechanisms, with the inner pair and outer pair tied together.

It seems that whoever wired this condo wanted to save a few pennies on copper, so they made heavy use of multi-wire branch circuits (MWBCs) to wire it. In short, because North American light-duty electrical service is delivered as 240V but with the neutral point set halfway between the 240V legs, if you connect two 120V loads in series and connect the neutral wire to the midpoint of those two loads, the only current that returns down the neutral is current that flowed through one load but not the other load, allowing one neutral to be shared between the two hot wires.

However, this requires the hots to be on different legs, and also requires both hots to be shut off simultaneously when you go to turn things off for maintenance work so that you don't get bit by hot B when you're working on something attached to hot A. Right now, your miswired situation at #13/#14/#15/#16 has neither of those properties, which risks you getting shocked (if you only turned off one of #13 or #14 to work on the garage outlets, for instance), and also is busy trying to light your house on fire, as now you have two hots on the same leg trying to share a single neutral, potentially pumping 40A down a 12AWG wire only rated to handle 20A. (The situation with #4 and #6 only has the former problem, while #9 and #12 are somehow correctly wired to their breaker, but that has other issues which will be detailed below.)

Your panel is a Murray/Siemens loadcenter. This means that UL, as part of the process to get it listed, tested it with Murray breakers in the panel. However, only two of the breakers (#3/#4 and #15/#16) in your panel were made by Murray/Siemens to begin with. The remaining breakers are of the wrong type to be used in a Murray panel (there's a Square D HOMT at #5/#6, and the rest are Eaton/C-H/Westinghouse/Bryant BR breakers) and thus have not been tested for proper compatibility with a Murray panel.

This is what drives the need for breaker replacements here -- the last installer (or installers, even) whacked in whatever they had on the back of their truck instead of getting the correct breaker for your panel. Note that you are best off shopping at an electrical supply house that stocks Murray/Siemens, or ordering the exact part numbers you need online from a reputable distributor -- the big box stores generally don't have a great selection on these things, which may be part of the reason your panel was invaded by aliens.

Eating this elephant, one bite at a time

Fixing this panel will be a multi-step process, requiring:

The first step, of course, is to turn the main breaker for your condo off. Once you've verified that nothing's live in your panel, then you can tag the hot wires #1 through #16 based on which circuit in the panel they are hooked up to at this point in time -- we'll be using these numbers later when we hook stuff up to the new breakers. Once everything's tagged, you can then unhook all the wires from the old breakers, and pull out all the old breakers -- put the ones for circuits #3/#4 and #15/#16 with the new breakers as we'll be transferring those to different circuits as part of this, and dispose of the rest appropriately.

Once everything is wired up and tightened down, and the temporary number tags removed to avoid later confusion, then we can button the panel up and turn everything on save for the #13/#16 handle (which will be ganged together), as we'll be moving onto that next -- note that the breakers I got for the MWBCs not only have common maintenance shutoffs, but common trip functionality as well, which will be important when we move onto the garage circuit.

Now that the panel's corrected, there's a much less hinky way to get 240V at the garage

Now that we have the breaker panel straightened out as best as possible (ideally, we'd get GFCI and AFCI protection installed, but that requires wholesale replacement of the panel with a much larger one, something beyond the scope of this project), thanks to the MWBC wiring that's already there, we can make it so you have 240V in the garage without the need to screw around with dodgy adapters. You'll need three things besides the breakers for this, and those are a Leviton 5844-I combination 5-20T/6-20T receptacle, a wirenut accepting 3 #12 wires, and a piece of red 12AWG wire to add to the existing pigtails.

At the box that you labeled "Outlet on breaker 13", you'll want to unhook the receptacle from the existing pigtails, and also undo the wirenut that joins the black and red wires together. Use your new wirenut to add one end of the 12AWG red pigtail to the junction of the black and red wires, and then wire the receptacle as follows (feel free to use the screw-and-clamp backwire system on this receptacle, or the side screws instead if you're more comfortable with those):

Last but not least, button up all the receptacles on the garage circuit, and turn the #13/#16 breaker back on.

Now, you have both a standard 120V (NEMA 5-20T) receptacle there, and a 240V (NEMA 6-20T) receptacle that your charger can plug directly into without the need for a dodgy adapter. This works because the breakers I specified above are common trip breakers, which are required when you are mixing 120V and 240V loads on a multi-wire branch circuit as we're doing here because the common trip function disconnects both legs of the circuit on a breaker trip, thus cutting power to the fault and avoiding a scenario where a one-legged trip doesn't do anything useful because the fault's backfed from the other leg via the 240V load.

32
What is a tandem breaker (aka duplex, cheater, twin, double-stuff, etc.)?

1
Should the neutral for a GFCI be separate from other neutrals?
0
60A two pole breaker supplying a sub panel (220v) - how many amps for separate 110v legs?
1
Does this electrical panel meet code?
0
Can I install Whole Home Surge Protector into two single pole breakers?
1
Twin breaker allowance
2
How do I intall GFCI breaker if wire for outlets is 12/3 using two breakers?
4
Does the arrangement of breakers within a panel matter or follow any rules?
3
Would like to add a 14-30 outlet in my garage
4
Can I swap a quad breaker for two double pole breakers?