Is there a way to remove a root from under a walkway to bring it back to level without getting the walkway redone?

I had a disaster of a huge river birch tree in front of my house when I purchased it a year ago. I had it removed about five months ago, and the roots that ran through the yard were ground out along with the stumps. The roots lying underneath the walkway were not removed at the tree removal contractor said they could not go under the walkway, which was obvious by the massive machine they used for the stump grinding and root chasing.

I had a mudjacking contractor take a look, and he told me that doing that $1,000 job would leave the walkway peaked because the root would still be underneath. I then submitted a request through Thumbtack asking if someone could lift the segment and remove the root and then put it back. I had seen Youtube videos of this being done, but it does not seem to be standard practice. The guy told me "sure" and then took a look and said the segments had to be removed and the concrete repoured for $2,500.

Is there a way to remove large roots from underneath an exposed aggregate sidewalk without turning it into a huge project? I don't know what kind of contractor would do this. Maybe concrete contractors are not the right place to go. I want it to be ground/chopped/destroyed. The complicating factor is that unlike regular stump removals that include the roots, this large root system is under a walkway. 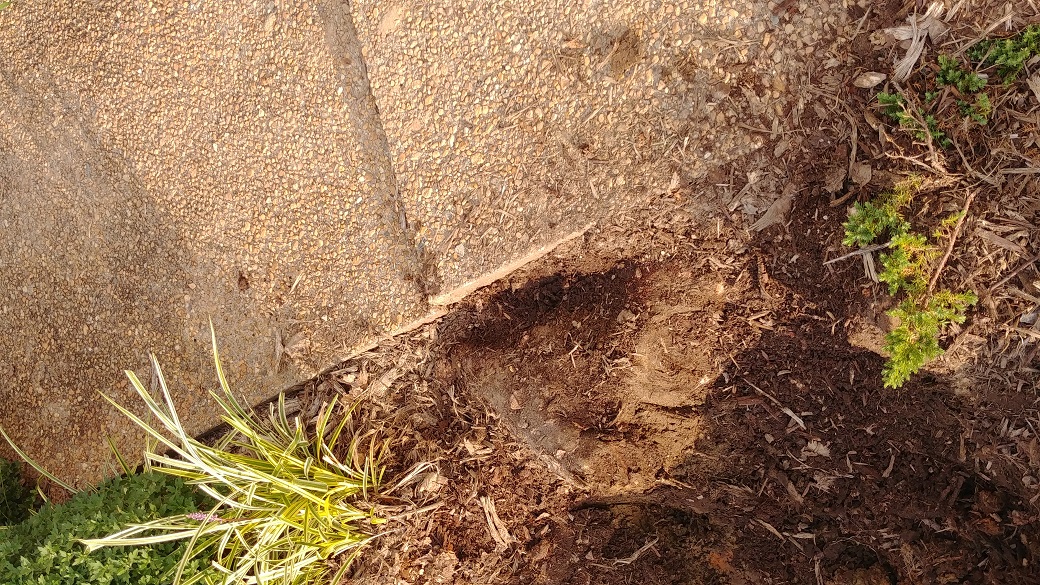 Saturating wood with saltpeter produces an oxidizer, allowing it to burn while buried. In ancient days gone by you would drill a hole in the stump, fill it with saltpeter from the corner drug store, then light it after a couple days. The stump and roots would all burn. In these more enlightened times you're probably violating some civil ordinance by doing it.

If safety is the only priority you can cut out a section of the walkway directly above the root with a wet saw. (Either rented or a contractor) With the pavement lifted out of the way you can dig out the root with hand tools then pack the void with an appropriate base. If you've lived a virtuous life the original section will have remained intact, otherwise you'll need to repour the small section. This will leave a visible repair, but you can definitely do it below $2,500.

FYI, if you look in the Yellow Pages you should be able to find a masonry supply yard nearby. There's an excellent chance that they'll carry the aggregate used on your walkway.

I'd dig a hole near the center edge of the uplifted slab; 1X1X1 foot should do. Recess the hole under the slab, so there's room for your car or truck jack. Put a a 2"X6"X8" or so piece of wood on top of the jack, and lift away. If the slabs are separate, you should have enough mechanical advantage to lift the slab cleanly. If not, you'll need a dry masonry saw to detach the slab from the rest of the concrete. When the jack is at max extension, put chocks under the ends of your slab, reposition jack and repeat. Eventually you'll get enough clearance to get at the root. Take it out or burn it. Fill the hole, and carefully lower the slab. If the slab cracks on you, just whack it into lift-able bits with an 8 pound sledge. Repouring 4" sidewalk slab is easy. Cement and gravel are dirt cheap, and it's much cheaper to do it yourself. Don't forget to get the pebbly stuff, or whatever it is, to match the other slabs.

Not sure where you live, but it's getting pretty cold to pour concrete around here. It might be best to postpone the project til spring.

Not the answer you're looking for? Browse other questions tagged concrete removal leveling walkway or ask your own question.