Is there a way to fish a cable (network) using an existing one as a guide?

Are there any devices that allow you to basically clip a wire to an existing wire in a wall and use it as a guide? I had my house wired for networking, but that was before I upgraded to gigabit fiber. I want to run the CAT6 cable from the fiber box up into my garage ceiling over to my network rack across the garage, but not sure how to do it. I've got access to the holes the installer used to run the cable the first time, and I can easily get from the modem to the existing wires, but I don't want to have to re-pull cable from my upstairs just to pull this cable through. I thought about trying to use an existing wire as a guide, and fish new cable through, but only way i could think of that is to use maybea paperclip or something to attach to an existing wire, then use fiberglass rods to push the new cable along the path of the old one.

Is there an easier way to do this without using one wire to pull new wire through?

Edit: Maybe I wasn't clear enough. I don't have pictures at the moment, but I'm not trying to run new cable to existing outlets, I'm trying to using an existing cable (lets not call it ethernet, lets say it's a power cable or telelphone or coax or something to make it easier) as a guide for a different cable.

I have a 3 story house (garage, 1st, 2nd). In one corner of my garage is a small 6U cabinet with router, core house switch, UPS. In the other corner of my garage near my utility panel is my Fiber gateway from ATT. Currently I have a cable strung along the ceiling running from the gateway to the 6U rack. I want to run this up through the garage ceiling and back down... but it's about 20FT away, through insulation. In the middle of my garage, i have a small access hole my network installer used to help run the CAT6 cable from 1st and 2nd floors to the garage. From this hole I can easily go about 8FT to where the gateway is, and another 18-20 ft to where the 6U rack is. I basically want to thread new cable up into the ceiling from the modem, pull it over to where the bundle of other cables from 1st and 2nd floor come, and then join it to where the rack is. I thought about undoing one of the 1st floor cables and using that, but that would mean pulling/terminating new cable to the first floor, just to act as a guide in the garage ceiling. I was hoping for a tool or something to basically hook in at the ceiling hole, and then "push" along an existing wire to run the new garage line.

If pulling existing cable is the only viable option, I guess that's what it'll have to be, just trying not to yank anything existing out if I don't have to.

A real (and "reel") fish tape is often the tool to use. Because it is flexible and very long (typically 25' or 50'), you can get a lot farther than just fiberglass rods. But it can be a pain to use, depending on the path.

When you have (as I think you do) an existing cable that you want to keep and want to run a new cable in the same path:

If you think you will ever need to do this again - e.g., another parallel cable or a future upgrade - then instead of using one cable to pull another, use pull string:

I just strip a few inches of the outer jacket off then twist the ends together then a couple wraps of tape and pull through most com cables are not stapled but if they are a fiberglass rod is the easiest way to go from an attic or crawl space down through the wall, I use glow rods as the glow and are easier to see in the dark cavity, trying to run fish tape is fine for conduit but in a wall the tend to coil up that's why I use fiberglass rods.

Why not just use a female-to-female RJ45 connector to join the old cable to the new cable, and pull the new cable through? 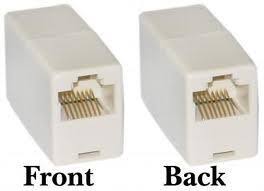 Not the answer you're looking for? Browse other questions tagged data-wiring ethernet or ask your own question.