In our house we have a disused 50amp supply in the basement, which used to supply a hotbtub, feeding through a seperate in house double pole circuit breaker, with confirmed red, black, white and earth wires in a 3/4" cable, for which I have three questions.

Ideally I would like to run both the 240V shower and 115v dog grooming room from the same supply, not simultaneously, complying with USA electrical code. Thank you in anticipation of any replies.

Ed Beal nailed it: it needs to be a subpanel. That will serve you so ridiculously well that you'll be back here saying "enough already!"

First, tear out that 30A Breaker! Common plug-in circuits are only wired for 15A or sometimes 20A (if they have the larger 12 AWG wire) and you're tripping a 30. This is how you burn down houses. Replace that breaker with a 15A And Stop Overloading It. This is the work of the last guy, a fool who upsized the breaker because he was sick of it tripping and just kept upsizing breakers until it stopped tripping. He couldn't be bothered learning how not to trip breakers.

Now let's talk about what options you have for that 50A circuit (assuming it is a 50A circuit -- is the wire really 6 AWG? Or did the same fool put a 50A breaker on 8 AWG? (if so it must be a 40A breaker, but that won't affect anything that follows.)

This pump may not enjoy American 60Hz. However you hook up the two hot wires (black/red) to hot and neutral on the pump. Doesn't matter which. White is unused, cap it don't cut it. Bare/green ground goes to earth on the pump. In your main panel, change this circuit's 50A supply breaker to a 20A 2-pole GFCI breaker. Yes I know how much those cost.

This scenario lets you run 2 dog dryers, or 1 dog dryer and 1 AC. You cannot power the pump.

In the main panel, change this circuit's 50A supply breaker to 20A 2-pole. It doesn't need to be a GFCI breaker, but if it is, you won't need GFCI receptacles.

This powers both dog dryers, the A/C and the pump at the same time. And actually has a full circuit's worth of power to spare. And it will be a safer installation, as things associated with "wet" will have GFCI protection.

Get yourself a modest sized panel such as a Siemens 12-space main-lug panel. Don't go smaller than 12, you'll hate it later. So this is what it looks like. Neutrals and grounds omitted for simplicity. 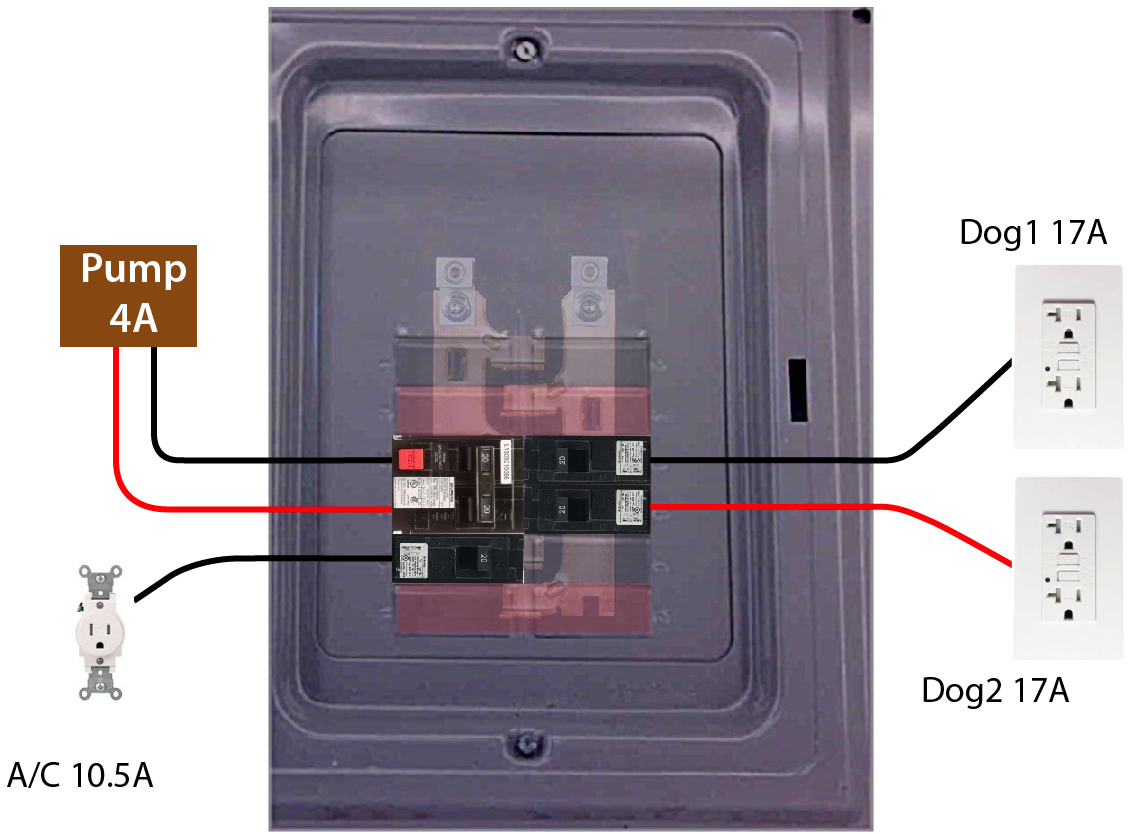 Now let's take a look at what's happening here. You notice the odd bus routing in there? That's because the panel has two poles and the buses are arranged so adjacent breakers are on opposite poles. I also took the liberty to use black for wires on pole L1 and red for pole L2.

Everything but the A/C needs GFCI protection. For the pump there's no choice but a pricey 2-pole 20A GFCI breaker. (15A would also be acceptable, it's just such an odd duck that I hate to spend $80 on one.)

For the dog dryers, I used 20A plain breakers the cheaper GFCI receptacles, note they are the 20A variety. A 17A device needs to use the funny plugs with sideways neutrals. Since the dryer maxes out the circuit, I would have preferred to use 1-socket receptacles (like for the A/C) - but those are not available in GFCI @ 20A. Don't plug any other big load into these dryer circuits! Cell phone chargers and LED lamps are fine.

Now let's tally up the amps on each pole. For continuous loads, we must derate by 125% - so your 10.8A air conditioner becomes 13.5A derated.

It would be bad if both dog dryers wound up on the same pole with the air conditioner, so that's why I put their breakers adjacent. In fact, just tape them together. No need for a handle-tie.

Let's assume further that the last guy was a fool and used 8 AWG cable on his 50A circuit. 8 AWG cable is actually rated for 40A, and in that case the breaker in the main panel should be changed to 40A. Even then, we are in good shape.

We could definitely support one more 20A circuit on the L2 pole. And here's an idea: the circuit that comes into this room that is constantly overloaded: cut it in two at some middle point. Feed half from the main panel and half from this panel. It would really matter where you cut it, so you would have to do a careful load survey of the sequence of the outlets and where the heavy loads are.

If the service is honest-to-goodness 6AWG 50A, then you could even support 2 more general circuits in addition - though not at max load of course. It's OK to oversubscribe panels a fair bit; you just can't do that with known loads.

It's not likely going to work well on something that has a pump. There is a law of physics, called the "Affinity Law", which states that the power required by a centrifugal load, such as a pump, varies at the CUBE of the speed change. Your pump was designed to operate at 50Hz, the US supply is 60Hz, so the pump will run 20% faster. That means the POWER (kW) required by the pump will increase by a factor of 120% to the third power (1.2 x 1.2 x 1.2), so will need 173% of what the pump was designed for. The motor however will only produce 120% of the rated kW and it will overload (if you are lucky, or burn up if not). There is no realistic/cost effective way of changing the frequency for something like this. Bottom line, you needed to have checked into this BEFORE bringing it over.

How many circuits serve the room right now? What are the sizes of the wires and their breakers?

Not the answer you're looking for? Browse other questions tagged 240v uk usa or ask your own question.