Diagonal brace left in the basement by builder. Can I remove it? Replace it?

I have a diagonal brace running across an interior wall in the basement, and it even goes partially into the floor concrete. Is this meant to be permanent, or was it supposed to be removed during construction?

I want to finish the basement and put drywall there, but this obviously gets in the way. What are my options for dealing with it? 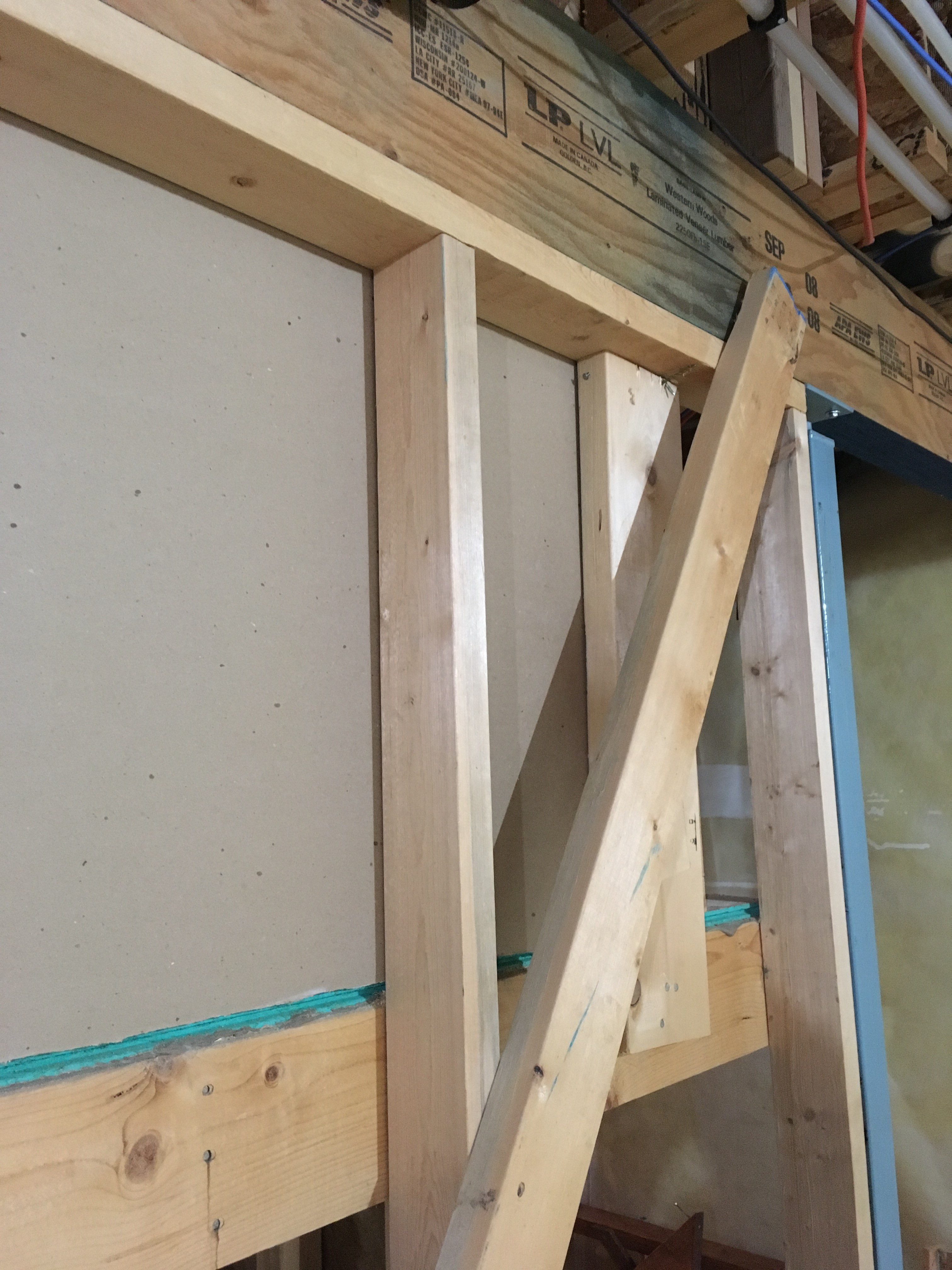 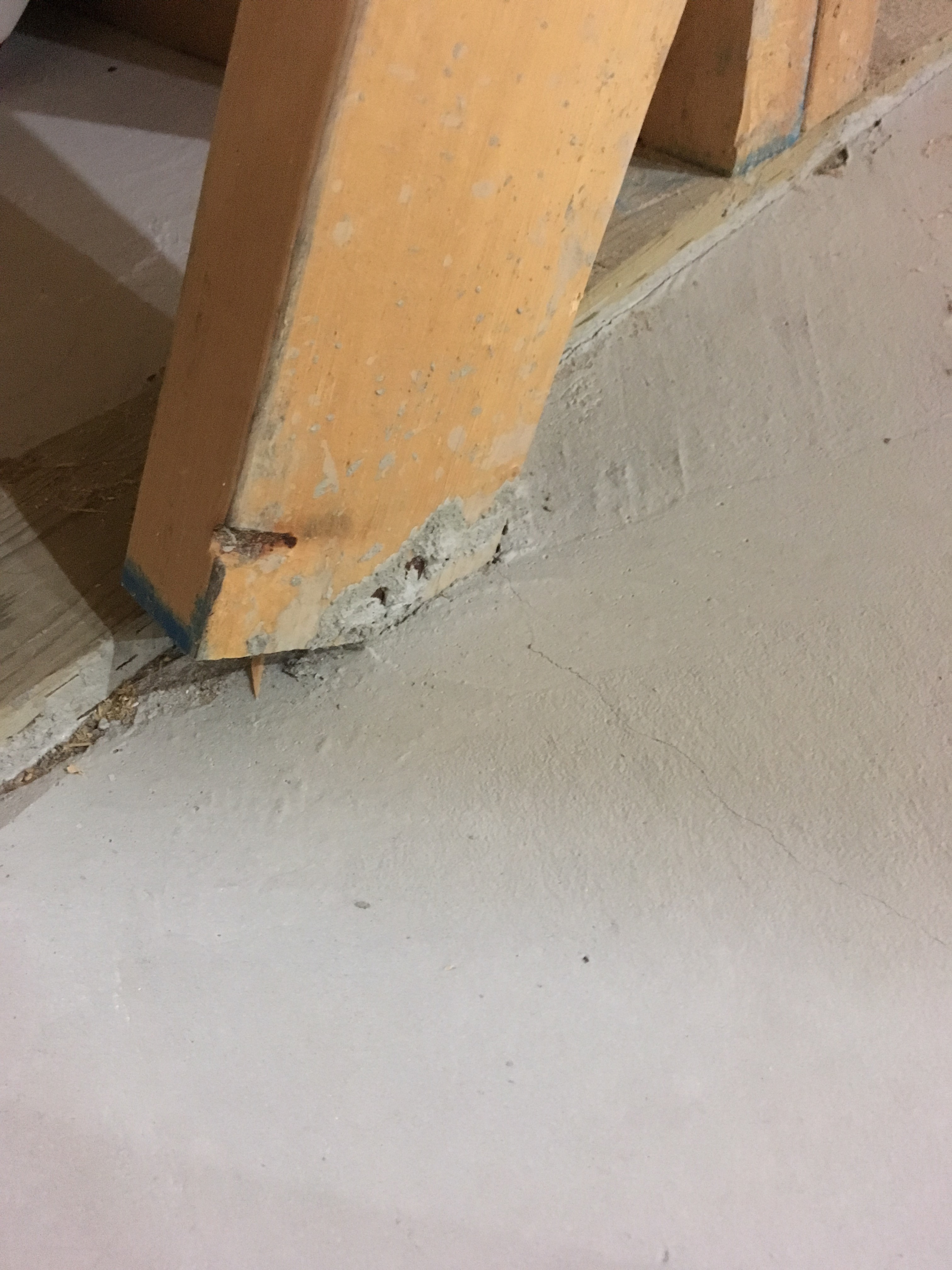 Nail locations. 3 nails into the beam at the top, 2 elsewhere: 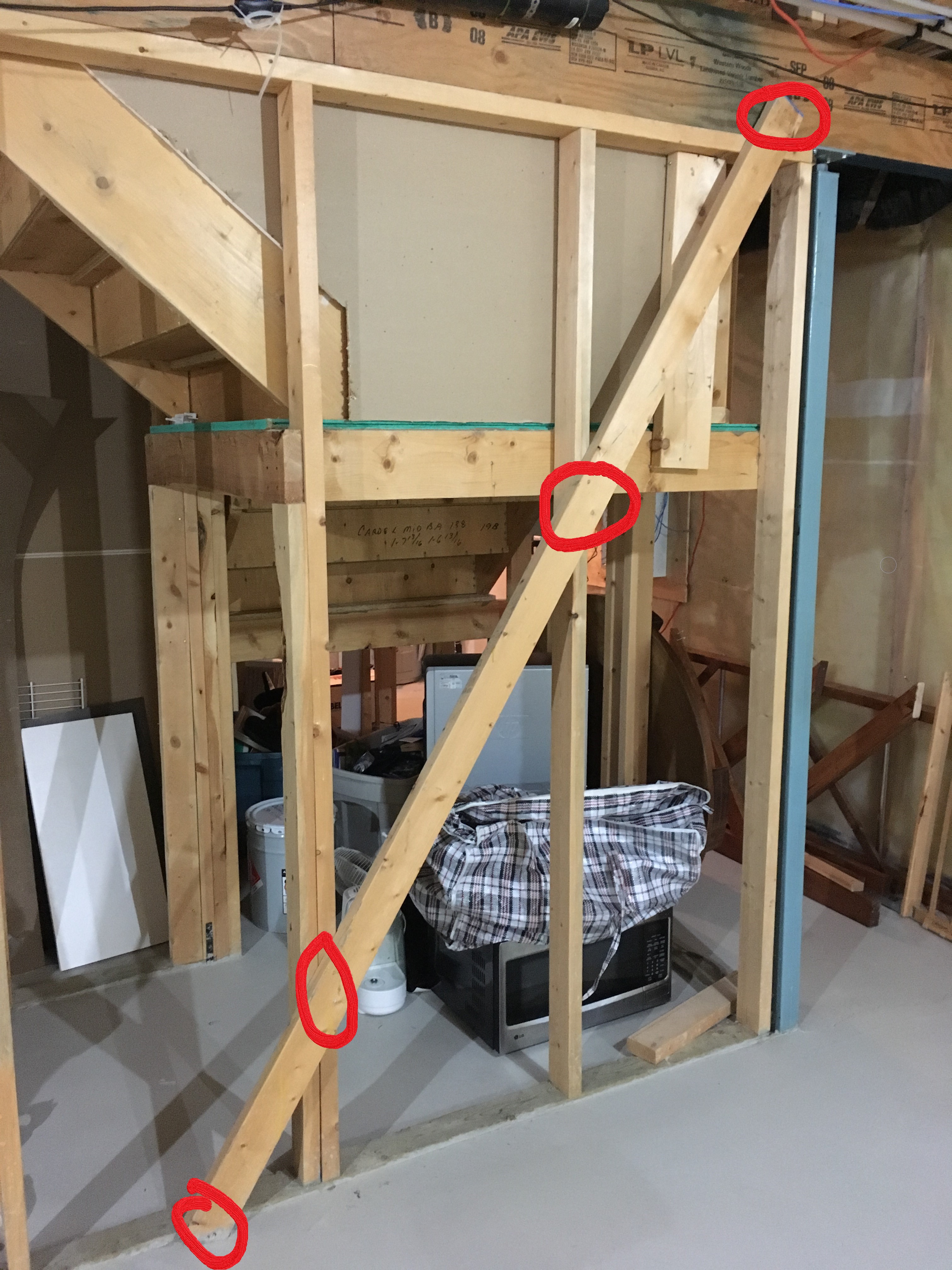 That wall is load bearing; it is helping to support the stairs and that landing.

As such, it can be subjected to significant load (think two 250 lb guys, plus heavy furniture, for starters).

More importantly, it is subject to lateral impulses from people and things going up and down the stairs so it should have lateral/diagonal bracing to help stop "rhombusing".

Such bracing will give the stairs a solider feel and also reduce cracking/popping in the sheetrock.

There are a variety of metal bracing products you can use, but it would probably be sufficient, in this case, to nail 5/8's plywood to the backside of those studs (in addition to the sheetrock on the front side.

I'd also use some steel L-straps on the other 2 landing supports (if there's not already something there).

Yes, you can remove the brace because:

It is/was a temporary brace, it is safe to remove it.

During the fabrication of the wall, or before the floor system was added overhead the brace was added to stabilize that small wall section, perhaps before the beam was added. The beam in the picture, typically goes from foundation wall to foundation wall, although there can be many exceptions. Still, this hold true... the floor system is now in, that in itself is a huge brace with al the plywood set to the joists that are tied to the beam. Even if the beam that is over the wall in question was not tied into either wall, the floor alone would not allow the beam to move, and therefore the wall in question to rack.

If there is a concern for this non-bearing wall to move or shift or whatever.... and it is a non bearing wall because of the beam over it and a steel post beside the wall to support the beam..., albeit short, the diagonal of the stair carriage WILL hold the center of the studs sable if the carpenter who set the stairs did his job and fastened them to the framing the way he should. The landing does the rest.

As a mention, the concrete floor has a leveling layer of concrete over it. Not only the end of the diagonal in in the floor, the plate it is nailed to is in the floor as well, by about 3/4".

Not the answer you're looking for? Browse other questions tagged basement framing structural or ask your own question.

0
How can I remove a musty smell from the basement?
4
What is the proper order in framing the basement walls?
1
What was the purpose of this diagonal 2x2 along wall?
4
Basement shower tiled floor not sealed by builder what now
1
Diagonal Cut-in Brace Removal?
2
when better replace carpet in the basement
1
basement framing with metal Studs Best way to fasten them to the floor
0
Removing diagonal truss brace?
0
Framing basement bathroom: original builder didn't account for wall wrap when laying bathroom drains?