How are tandem breakers used in multi-branch circuits?

I'm in the process of replacing my breaker panel. I was talking to my neighbor and she said that her panel was changed when she did some remodeling. I was interested to see what was installed in her condo because we have a limited width (11in) space for the panel. Here is a picture of her panel (the one with the 30A breaker) and mine (the one with the 40A breaker). It looks like all of her breakers (except for the 30A) are tandem (Type MH-T on the labels). The installation was done by a certified electrician and inspected/approved by the city. I have two multi-branch circuits in my condo. You can see breakers 4 and 5 linked with a piece of metal. Breakers 2 and 3 are also multi-branch but the metal link is missing. Her condo is like mine so she should also have two multi-branch circuits. So ... how did the electrician do that with the tandem breakers? I'm trying to fill the missing info I have in my knowledge because my ignorance says what the electrician did is wrong.

BTW it also looks like the A/C breaker was downgraded from 40A to 30A. I measured the current in the A/C in my unit and the running current is 18A so I thought I could do that but I was discouraged from doing that (in another post here) because of high current at start up, which made sense.

I could think of a weird way of using tandem by connecting one to one pole and another to another pole and butting them together and connecting them with a metal rod but ...now that would be streching the rules, wouldn't it? and something I wouldn't do myself but would it be legal? Anyway I don't see any metal rods connecting her breakers. 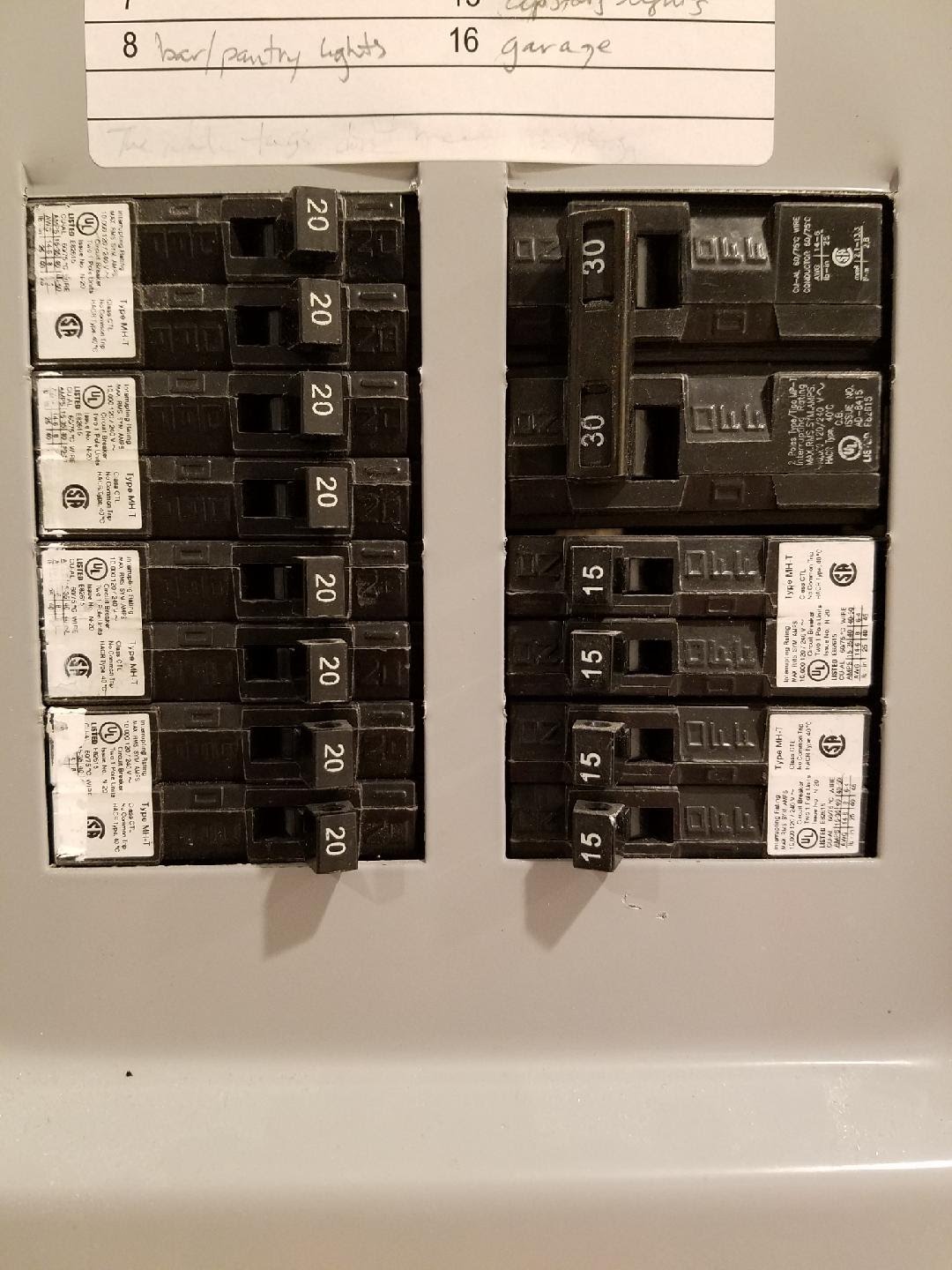 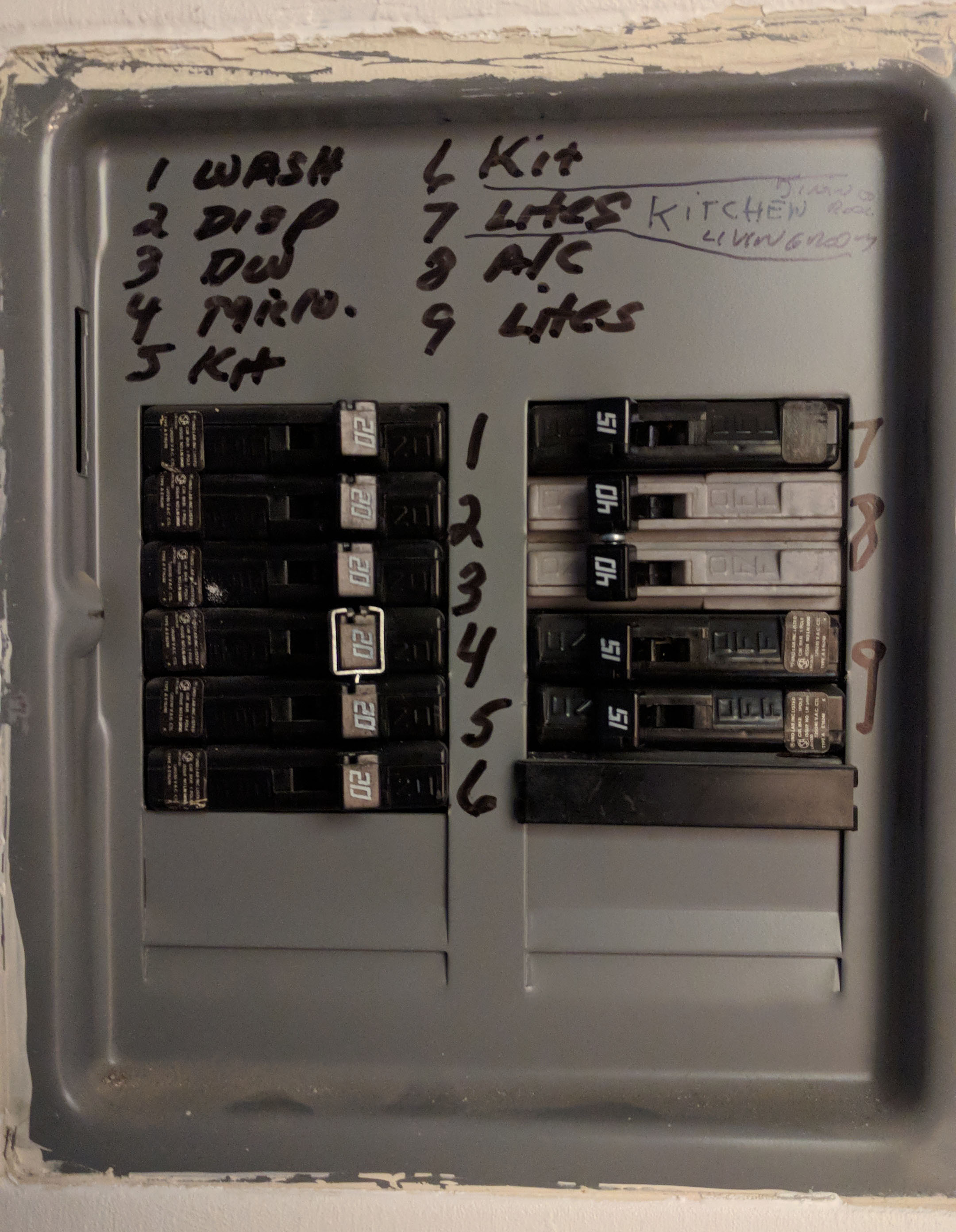 How do MWBCs and tandems go together? THEY DON'T.

If you want to do that same thing, your best bet is to put both pairs of your MWBCs onto a 2-pole/2-pole quadplex. That's what he should have done.

Making your own handle tie is out of the question. Listed handle ties arent available for duplex breakers, but they don't need to be, since quadplex breakers are readily available.

Something is odd on your panel. From a positional standpoint, you could have what's called a "quad" breaker installed in positions 7 through 9. A Quad is a factory made unit consisting of two side by side tandems, used as two separate 2-pole breakers, one on the inside pair, in your case the 40A, and the other being the outside pair, in your case the two separated 15A breakers on either side of the 40s. The outside pair is often linked with a "clip" to make them "common-trip" meaning if one side trips, it opens both poles. 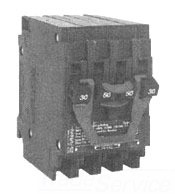 Sometimes those two outer breaker poles are NOT connected together and simply function as two separate circuit breakers. That is what appears to be the case here.

The odd thing in this panel is as follows:

In a quad breaker, generally the two sets of twins are the same. In yours, the center pair (40s) are a different color. That can only mean that someone used an off-brand replacement for an older version of Murray breakers called a "Type A" thin breaker from a time when Murray was owned by another company called Crouse-Hinds. That entire division was bought by Siemens some 3 decades ago and because of problems with that Type A product line, Siemens discontinued them, and more importantly here, discontinued listing them for use in their load centers. Another company called Challenger had owned a similar product line and re-released them under their own name, calling them Type A thin breakers again and they had their own versions of load centers that were listed to use them as well. Challenger was then subsequently bought out by Eaton, who again dumped that product line and it was eventually picked up by another company called T&B, who still sell it, along with another aftermarket breaker company called Connecticut Electric, who sell their retrofit breakers on eBay and Amazon.

The thing is however that just because the breakers PHYSICALLY fit in the Murray panel and clip to the bus bars doesn't mean you can use them. They are NOT listed under the UL file of the Murray panels as an acceptable breaker for use in them. Often that may not matter because the BREAKER manufacturer will test and list their BREAKER (called "certified") in a competitor's panel and many (if not most) breaker manufacturers do this to each other. But in this case, I cannot find any documentation that any versions of the "Type A" thin breakers are listed in anything other than T&B panels for which they were designed.

but here's the flip side of that coin. The inspector may not have known that, or cared, but if it passed, it passed. An AHJ (Authority Having Jurisdiction) is the final arbiter of a situation like this. He/She can decide they are satisfied with the installation and accept it.