I am a happy owner of a 13'L x 18'W motorized canvas awning over the rear deck. However, after 6 to 8 yrs of continuous use under the sometimes inclement weather, when it was not retracted (unfortunately), acting as a sail it had lifted up and crashed down with a great deal of strain on the header bolts to the rear of the 2 story house. The mounting height is well above the main floor ceiling so it is not bolted to the 2nd-floor joists. I am unsure how the header is lag bolted into the house as it is covered with an aluminium siding over the 2x8" and the house also has similar siding.

The issue is the long-term leverage of the canopy to the main header brackets have (4) bolts to the wall thru the header have pulled away somewhat.

Effectively the 2x8" header is tilted by more than 20 degrees with about 1.3" gap at the top away from the wall. I would prefer 10-degree tilt but cannot adjust it any further.

All the details that I know may be relevant are in the photo, which I hope is clear, if it is zoomed in.

It is usable now, but the edge of the canopy is just below my height of 6" and there is 2" wide bolt with a big ring head for cranking the awning with an extension rod to a higher canopy elevation angle. That is as tight as it will go or as much as I would like to try.

I would like to raise that 6~12" which is equivalent to pulling the header into the wall by 1/4" probably with some > 1-ton force thru the headers to the 2nd-floor wall frame. There is no evidence of wall damage.

So my question is this. What fasteners will accomplish this?

I was guessing at least a dozen 7/16 to 1/2" lag bolts x 6" assuming I can locate the exact centre of the 2nd-floor outer wall frame studs which have horizontal oxidized sheet-metal finish. ( not good for a stud finder)

The hand sketch of the canopy or awning is actually tilted worse than shown ( not to scale) by about 6~12" drop at the lower end leaving a 1.3 gap at the top of the header from the wall. This gives the brackets some strain relief but the elevation angle mechanism can no longer be raised any higher." 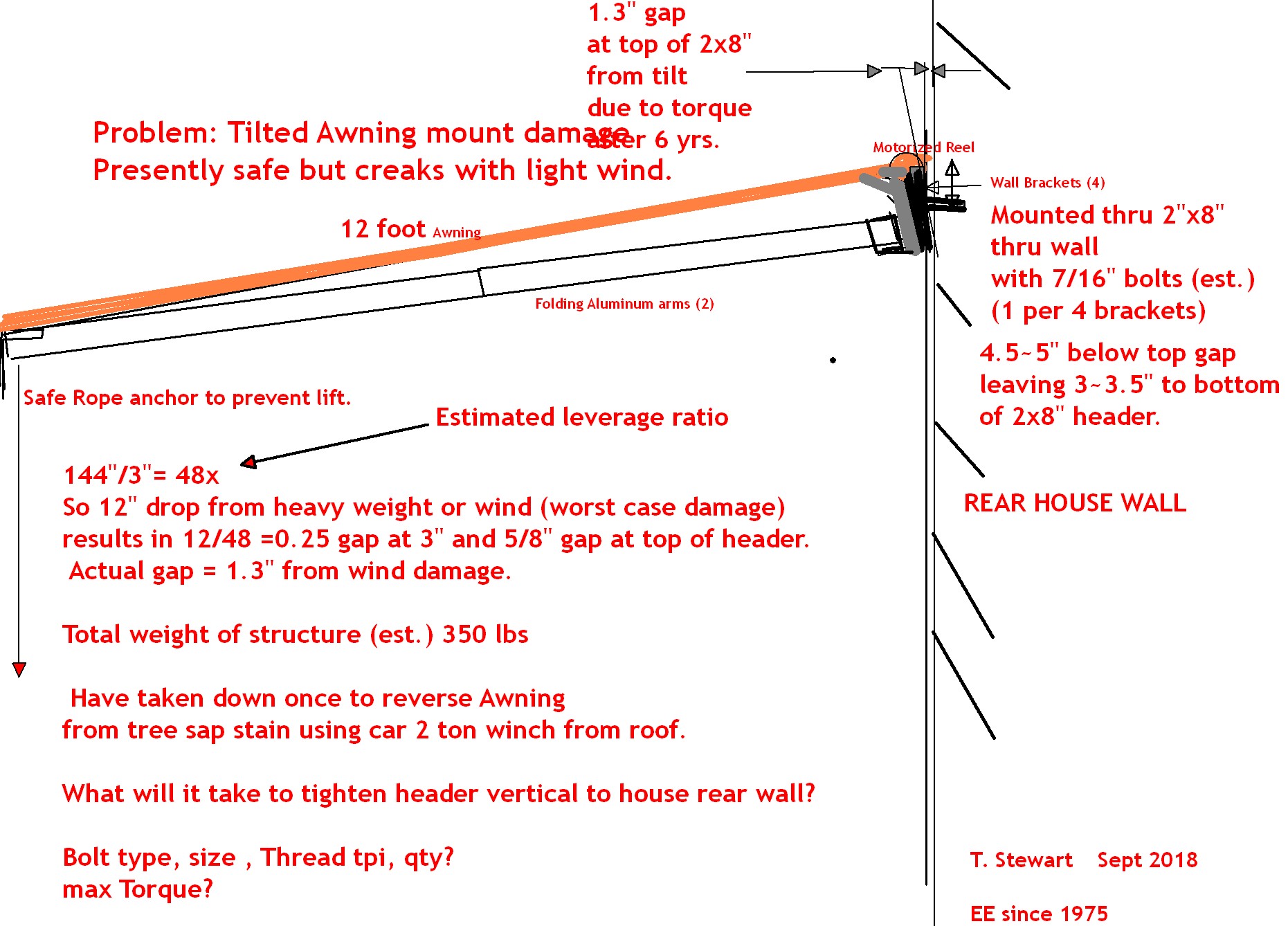 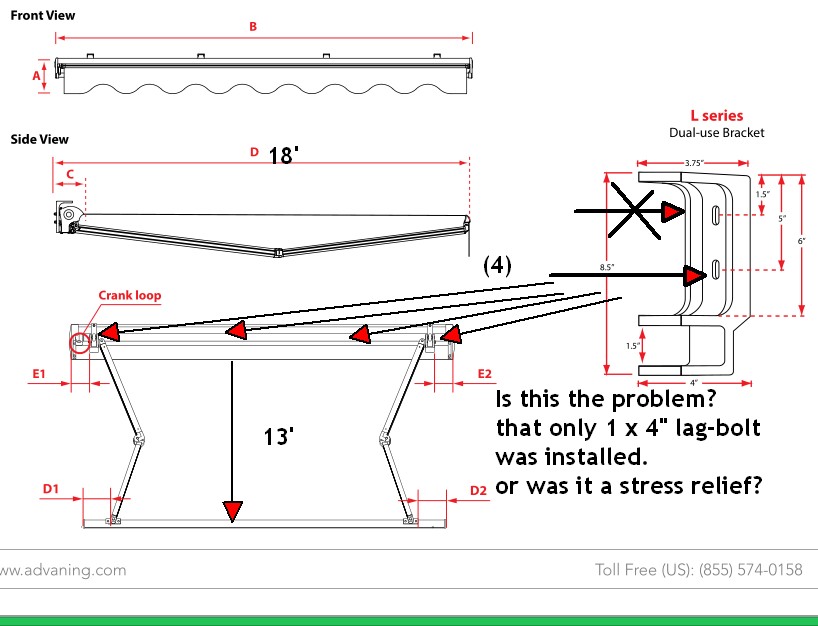 After finding the bracket dimensions, the single lag-bolt position 5" down was correct but the bracket bottom edge is only 1" down from that bottom bolt hole which makes the cantilever ratio 12':1" or 144:1 stress amplification from awning outside edge to the bolt relative to the bottom edge.

That's a huge ratio and seems to be a previous installer fault.

Browse other questions tagged walls exterior mounting or ask your own question.

5
How can I attach pony wall to surface of platform and will it be strong enough against lateral forces?
1
How should this vintage wall-mount sink be mounted? Does not fit standard cast iron brackets
0
Is it possible to hang a bicycle from floating shelf bolts?
2
Problem mounting TV wall mount / possible cracked stud
0
Supporting a bookshelf aquarium
1
Unsure how to hang awning on garage, nor what bolts to use
0
Reason for no header spanning this load bearing wall?
2
Lag bolt vs structural screw (and length) for TV mount
0
Mounting long pipe as curtain rod from ceiling between exposed beams. What are these hex bolt sleeves used for existing pipes / better alternative?
0
How to mount TV on brick