Can I connect a Lutron Caseta switch to a half hot outlet?

I recently installed a Lutron Caseta (PD-6ans) switch that connects to a half-hot outlet. I noticed there is still a trickle of electricity coming out of the switch even when it's off. Enough to make a non-dimmable LED bulb flash in the lamp plugged into it. I switched to a dimmable LED bulb and that fixed the flash problem, but there's still a trickle going to the half hot side of the outlet when the switch is off. Is that a big no-no? How can I fix it? Or am I worrying about nothing?

Thanks for the help!!

Edit: Here's the entire wiring of everything in question. There were two three-way mechanical switches that controlled two half hot outlets (used for lamps). I replaced one of the mechanical switches with a PD 6ans and wired the other mechanical switch according to how Lutron says to do it. Everything works how I want it to, but still have some current flowing when it should be off.

@MattEvansKC - did you follow the instructions on page 7 of this document? 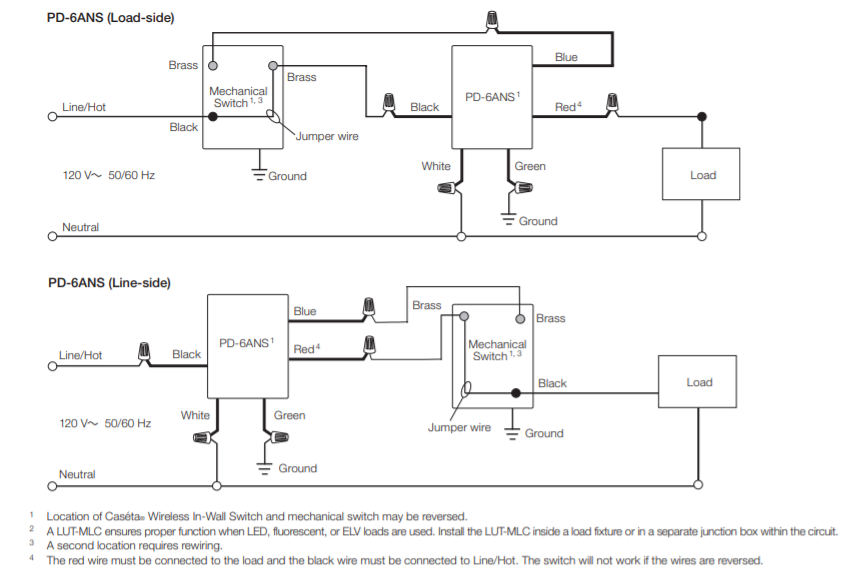 You do need to identify whether the three way you are replacing is on the line side or the load side.

Not the answer you're looking for? Browse other questions tagged electrical wiring lighting switch receptacle or ask your own question.

1
Switched (half hot) outlet
4
How can I wire 3 Lutron Caseta dimmer switches in bathroom?
1
How to make outlet half-hot in this situation?
1
Having trouble with a half hot switch
1
Replace 3-way toggle with Lutron Caseta Smart Toggle
0
Wiring switch outlet to be half hot
0
Installed Lutron Caseta, one bulb works, but two do not
1
Lutron Caseta smart dimmer with Pico remote in 4-way switch set up