Gas line addition to external building - can I avoid expanding all existing lines?

I'm adding an external building with hydronic heating and a variable boiler (160k BTU max) which will be about a 100' feet from the existing gas meter.

I had planned to simply tap into the existing gas line (which was oversized originally), but when calculating the additional length/gas needs, it appears that I will need to re-plumb some of the existing lines to accommodate this new longest branch run. Yikes ... not cool. I really don't want to pull apart walls to change existing gas lines.

Can anyone suggest options? I suppose one of them could include a new, separate gas meter for this distinct building or ? 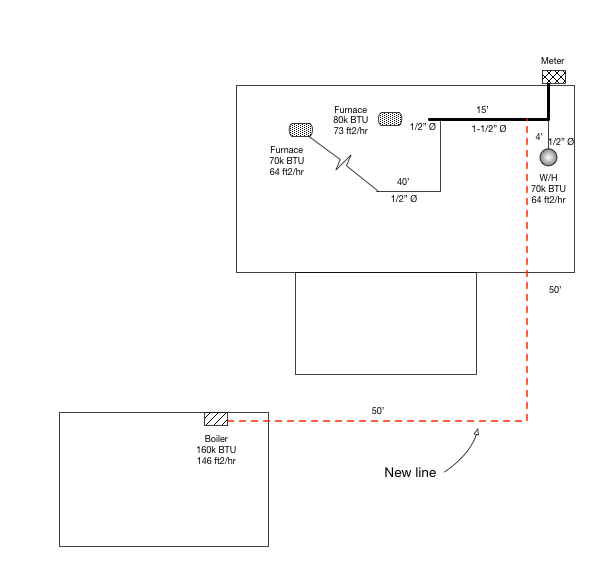 N.B. Running a T from the meter and routing around the building isn't a possibility due to a number of constraints, including concrete hardscape.

Browse other questions tagged gas boiler natural-gas or ask your own question.

15
How can I tell if these pipes are gas lines or water lines?
3
How can I prepare this natural gas line so I can connect a grill?
4
Can I tap into this main gas line for my natural gas grill?
1
Level of demo required for extending existing gas lines?
5
Best way to vent gas from gas lines in preparation for opening gas line
2
What can I do with a buried copper gas line?
2
Natural gas line sizing with generator addition
10
How can this pool heater gas line be disconnected?
1
Can dryer ducting be placed near gas line?