A guest pushed in my shower wall tile. How can I fix it?

Some guests stayed over at our house a couple days ago and one accidentally leaned a little on the shower wall. Leaving behind a gap between what seems to be the drywall or backing and the actual tile!

Now we’re not up to the idea of spend hundreds on tearing it down and replacing it. So is replacing it necessary or can we just fill in the cracks with grout filler or cement? Is this an option. 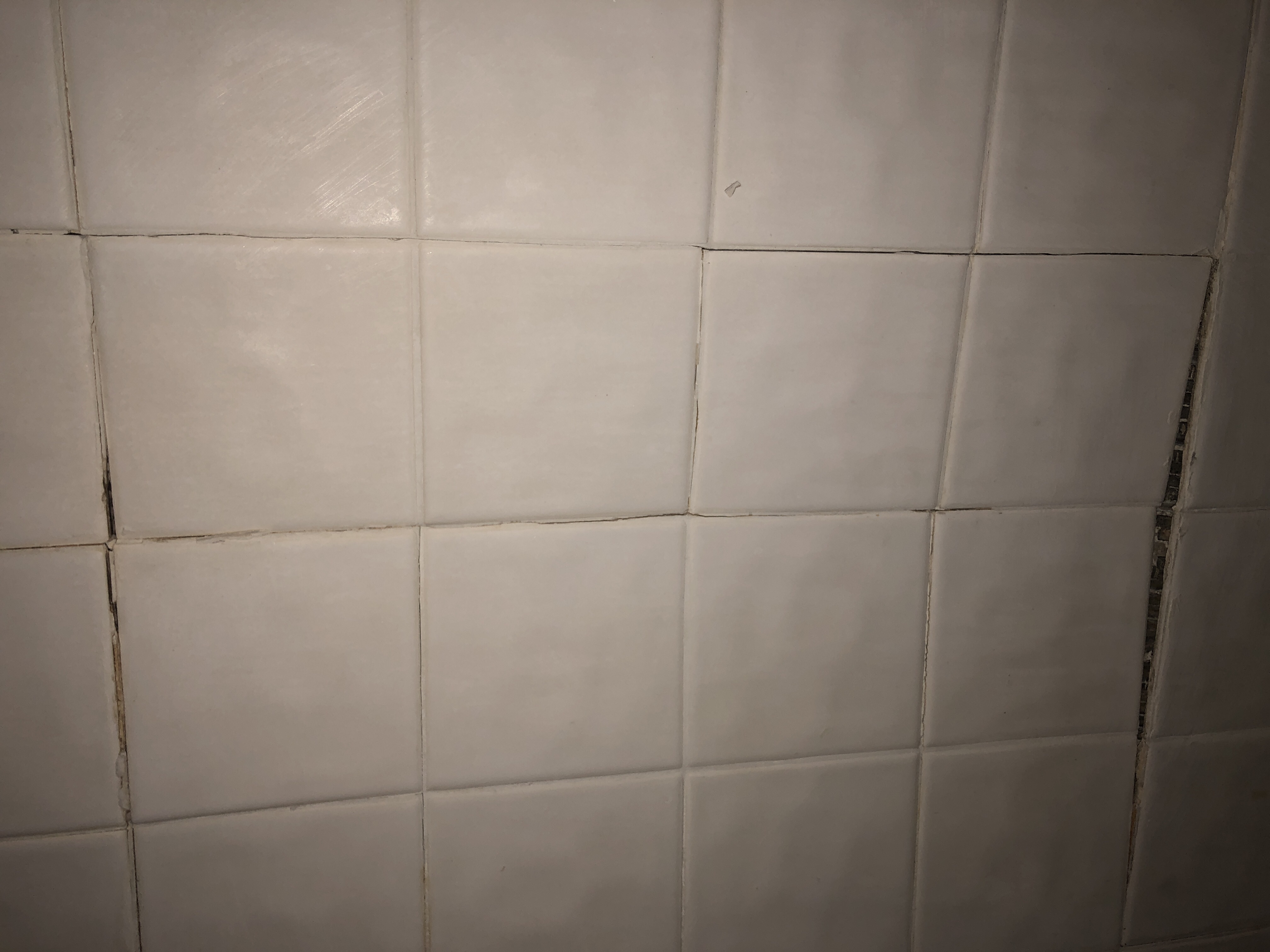 So you have two options here

Unless the person was huge and really slammed into the wall, this damage is evidence of a seriously substandard shower wall. In any case it needs to be demoed and redone.

If the tub or shower bottom is placed so that the wall must be single layer (green wallboard or cement board), it might be a good idea to put blocking between the studs. Maybe 2x4 blocking at shoulder height and 2x8 blocking centered at 36" above the floor for future installation of grab bars. A 42" long bar horizontal on the long wall is useful even for young and mobile users, and a 24" long bar horizontal on the end wall helps with ingress and egress of a tub shower.

EDIT I have seen one shower redo in which the original backer was 1/2" standard drywall, but the redo under the new tile was a single layer of cement backer board of thickness slightly less than 1/2". In this job the tile used in the shower walls was left over porcelain floor tiles 18" x 18" so much stronger than standard bath wall tiles. (It was certainly a pain to drill through.)

The original drywall was removed up to where the tile stopped and shim stock was placed on the edges of the studs so that the outer surface of the new backer lined up with the 1/2" drywall above it. But the blocking for grab bars was put in before the shims and was lined up with the studs. I don't remember if shim stock was placed on the blocking so, between the studs, there was, or could have been, a slight gap between the backer and the blocking.

Some years later I installed grab bars with screws into the blocking and had to be careful not to screw in too tight. I later realized I could have squirted silicone caulk onto the holes in the tile to overflow into the air gap and so provided support for the grab bars.

Since the base buckled it probably is sheetrock. Many homes with tile have inferior backing like sheetrock, if not regularly sealed moisture gets to it and it starts to fall apart. Could you repair it? In my opinion repairs on this will only last a short time at best as the base is already comprised. The cost of installing a new backer and tile can be done for much less than 1k and less than 500 depending on the type of tile as a DIY project. At a minimum if trying to repair the damaged backer needs to be removed to the stud on each side of the damaged area. Install a new backer and clean and reuse the tiles. I have also seen new tiles used as accent strips at top and bottom of tiled areas when this happened to do it on the cheap but still flip the home quickly. Being in the middle of the wall it will be tough to match but can be repaired, however I would recommend a complete replacement and you won't be going back in in a year or 2 patching another area.

Not the answer you're looking for? Browse other questions tagged shower tile or ask your own question.

4
How to tile over shower wall surround flange?
1
Questions about shower wall tile install
1
What to do with pushed in tile?
2
How do I fix squishy tiles in shower floor?
2
Moen faucet cartridges repeatedly fail with torn seals
8
Water seeping from grout in tile shower
0
Simple shower tile replacement