I am in the process of installing a pre-finished hardwood floor. As part of the install, I purchased a bunch of stair nosing with the intent of installing the hardwood on my stairs as well. However, I have come to realize that my initial plan will end up shortening the treads of my stairs by about 5/8". Since my treads are currently 10" deep, the minimum allowed by code, I cannot afford to lose this 5/8".

I'll start with a diagram of the profile of my stairs and an explanation of my original plan. Here's the profile: 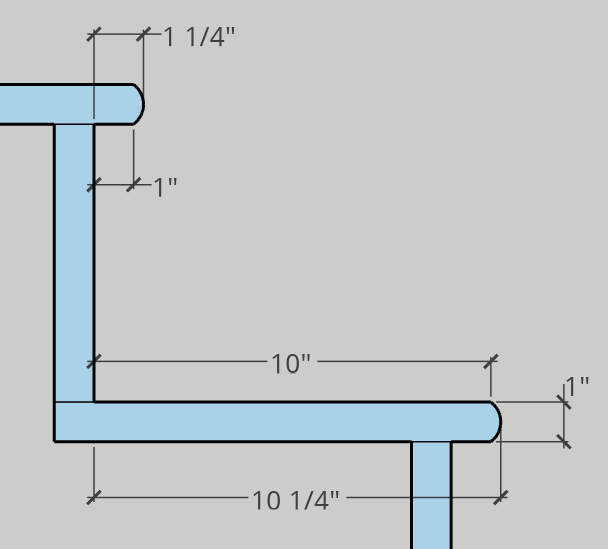 The treads and risers were previously carpeted, and appear to be MDF or something similar. They're by no means finish grade, and a portion of the overhang on each tread was notched out very roughly so that railing supports could be mounted flush to each riser. Thus, it's not really an option to refinish the existing treads and risers. Instead, my intent was to cut off the overhang of each tread, install new, painted risers over the existing ones, and pre-finished hardwood on the treads, as show in the following diagram: 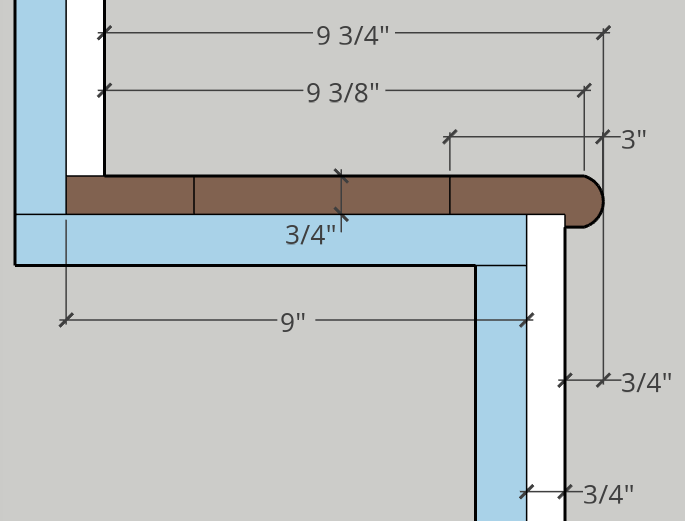 My next thought was just to square the edge of the existing overhang, rather than cutting it off, but this doesn't work for reasons that the next diagram makes obvious:

Alternatively, I could make the spacer a little more robust and paint it white to match the riser:

The obvious flaw with both of these spacer options is that the stair nosing is only 3" wide including the radius, and for a surface that will be subject to constant traffic, I think it may be a very bad idea to increase the overhang. As the diagram shows, I'll only have about 7/8" overhanging the existing tread. I plan to install the stair nosing with both nails and construction adhesive, but I still worry that I'm asking for them to squeak or come loose by increasing the overhang.

A Few Other Options

Aside from the above, I realize I have a few other options, but I would rather avoid them if possible:

So the question is, what's the best way to approach this? Should I just not worry about shortening the steps by 5/8"? I know I'm already at the minimum allowed by code, but the stairs don't really feel short to me. Or should I go with one of the spacer options. If so, any advice on how to secure the stair nosing? As a final note, I should say that there will be inspectors in my house due to other open permits. I highly doubt they will measure the stairs, but I suppose it's always possible.

From your diagrams, if to scale, it seems as though you are going to use an actual tread and not a veneer covering. My recommendation is something like... veneer tread covering with bullnose

Another option (we did this) is painting the stairs and have a carpet runner in the middle. We used a gloss ultra pure white cabinet paint which is very durable to scratches. The most effort in this is prepping the surfaces for the paint. Wood putty every hole and make the ends nice and smooth. Final look is one worthy of a design magazine.

Not the answer you're looking for? Browse other questions tagged hardwood-floor stairs or ask your own question.

7
How should stair treads and risers be assembled?
6
Should a skirt board on a stair case be installed over the treads?
0
Stair riser templating when treads are already in
5
Why does the riser go before tread when installing hardwood on stairs?
0
What is the most common stair tread depth and stair nosing length?
6
Refinish or replace an old staircase
3
Top of stairs wood tread to carpet transition level issue
1
How to install pre finished hardwood over existing softwood floor