Is this plaster over gypsum wallboard?

In a Philadelphia-area house built in the early 1950s: I cut out a piece of wall to fit an old work box. The piece I removed is shown below. The original walls were finished in plaster, but I can't understand what I'm seeing here: There's half an inch of plaster on top of what appears to be a modern-style half-inch paper-faced gypsum panel! Is this consistent with known plaster wall construction from that era? If so, what is it called, what does it consist of, and how was it done? 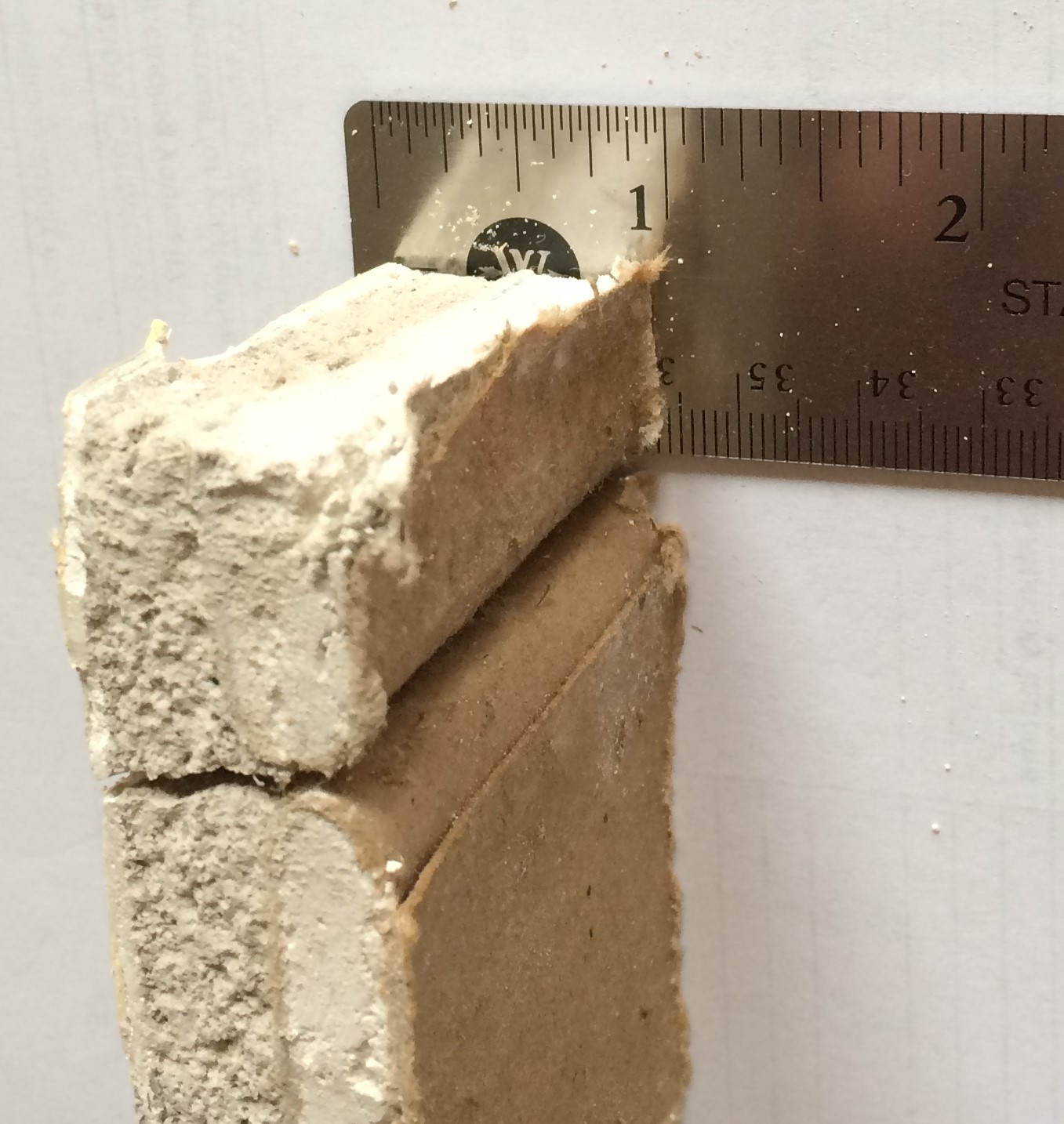 (The house has gone through various renovations over the years, so there are places where walls are just modern sheetrock. But I can't imagine somebody putting up gypsum and then plastering over it!)

What you see there is a hybrid gypsum/plaster from the 1950s. It represents a transitional stage between traditional wood lath and plaster to modern drywall techniques. You'll probably find metal lath at inside corners and metal corner bead at outside corners and door openings. The gypsum panels are 18 or 24" high.

I owned a home with exactly that in it for 17 years and consider it to be the best wall treatment ever devised due to its strength and durability, along with the fact that it can be easily cut to, say, add an electrical outlet.

The term for that drywall like product to my knowledge has been called "rock lath".

All the demo I have done in remodeling, the sheets are/were 3/8" thick and 16" tall by 4 ft. wide. Before rock lath come along, wood lath was installed on the walls as 4 ft. long by approx 1 1/2" strips. It was nailed up in sections that were 16" wide. This was done over the whole wall or ceiling, so that each 16" X 4' section was staggered over the preceding section below. The picture below illustrates this even though it is a ceiling. It gets the idea across. 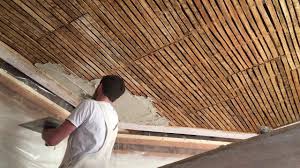 The rock lath was installed in much the same way. Some of the makers of it added holes through the rock lath so the plaster would "key in" the same way the spaces the wood lath allowed. I have also seen rock lath without these holes.

The plaster is installed the same way it is done with the wood lath with the exception of the "scratch coat" needed for wood lath. The layers you see are the "brown coat" (even though this is gray) and the white coat on top. White coat is the actual plaster surface that is painted and very durable. The brown coat, to my knowledge is not plaster, but a portland cement based product used to flatten the walls. Older versions on the east coast would have been different, that is how the term brown coat came to be. Nevertheless, the older scratch coat, brown coat and white coat all make up a plaster wall. The rock lath is installed much the same way the larger drywall sheets are done these days with nails.

I've ran into this now twice on two different remodels. One was a 1960's era basement bathroom and I thought it was totally strange the first time finding it. Then I just ran into it again at my daughter's 1940's built house when we remodeled their Kitchen, Dining and Master Bedroom Closet. Each was 16"x 1/4ish rock lath on the studs and then about 1/2" of sand plaster with a smooth top coat. I found that I could patch with 1/4" drywall stripped on studs and then 1/2" or 5/8" drywall on top to match up the thicknesses. We attempted to cut out for a new door to reuse it to cover where we moved the old door from. The 16" widths of this failed as the wall came down accordion style folding at every 16". Next week we should be back to normal 1890's lath and plaster with a total gut. I hope it's not this crap because the metal mesh that they use makes for very painful cuts.

But I can't imagine somebody putting up gypsum and then plastering over it!

There is a wall finish type called "Plaster Veneer" which is just this. My house (in New England) is done this way. The walls are typically roughed with a gypsum board with a moisture absorbent paper, (sometimes called blueboard) then skim coated with about an 1/8 inch of veneer plaster. The result is a wall surface that is not soft like paper coated gypsum board that has simply been painted. It resists the kind of denting that soft board would get from bumping. It takes wall paper paste well, and can be easily stripped and/or painted. The finish plastering is an art that requires some skill, and the result feels quite smooth to the touch, but has natural variations in the surface flatness due to the hand tooling. 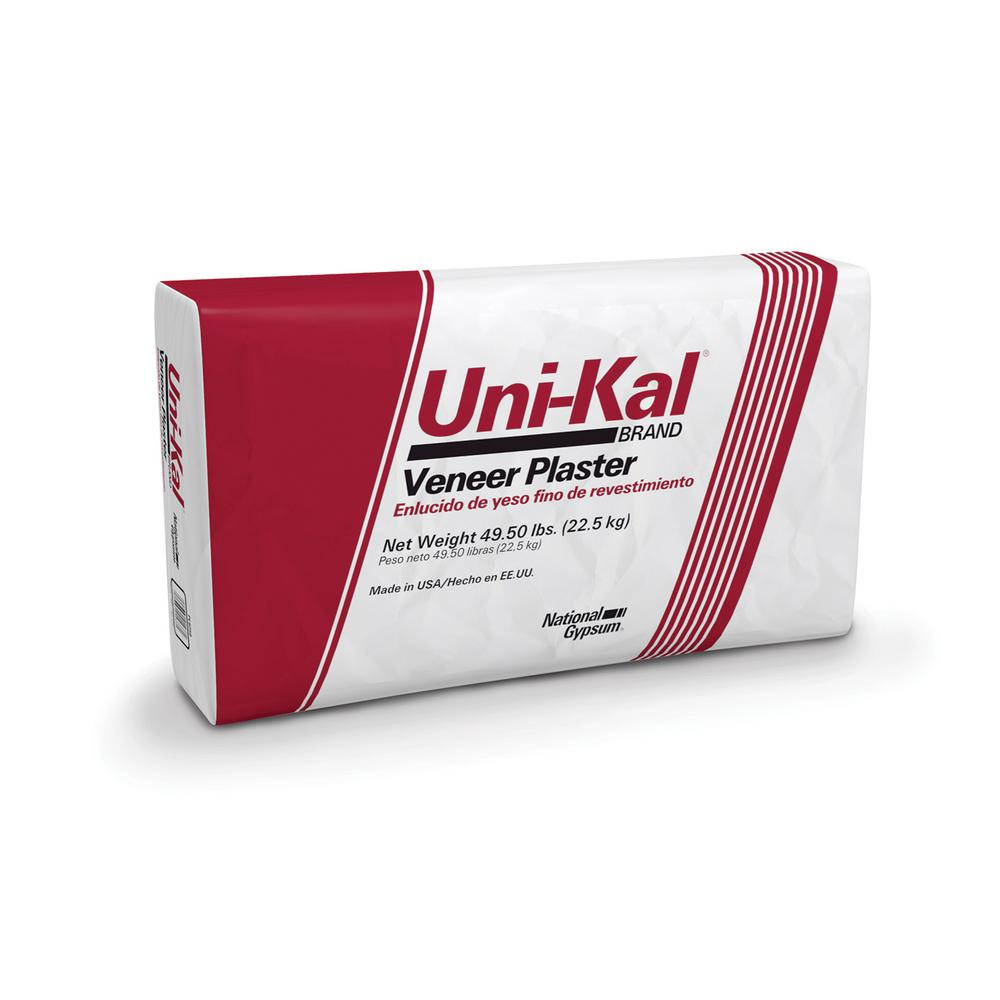 Believe it or not, drywall goes back to 1916. At the time, plaster was considered the superior product. I found this article which describes your scenario

With all its uses and benefits, why were builders hesitant to use something as simple as drywall? At the time, drywall was thought of as a cheap fix, with none of the fine art associated with making plaster. People didn't want to live in homes that were shoddily constructed, so they stuck with the tradition and expense of plaster.

While drywall became the preferred material after World War II, it's not hard to see someone with money (and old-school thinking) in the 50's wanting plaster so you get this strange inversion, where they put the cheaper drywall under the plaster.

Not the answer you're looking for? Browse other questions tagged drywall plaster or ask your own question.

2
How can I fix a large hole in plaster ceiling that's backed by drywall instead of wood lath?
0
Cut through plaster vaneer
1
How to fix cracks in hybrid gypsum/plaster ceiling?

2
is there a sandable compound I can use for a final skim coat over StructoLite plaster?
3
How do I prep and plaster a bowed wall before tiling?
2
Paint peeling off layer of joint compound over plaster, am I in over my head?
1
Should I plaster the walls in my new house?
0
Furring strips visible THRU drywall... On the FINISHED side!
1
Plastering a badly damaged wall
0
Proper way to repair old plasterboard walls?
1
Preparing a wallpapered room for paint