Can new cable be run from switch to ceiling?

I'm installing a new bathroom exhaust fan in a first floor bathroom. I removed the old fan, and have the new one, but here's the problem...

I figure I have two options... call an electrician and have them run a new wire to a new switch, or get into the wall to do it myself. The room is being painted, so if any drywall repair needs done it's no big deal. But if I end up going into the drywall myself, who knows what other problems I could run into.

If that cable was 6-8 inches longer, it would make it to the housing for the connection, which would be to the far left in the picture. Or if I could find a fan that had the electrical connection on the joist side instead of opposite the joist. 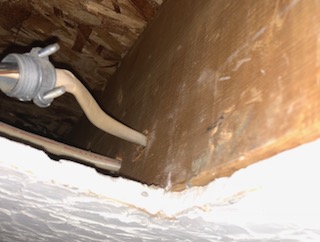 As @Tyson mentions in the comments there are devices listed for repair of NM cable such as the Tyco device mentioned in this answer. However it would actually be pretty hard to get that in there, and I believe it's only listed for repair, not for extending.

You can mount a junction box and use that to house a splice to extend the cable. Inacessible junction boxes are not permitted by code (see below.) However this box would be accessible by removing the fan. By most interpretations, that does not count as **removing part of the building. **

It looks like there is room to mount a handy box out of the way of the fan and the existing cabling. If not, you may be forced to remove the drywall.

314.29 Boxes, Conduit Bodies, and Handhole Enclosures to Be Accessible.

Boxes, conduit bodies, and handhole enclosures shall be installed so that the wiring contained in them can be rendered accessible without removing any part of the building or, in underground circuits, without excavating sidewalks, paving, earth, or other substance that is to be used to establish the finished grade

Not the answer you're looking for? Browse other questions tagged electrical wiring fans or ask your own question.

13
Is there an NEC-compliant method of repairing minor damage to electrical wire insulation without a junction box?

2
How can I run a coaxial cable into an existing single gang electrical outlet?
3
Can I connect a combination heater/fan unit to the existing bathroom wiring?
8
What type of wire should I run when updating a ceiling fan?
1
Wiring from Oven to Switch
0
Wiring new ceiling fan to existing light switch box
0
12/3 w/ ground run from switch to ceiling fan. Way to jump 12/2 for new light with independent switch?
3
Wiring for a ceiling fan. Do I create a switch or can I hard wire directly from a wall outlet?
0
Extending wire from conduit to reach into new bathroom ceiling fan