Half wall supporting 18" overhanging counter — can this be done?

As part of an upcoming kitchen remodel we plan on knocking down a (non-load bearing) wall between the dining room and kitchen. We are thinking of converting a portion of the existing wall to a half wall and placing an overhanging quartz countertop on it to create a peninsula. See attached Sketchup screenshot. This layout was suggested to us by a professional designer and my question is whether it makes sense structurally. Normally there would be a row of cabinets on the other side of the half wall, and the total amount of overhang would be ~1/3rd the overall width of the slab. Unfortunately there is no room for this in our 1950's-era, 10'x10' kitchen so the entire piece would need to be supported by the 4" half wall. I could perhaps see this working with enough reinforcing but I wanted to see whether anyone else has attempted such a feat and what the outcome was. 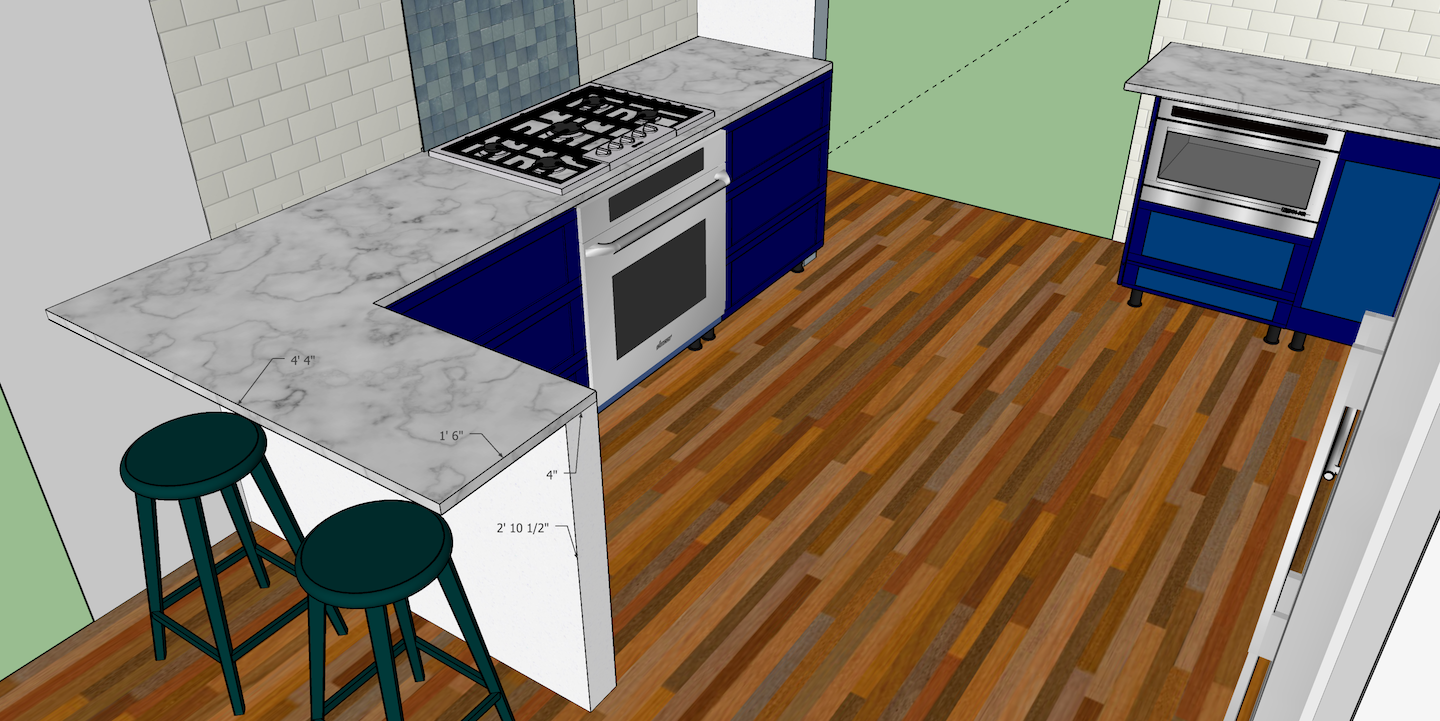 For countertops, 3 cm is fine but that's thin for something free-hanging. To avoid the stone breaking, the slab needs even support in a lot of places. You don't want a long unsupported area that people will lean on or that might have something dropped on it. You can do it with a lot of full-width supports, like Eli Iser links to in a comment. But you need support near all of the edges and at regular intervals in between.

An easier way to accomplish that is to have the slab sit on a solid top (like 3/4" plywood), which also provides a place for fastening all of the support. It should be as big, or almost as big, as the slab. You can cover the edge for appearance. That would also serve as the top surface of the half wall.

To avoid torsion forces, you need to support the free corners. At the back wall, you can fasten a horizontal support board to the wall that the top rests on.

That will still leave a very heavy 4' span that needs support. Put some type of brace in the middle that fastens to the half wall (ensure there's a stud in that location when the wall is built) and provides support to a point most of the way to the outside edge of the overhang. You can avoid knee interference with a right-angle or curved brace. But it should be something that is seriously strong and rigid, not something like the utility brackets used to put up garage shelving that sag under load.

Keep in mind that the issue isn't so much that the half wall will fall over. The issue is any part of the slab support structure sagging or twisting even a little. If that happens, you're still holding the slab off the floor, but some part of it won't be supported. Then it doesn't take much for the slab to break.

Not the answer you're looking for? Browse other questions tagged kitchens framing kitchen-counters remodeling or ask your own question.

3
Can I support a granite countertop overhang with embedded steel bars?

5
How can I tell if my counter top is silestone or granite?
3
How do I install a butcher block breakfast bar on a half wall?
2
Can I use silicone “window & door” caulk between a kitchen counter and backsplash?
0
How can I fix this gap in my kitchen counter?
0
How to stabilize half-wall below an interior portal?
0
Best way to fit this dishwasher under the kitchen counter?
0
Kitchen sink half-wall against brick: which layer to drywall?
2
Attaching wall frame and soffit to a load supporting beam
2
Is this half wall with spindles load-bearing?