How can you add a standard light fixture to a ceiling fan?

How can I take a regular old ceiling mount light fixture - such as the one below - and add it to a ceiling fan? 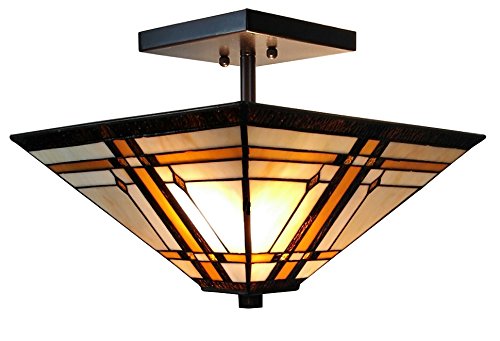 I can see in the customer reviews that someone has mounted it to a ceiling fan, but sadly the person gave no information, only a picture: 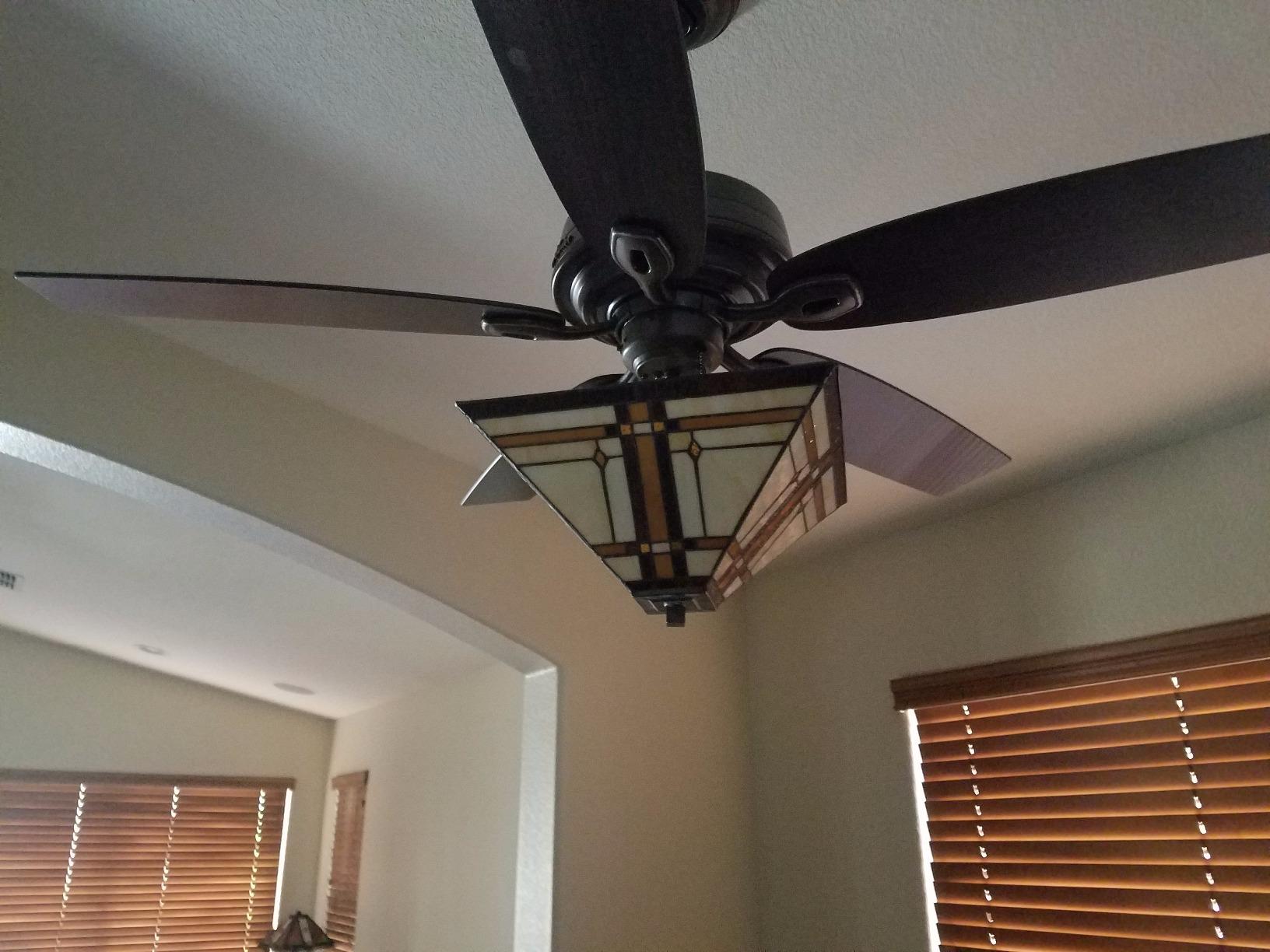 Any idea how I'd do something that?

Do you think they took a ceiling fan that already had a light similarly sized to the light fixture and simply replaced the lamp shade?

I also see that there are Ceiling Fan Fitters - but none look like they'd really accommodate a lamp shade like this one (for example, they have pull chains at the bottom that can't be removed)

Good questions, and it sounds like a viable and fun project. Some things you'll need to consider are: how do you want to turn the light on and off? If you currently have a fan that turns on with a wall switch, do you want the light to come on at the same time? Always? Typically, ceiling fans are pre-wired for a light kit, so you wouldn't have to worry about getting the wires all the way through the ceiling fan to the ceiling box. They're already up there. However, if you look at the instructions at Lowes.com (https://www.lowes.com/projects/build-and-remodel/install-a-ceiling-fan/project), you'll see there are a black, a blue, and a white wire at the top of the fan motor unit where these conductors are to be tied into the house wiring. The black is for the fan, the blue is for the light and the white is the return path (AKA "neutral") for both. 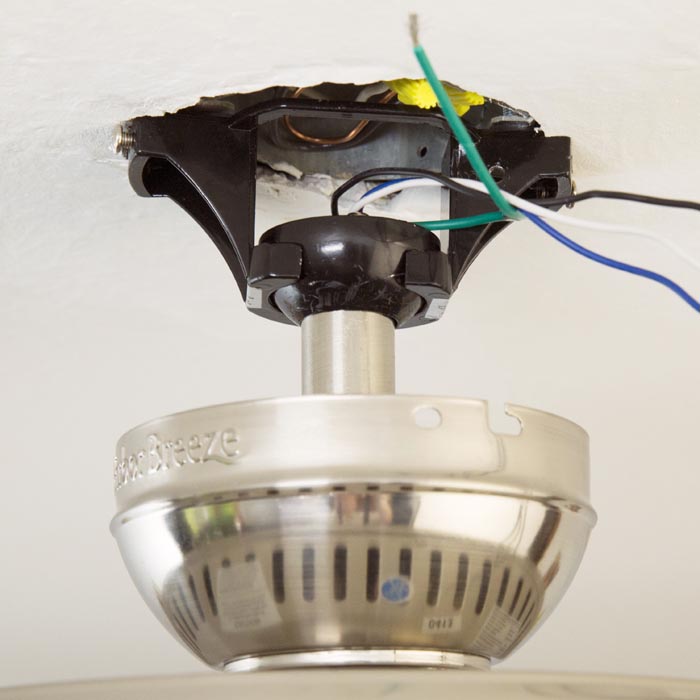 Usually when we install fans, if there is only to be one wall switch, we tie the blue and black together with the hot switchleg from the wall switch. But then we would use pull chains to control each load independently. It sounds like you might want to stay away from pull chains, that is, if you do not think you'd be able to modify your shade to allow a couple of pull chains to drop down through the bottom.

In another scenario, if there are two separate switches to control fan and light we keep the black and blue conductors separated from each other at the ceiling j-box, tying each to its own switchleg. This would be closer to ideal for you, but you'd have to ensure you have the third insulated wire up there in the j-box or else you'll need to fish another cable in and down to the location where you want to install the extra switch. One more thing to consider is the fan pull chain is normally where you control the speed of the blades. I'm wondering if the set-up in the picture from the customer review included a remote control kit option--something that would eliminate the need for pull chains as well as a third conductor. A remote unit can select fan speeds as well as turn the light on and off independently, although they are usually a pain to install and you'll need to make sure you get one that is compatible with your particular fan. 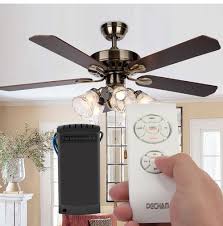 Now onto the installation of your light on the fan. The lowes.com article I mentioned above walks you through the steps of attaching a light kit to a fan with no previous light kit, but it doesn't explain modifications. When you get to step one, loosen and/or remove the screws around the very bottom of the fan to pull out the switch housing cover plate. 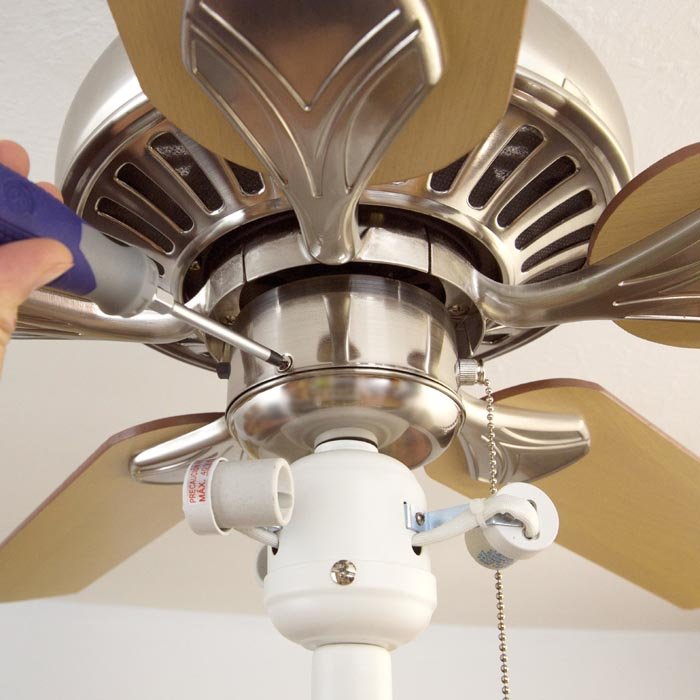 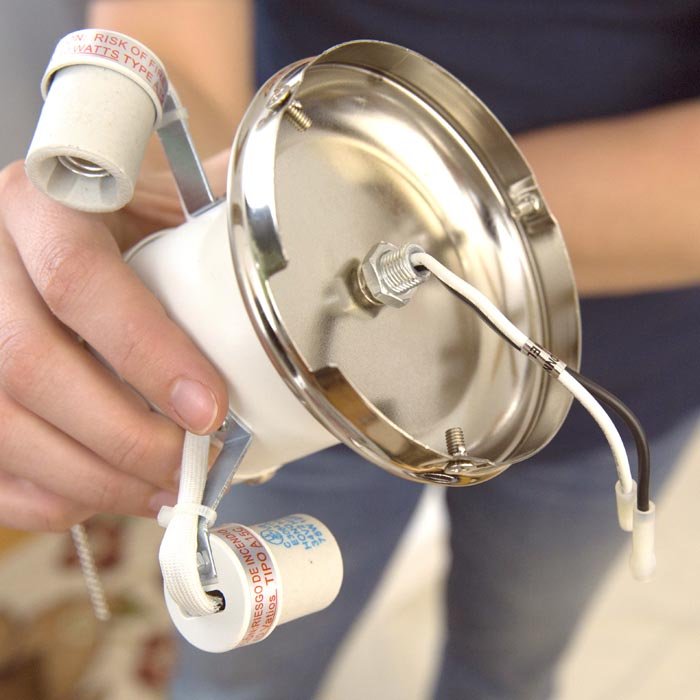 For your project, you'll just have to adapt the stem of the lamp to this plate, and I'm guessing it might just fit without any further modifications, but if it doesn't and you have to drill the hole out larger to accommodate the stem, just be sure to secure it so that it will not wiggle as the fan vibrates. You may have to use an extra lock nut on the bottom. From there, you may have to clip off the connectors from the blue and white wires inside the fan and wire nut them to your lamp cord conductors. By the way, speaking of lamp cords, I don't know if your light fixture will have an actual lamp cord (the kind that has to be pulled apart to separate the two conductors) but if it does, be careful: lamp cords are designed to be polarized for safety. There is a smooth side and a rough or ridged side.

Yes, the interesting bit you call a "lamp" is actually a lamp shade. The guts with emitters and wires are pretty boring and look about the same.

Lamp shades are easily interchangeable on all sorts of lamps. They simply own a fan that already has a light on it with the usual standard lampshade hub, and changed the shade.

However a shade on a fan had better be ready to deal with some serious vibration. So that thing could have failed a week later and they just forgot to post that fact on amazon. People on social-media post their successes, not their failures.

Not the answer you're looking for? Browse other questions tagged light-fixture ceiling-fan or ask your own question.

0
Can I add a pendant fixture to ceiling fan?
2
Mount ceiling fan to joist on sloped ceiling
0
Mount Ceiling Fan to Old Junction Box?
0
Can ceiling light mount box be used to attach ceiling fan?
1
Neutral and ground wires for ceiling fan wall control
1
Questions on smart bulbs (Zigbee type) in an old ceiling fan/light fixture
1
Ceiling fan with light - electrical box has two cables, one with a red wire
0
How should I go about removing a ceiling mounted downrod light?