How do I fix a sewer snake cable that has kinked inside the spooler cage?

I had to snake out my sewer this weekend and rented a large sewer snake from the hardware store. When I hit the problem area the cutting tip on the end of the cable apparently got stuck and I didn't realize it in time. The snake model I rented has a foot switch and I kept my foot down, turning the spooler too long, trying to cut through the problem area. I have to admit I heard a couple of clanks inside the cage where the spooled cable is and that should have warned me, but being a newbie at this I thought it was just the sound of the cable vibrating from the work I was doing in the drain. Next thing I know I've got cable inside the cage all wrapped up around itself in several twisted loops. The cable wouldn't come out any further because it was blocking its own way.

My question is, how in the world do you get this unstuck? I went down to the hardware store, asked them. The know-it-all guy there said it would come unstuck, I just had to twist it back the opposite way. Well, I tried doing that, but that is spring steel cable we're talking about. The more you twist, it just wants to unwind all the harder. I stretched the exposed cable out straight, clamped some vice grips close up to where it exits the cage (which I blocked from turning with a screwdriver jammed in sideways) and tried twisting out the cable manually. That only worked to beat me up a bit when it got away from me and unwound my futile efforts. I tried running the machine in reverse and letting the vice grips brace themselves against a cinder block. The motor has enough torque to drive completely over the block, vice grips and me. I tried clamping one end of the cable in a bench vice, but this just made things worse by causing extra kinks in the cable outside the cage. All the while, my sewer is still backed up and we had a birthday party fastly approaching. I ended up calling in the real plumber and he got the drain flowing again. I still have to take the snake back in on Monday morning to avoid another $50 rental charge.

A related question would be, how do you get the kinks out of this type of cable, except I figured that one out by clamping the cable just below the middle of each kink in said bench vise and then wrestling the snake in the opposite direction of the bend. It straightened up pretty nice.

Sorry, my phone(camera) isn't working so I don't have pictures of this little "adventure" to share.

I found a solution in time to get the rental unit back to the store this morning. This whole ordeal was painful, but I think if I can share it in a way that helps someone down the road I'll feel better about it. So this is what worked for me: I took a crowbar and, after examining the loop and twists inside the cage more carefully, found a place to pry part of the loop out of a side opening in the spooler cage. It definitely wasn't easy, but from that point on it suddenly got really easy to untwist it and work the cable back in and then out the way it was supposed to exit.

Here's a similar machine like the one I used. From a websearch, I see some others out there that don't have the cage but a more or less solid spooler. My crowbar method probably wouldn't work on some of them. 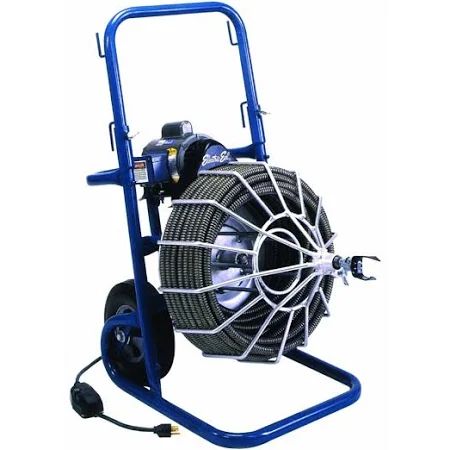 When this type of cable kinks it creates an almost 90-degree bend in the inner core of the cable at the apex of the loop. This would not work very well as a drain cable anymore. So, when you finally get it untwisted the cable kinks themselves have to be straightened out. I used the method I mentioned in the question to straighten it out as I had the others. I clamped the cable in the bench vise just below the bend and then, using a lot of strength, forced the cable backward over the bend. I had to go beyond the straight mark so that it would spring back straight. I hope this answer helps anyone else that might find themselves in the same predicament.

When winding cable back in drum do not use rewind function. Use forward function or for best results push in manually without power

Not the answer you're looking for? Browse other questions tagged plumbing drain powertools sewer or ask your own question.

1
Question about my sewer stack situation
0
Foul smell in my bathroom when I run water anywhere in my house
1
Is the diameter of drain snake cable the bigger the better?
1
Basement shower not draining; dirty water now seeping back up drain
1
Planting tree - hit sever line?
1
Clear Drain from Toilet to Street
2
Unable to remove push-pull stopper from tub drain
0
Clog before 90 bend
2
Does a kink in a snake ruin it?