LED light glows when switched off 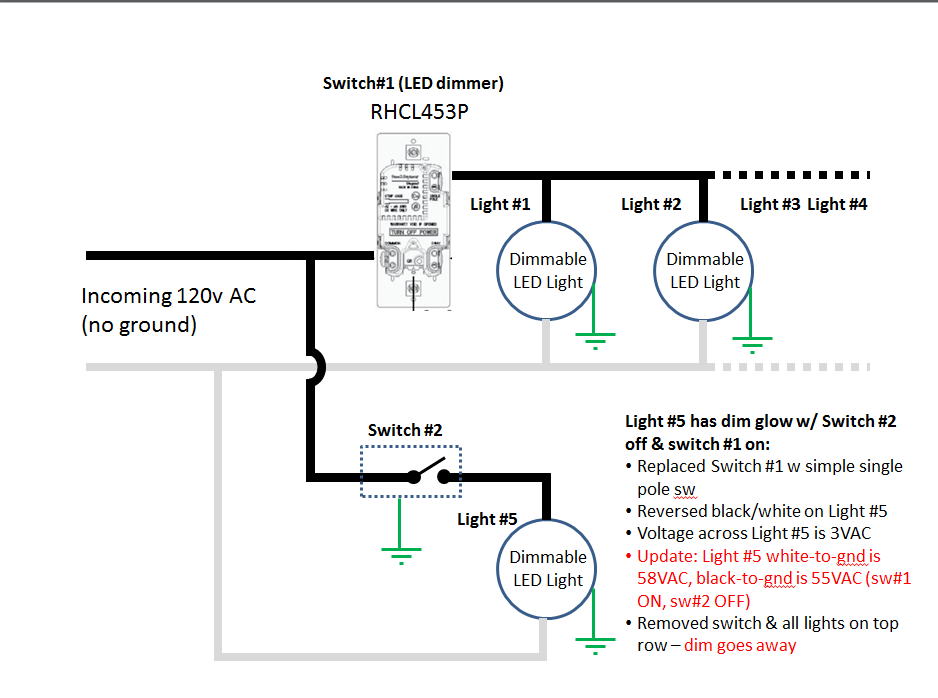 I know this has been posted and answered in many ways. I wanted to add some more troubleshooting that I did with same results!

The glowing is definitely the result of a voltage, not any kind of chemical/residual

I am stumped! Thank you for any help!

*** so it looks like the 4 lights in parallel on top are causing the problem. With Sw#2 OFF, there's a decent amount of voltage to ground at the dim-lit LED, (white 58v and black 55v), enough to dimly light the LED. So now I am thinking the guy incorrectly wired the 4 parallel lights. there's NO incoming ground (old house)... ok to not tie grounds together?

The way you have drawn the circuit is correct for an ungrounded circuit. However if that is your real configuration, slight illumination on lamp 5 is simply impossible. There is no current path which would make this possible, unless through the grounds.

That tells me most likely, your drawing does not reflect reality. Inspect more closely.

You draw grounds like an electronics guy, just stick the symbol there and "armwave" it, but grounding cannot be armwaved. It is a very big deal. Since the source is not grounded, grounds should not be interconnected amongst the new things you have added: This creates an "island of grounds" (see what I say here): Now touching a switch plate cover screw can kill you.

Grounds must start at the physical earth, go via the grounding electrode system to the panel, then from the panel to each grounded point in turn. Retrofitting is allowed, so the grounds don't need to follow the same route as the conductors, but grounding must spread from the panel. No islands. All that said...

....I really don't see how grounds can have anything to do with it, unless you have done something really dumb like bootleg grounds off neutral, or several of your LED lights have neutral-ground faults and they're wired backward or something. I assume you are checking for that and fixing it.

Anyway, look closer at your wiring and I believe you will find there's a mismatch between the drawing and what you actually have. If you want to shoot some pix of the junction boxes, particularly the box where the two subcircuits diverge, we'd be happy to have a look.

8
How should ground wires be handled when updating switch loops in an older home?

0
5W COB led recessed light on a parallel circuit having different Brightness
1
Light bulbs won't dim
1
LED lights dimly lit when off
0
Why do some LED lights go dim while others go out completely?
1
Why are some of my string of LED lights dimmer than the rest?
0
LED lights on (dimly) with only one electrical line connected?