Brick fireplace - pulling away from wall

I have a brick fireplace that is 8 feet wide by 39.5 inches tall.

The brick is pulling away from the wall. Attached pictures show what is happening.

I can see the brick was attached to the studs with nails.

One idea is to use a heavy duty jack to push the brick back into place, but wondering how to make the brick adhere to the studs (if it is even possible to safely move the brick using a jack).

Any thoughts on this project would be appreciated. 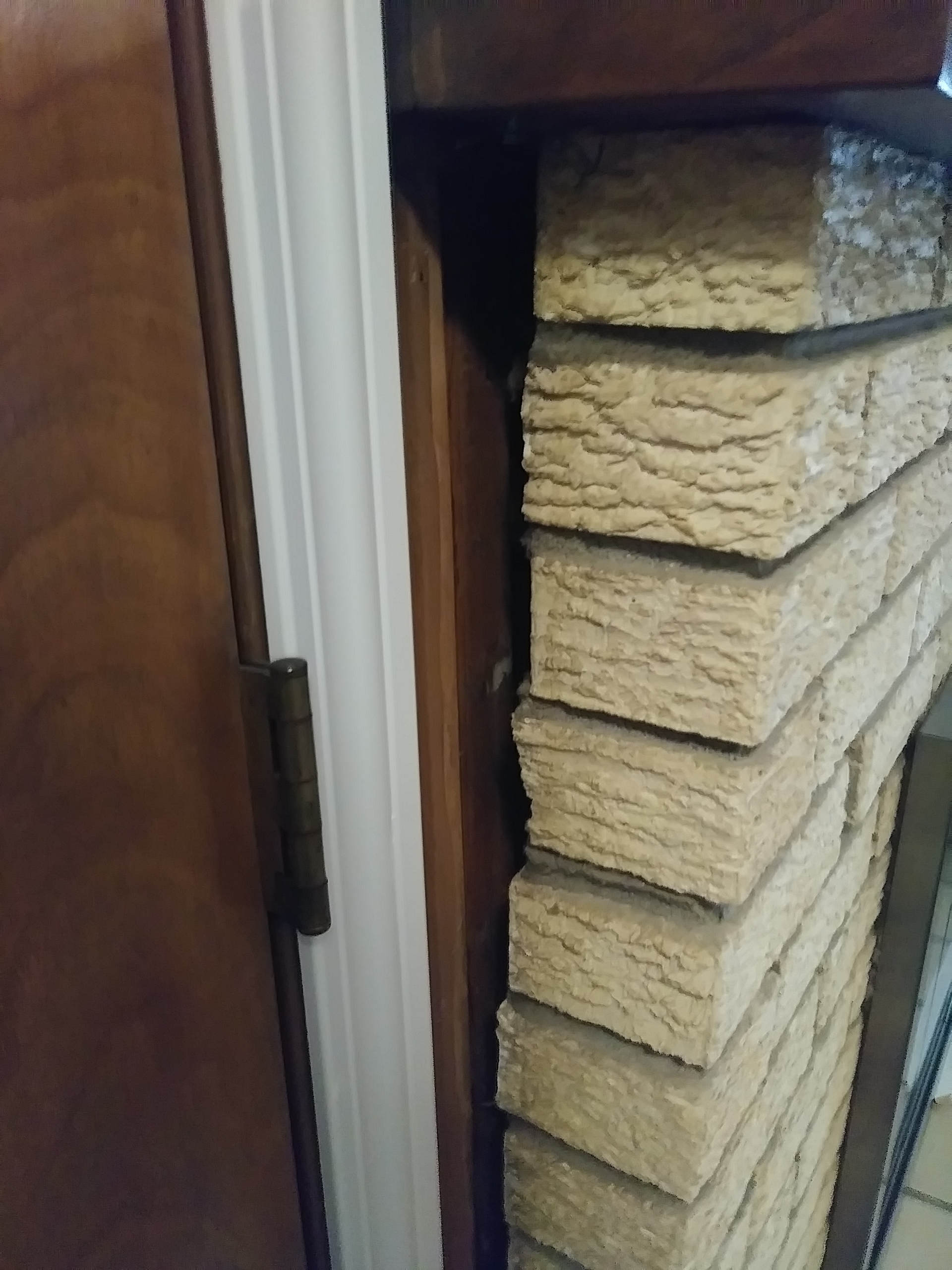 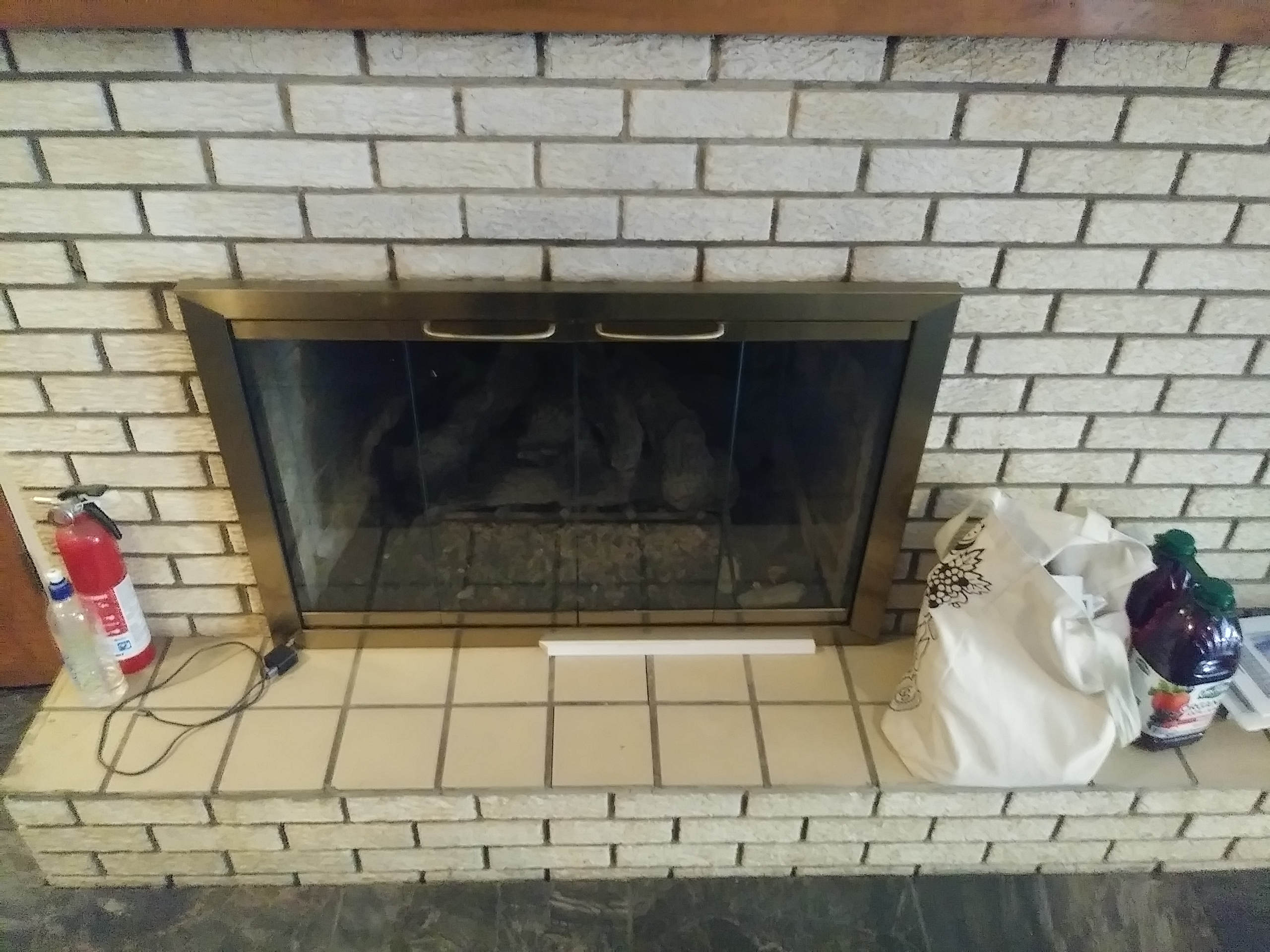 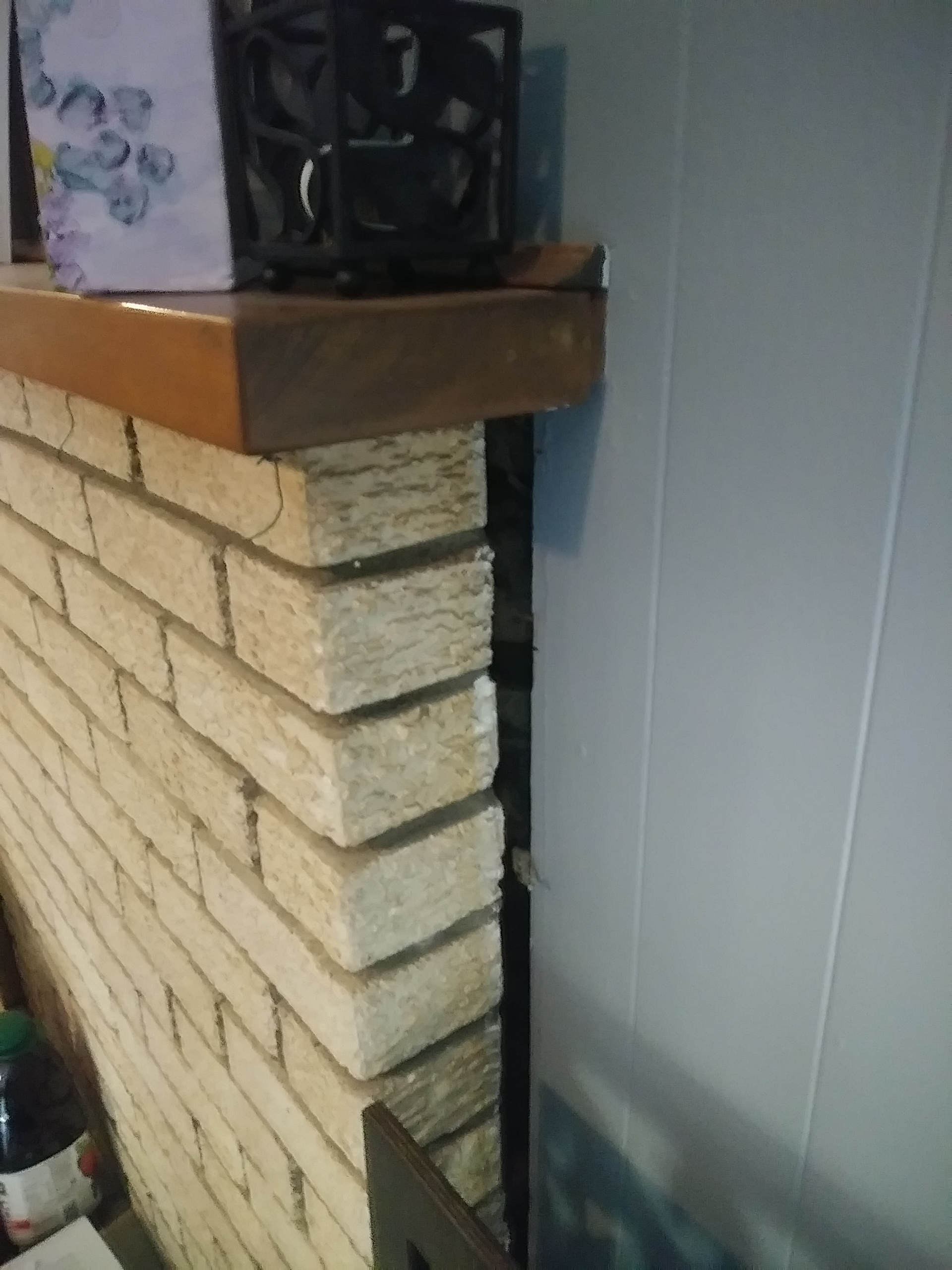 I would not leave it as is and cover the gap. I would apply a thick application of heavy duty heat resistant construction adhesive to the studs that you can reach and then push the brick face back to the studs either by jacking as you mentioned or better in my opinion would be:

Carefully drill 1/8" holes through the mortar then enlarge to 1/4" directly in line with the studs on each side so they are just big enough for a 1/4 lag bolt. One in the mortar just under the second course of brick and another about 18 to 24 inches lower. I would then cut two 2x4's just shorter than the distance from the hearth to the bottom of the mantel. Drill holes in the 2x4's that match the holes in the mortar. Now you can use a lag through the boards with a large/wide washer to slowly suck the entire face back to the studs.

I would pre-drill a pilot hole in the stud with long bit, (maybe 3/16"), so your lags can get a started and not bind too much and break. Apply your adhesive and place the 2x4's in place, put the lags in place and use a ratchet to tighten the lags. Start with a lower one and work your way around in circular pattern. Go slowly, two turns at a time on each of the bottom ones and then the same on the top, slowly drawing the face back to the studs. You will need to use your best judgment to know when to stop, look at the gap, "feel" resistance when you get close. You want to make sure that the adhesive is contacting the back of the bricks. Leave the the 2x4s in place 24 hours for the adhesive to cure. You can then remove the lags and boards, and patch the holes with mortar.

As added insurance, I would install a piece of quarter round or some other molding just under the mantle up against the brick. Glue and screw the molding to the mantle so it acts as a stop if the adhesive should fail in the future.

Mind you this is just an idea and I do not know if the whole face will move back without some damage/cracking of the mortar joints. Perhaps the middle will bow if the old fasteners bind? Maybe a 2x4 in the middle if you can line it up with a stud. Or maybe a piece of 5 quarter plywood cut to the size of the brick face and placed between the 2x4's and the brick work. Again this is all theoretical.

IF you go the leave it in place and cover the gap method I would at least secure it with quarter round molding under the mantle if nothing else.

Mortar shrinks over time, very slowly, but it can be worse/quicker if the mortar was improperly formulated when originally installed. Trying to push it back will likely crack it and nothing is going to make it "adhere" to the studs.

It if were me, I'd just leave it alone and put some molding around the edges to cover the gap, making sure you have some added room over the brick. Attach the molding only to the wall, not the brick, because it will continue to move over time.

Check foundation of the house. Catch it now before it gets worse. The house is moving. I have gone under houses and had you add new supports and floor joist before. Catch it early so it doesn't get worse. The fireplace is safe. It is the house I'd be concerned with. Get the house jacked up be a specialist. And you will see that wall move back in place with the mantle.

Not the answer you're looking for? Browse other questions tagged fireplace masonry or ask your own question.