Using a multimeter, I have determined that the bottom red wire is the line in and the top left red wire is the load out for the living room outlets circuit switch. I believe the white wire is neutral for this circuit because it will only show voltage on the multimeter when connected to the load, however, it was not connected to either of the switches.

The kitchen lights circuit is more confusing. I believe the black wire is the line in and the red wire is the load out, but both wires show voltage at all times (black: 120 V, red: 20-40 V).

Here is a circuit diagram and picture of the electrical box for reference: 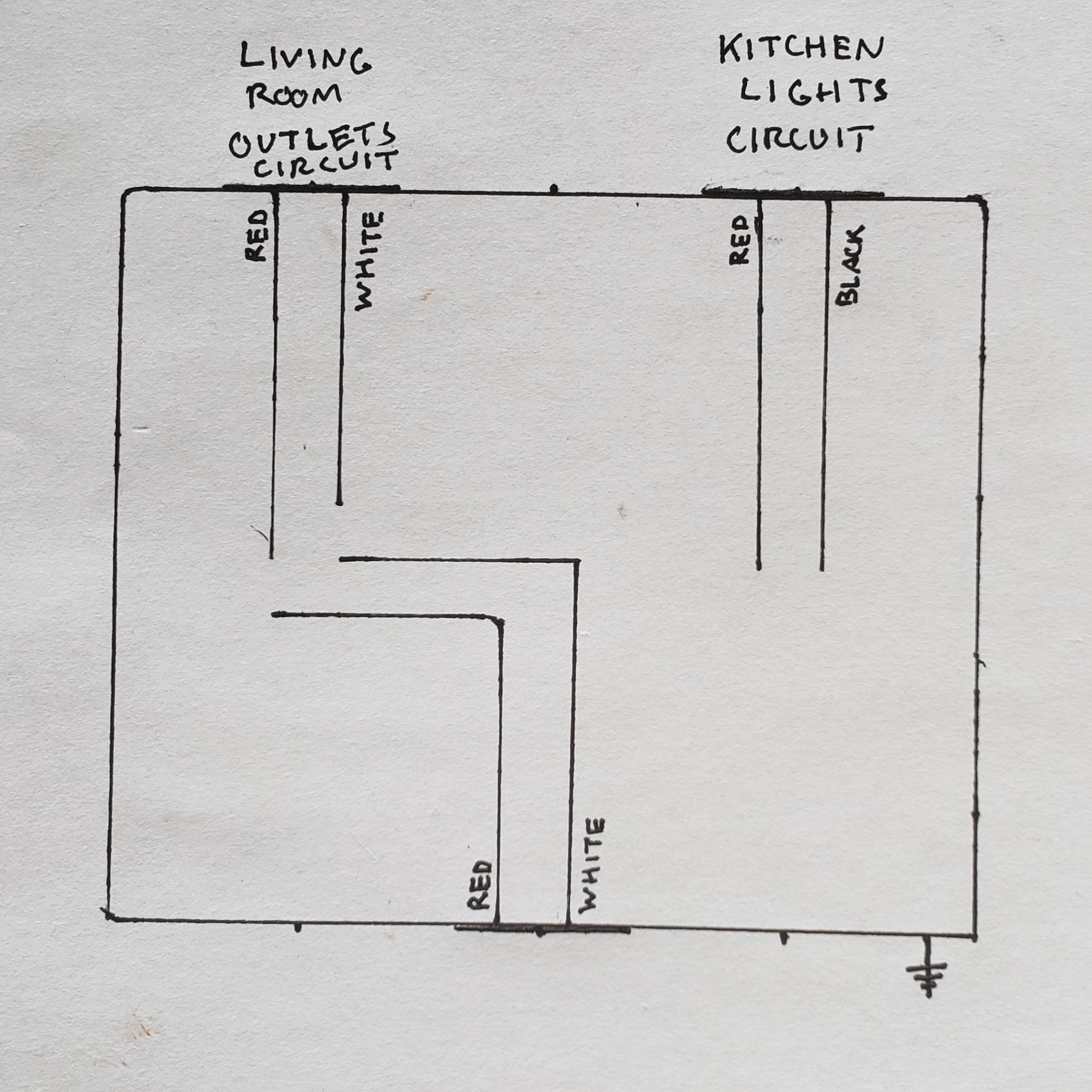 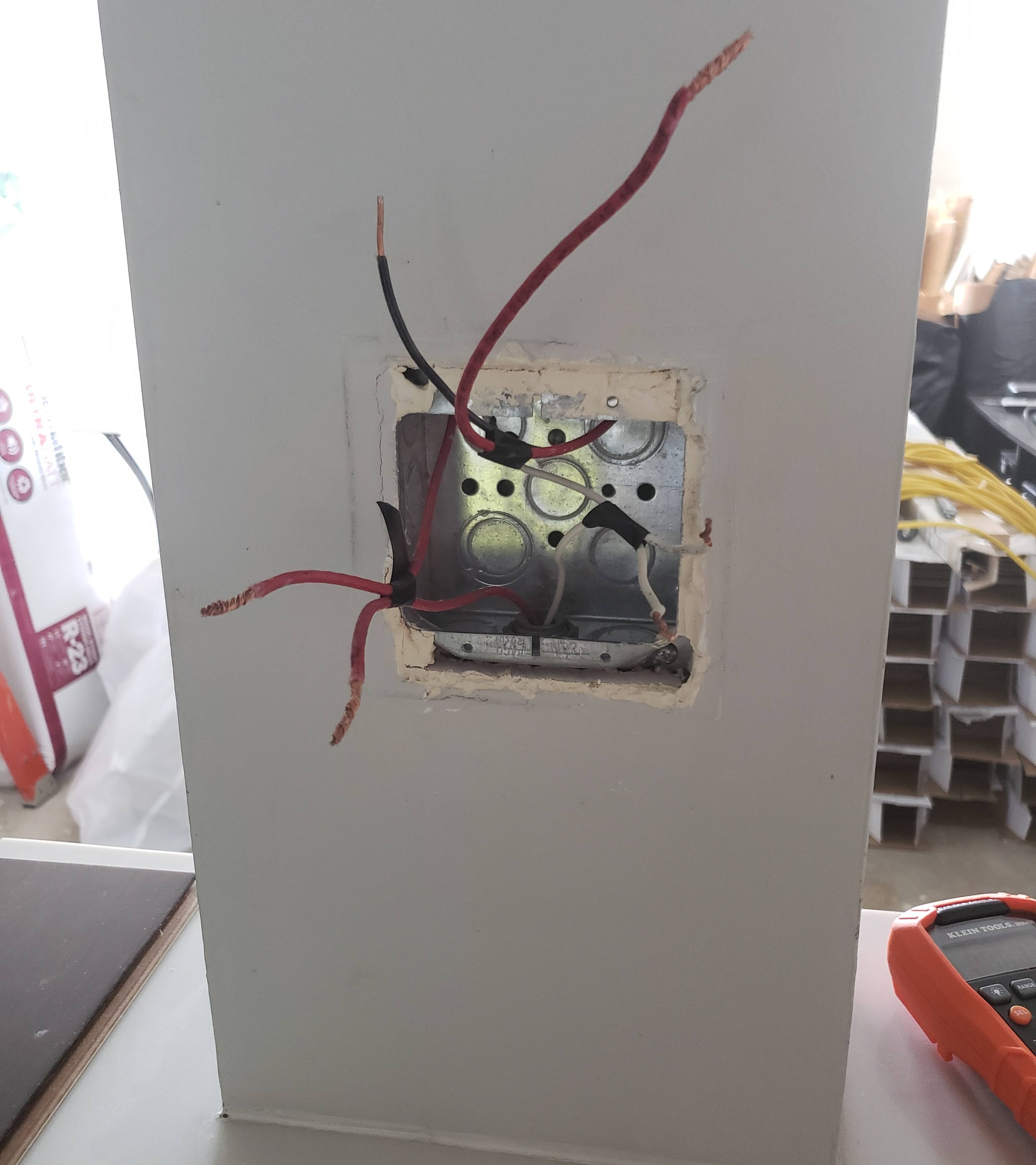 That's not news to you. This is: NO SUBSTITUTIONS. In things like switch loops and 3-way circuits, you often see a white wire used as a "hot". They're supposed to be marked with tape but nobody does. This is only allowed in cable wiring methods where you have no choice of wire color. Not here! In conduit with THHN, you must pull the correct color, period.** You can mark them with tape, but doing so can't turn a neutral to a hot.

Another thing about conduit is the new "neutral in a switch loop" rule does not apply. That's because it's easy to pull a neutral wire in the future. Switch loops will have always-hot and switched-hot.

One rule remains the same: Currents must be equal among all wires in a cable or conduit. This could also be called the "Tree rule": circuits can branch but one branch can't loop back to rejoin another.

A side-effect of this rule is neutrals are not promiscuous: A neutral can only be a neutral for the circuit it's part of. For instance you cannot use the lower-left white wire to provide neutral for the upper-right black wire; they are on different circuits and this will result in unequal currents in both conduits, as well as overload the neutral. Neutrals don't have circuit breakers! Their only protection is honest wiring: If a neutral returned two circuits' worth of power, it would overload.

Any promiscuous/stolen neutral issue will also trip a GFCI protecting the circuit.

To answer your questions briefly, #1 if it's white, it's neutral for the accompanying circuit only. #2 That's just phantom voltage from running parallel to the hot wire. Don't worry about it. #3 NO because that would involve stealing neutral and violating the "equal currents" rule.

So on to your problem. Let's divide and conquer.

Current can't return from a load without a neutral. And currents must be equal in each conduit. And there's no neutral in the upper right conduit. That means it can only be one thing: A switch loop. You confirmed this in comments. A switch goes there.

I imagine the red and black went to the two conductor screws on one switch. This is the only possibility without violating the "equal currents" rule, so it must be so. If you feel the switch is useless to you, you can create an "always off" switch by capping both wires separately -- or an "always-on" switch by tying both wires together with a wirenut. That would free up one yoke space in this box, for say a receptacle.

You cannot alter this circuit without a lot more analysis and work. Next.

Reds went to the switch, whites nutted together. Straightforward stuff.

(This bundling by color is lucky, it's not a sure thing and can differ in different circuits.)

* Conduit in residential is unusual. Chicago requires it, mixed-use developments probably require it, large multi-unit buildings, or your electrician is picky! I've seen Romex Kaisers fill conduit with only black, white and red THHN, thinking they must follow the exact same color code as cable, but those fools would pull black+white for a switch loop (illegal obviously) and that didn't happen here.

** Except in very large sizes, 4 AWG and larger, generally used as feeder or service.

That white is a neutral indeed

Since your wiring appears to be in conduit, we know safely that the white wire is indeed the neutral to the living room outlets circuit.

That funny voltage is just a ghost, ignore it

That 20-40V reading is what is called a ghost voltage that is coupled to the red wire from the black wire by dint of them running in the same cable together (its a capacitive coupling effect, to be precise). One can ignore it, or use a meter with a "Low-Z" function to make it go away, as there's no "push" behind that 20-40V.

The bad news is that since the thing coming from the "kitchen lights" circuit is a switch loop (and an apparently-defunct one at that), you cannot move the existing living room lights to there without pulling a neutral through the conduit to where the "kitchen lights" circuit is fed from. The good news, though, is you can have your switch and your receptacle here -- simply pigtail the always-hot and neutral from the "living room outlets" circuit to the receptacle, which should have its ground pigtailed to a ground screw in the back of the box or be a self-grounding type as the conduit is your ground in this installation.

The neutral off to the kitchen lights joins in with the remaining neutrals, and the always-hot is also pigtailed to the switch, with the other switch screw hooked to the switched hot. Since it appears you won't quite get solid yoke-to-box contact for the switch, you'll need to pigtail the switch to a ground screw in the back of the box. Last but not least, the two kitchen lights wires need to be capped off individually so that they won't short to anything.

2
In a gangbox with switches on two different circuits, how can I identify which neutrals are associated with which circuit?
1
Can I join two switched circuits into one circuit?
1
Is it common, or even correct, for both wall switches in a double gang box to provide power to a ceiling fan/light fixture?
1
Wiring timer switch into 2-gang switch setup with common load (red) with downstream load
2
Tricky Three Gang Box Problems
1
Wiring Diagram for Double Gang Box - Double Toggle Switch + GFCI Receptacle
3
Two separate gauge wired switch in one double gang box
1
Installing smart switch in a double gang box with a switch loop (?) - everything in the same circuit - Montreal, Canada