Should the cord on my miter saw have a grounding wire and plug?

I have inherited a chop saw, hooray, but it only has 2 prongs on it’s power cord. Is it safe to use? Is there a way to ground it? Thanks!

The third (earth ground) prong simply returns current to earth in case of a such a short so the housing doesn't become hot. If this kind of short happens and you have a third prong, you'll pull lots of current momentarily from the wall through the housing down to earth ground at the moment the short occurs and trip the breaker. If you don't have a third prong, you become the conduit between the hot housing and earth ground when you touch the device, which could be long after the short mechanically has occurred, since the short is "waiting" for a return path -- i.e. someone touching the housing.

Look for a symbol like this, the "box within a box" as described earlier. It means it is "Double Insulated" and the grounding pin is not necessary. 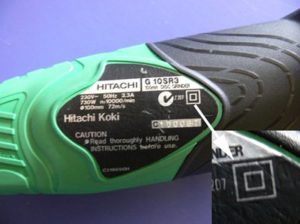 Not the answer you're looking for? Browse other questions tagged electrical powertools or ask your own question.

12
Does a 2100W angle grinder need an earth pin?
1
Why does my Dewalt power drill only have a 2 prong plug?

3
Can I use a polarized cord and plug to rewire a non-polarized clock?
2
Is it safe to wire a plug-in sconce directly to the junction box?
1
What should I do with the exposed grounding wire during a conversion from hardwired to plug in light fixture?
1
Installing new dishwasher but using existing power cord
0
How to wire a three-prong extension cord to 110 outlet?
0
Is there anything wrong with using a PC power cord for a miter saw?
0
Can I use a 120V power cord on a 208V 3-phase circuit?
4
GFCI - should my neutral and ground have continuity?
12
Can I safely plug a two prong plug into an extension cord with a ground socket?