I have a sprinkler system that I winterize each year by blowing air to remove water. The system looks similar to the picture below. 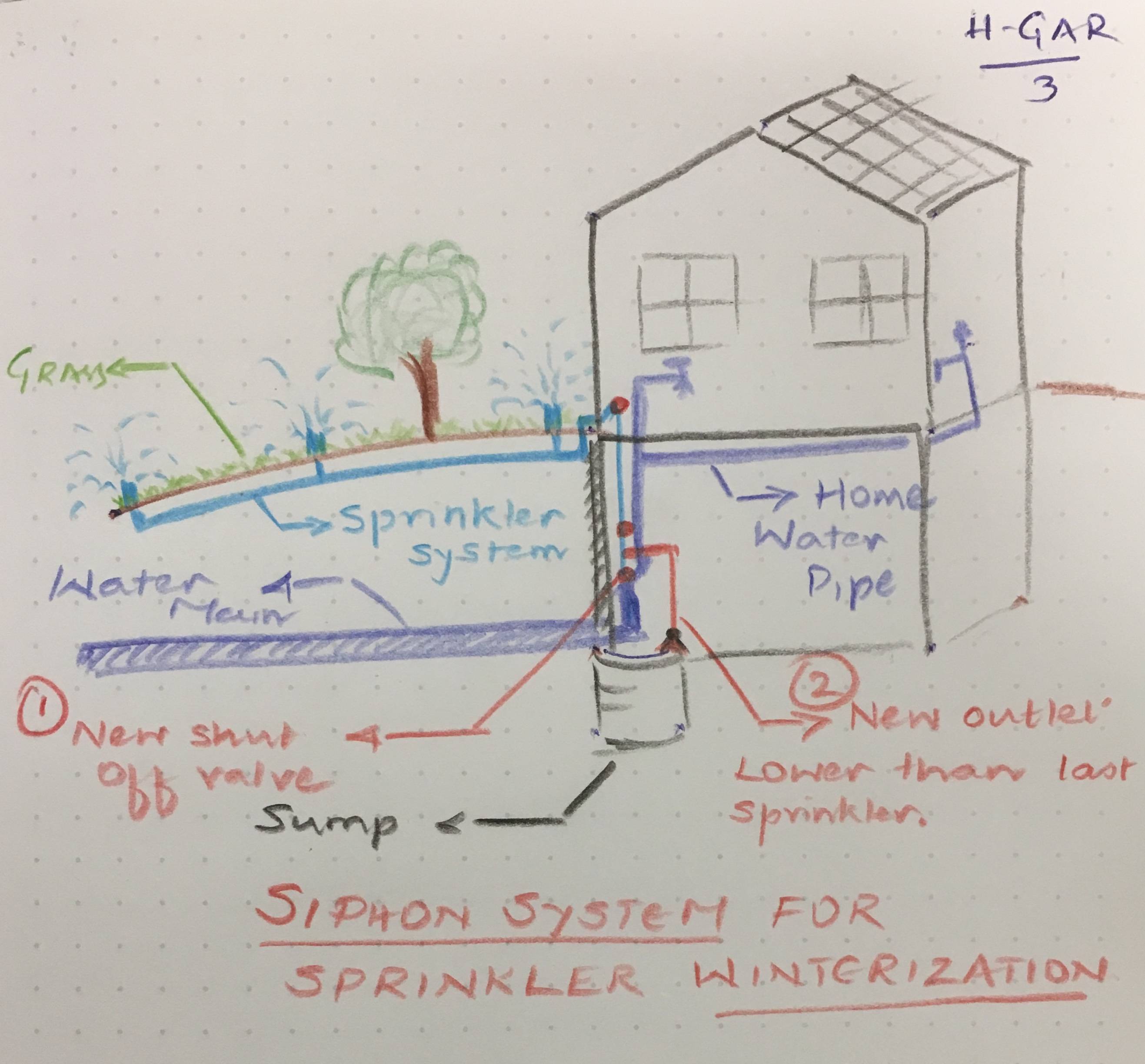 Can I use the siphon to winterize this system if 1. I add a new shutoff valve to open/close the drain pipe. 2. Shut off water to sprinkler and open the drain pipe valve so water can flow via gravity to a sump collector (shown below)

I know this is logical, but is it practically feasible?

It's not a great idea. One big problem is that you'll probably siphon very little of the total volume. If you try and drain multiple zones at once, all of the siphons will break once the shortest zone starts admitting air. If you go one at a time the siphon will probably break once the pipe contains an air/water mix.

The other big problem is that you're likely required to have a backflow preventer separating the irrigation and potable water system. If it has to be outside the building, you're dead in the water. If you already have one outside it's plumbed in at the highest point. There's no guarantee any siphon would be enough to pull water back over the hump even if you remove the valve. Remember, the line from the zones to backflow preventer would be filled with air after the first zone drained, so you'd have quite a lot of empty pipe to the second zone. (Which is probably long enough to just let the water fill the bottom half of the total length and not create a siphon at all.)

Assuming things did work it'd be extremely slow because the heads will remain shut and restrict venting. You'll be creating a vacuum, as opposed to the compressor which adds pressure and pushes the heads open. Even if it was all downhill rather than a siphon you'd be in a gravity vs vacuum fight.

In the absolute best case where you changed everything so it was draining downhill and installed removable caps top vent the ends of each zone you would have succeeded in constructing an efficient method of moving water from the lawn into your basement. That's not going to improve your property value much.

Not the answer you're looking for? Browse other questions tagged sprinkler-system winterizing or ask your own question.

5
Why would a sprinkler Air Valve leak after winterization?
3
Automatic sprinkler valve will not shut off
1
Winterize Sprinkler System
2
Do these pipes need to be winterized? How?
2
How would you winterize this sprinkler system?
1
Is my irrigation system winterized properly?
0
Sprinkler Anti Siphon valve is leaking from cap
0
Which valves should I close when blowing out my sprinklers for the winter?