How do I remove vinyl glue off of tile flooring? 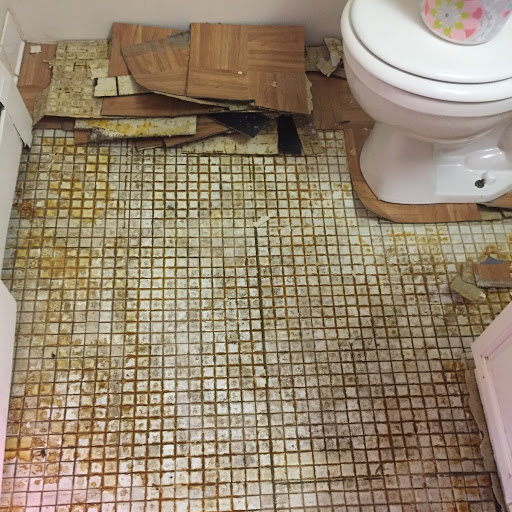 I had a flood in my bathroom and there were two layers of vinyl tile that i ripped up because of water getting underneath. Lo and behold I have a tile floor and the glue from the vinyl is very sticky and I am not sure the best way to remove it. i have tried Goo Gone and that did not work. I have tried a wire brush attachment to a drill and that did not work either.

MEK or methyl Ethel ketone with good ventilation and chemical gloves will dissolve the adhesive, the biggest problem is some residue in the grout. Once the tile is clean a muratic acid solution and water will etch the grout reducing any left over residue. Use a rag that is damp with MEK if you pour it on the adhesive will dissolve and really get into the grout. After etching and cleanup the grout will need to be resealed.

In a similar situation, but with smooth tiles, I used a wall paper steamer to steam the glue and soften it like that, then scrape it off with a putty knife. It was still a terrible job to remove it though, took me an hour per square meter.

In another room I gave up and just broke out the tiles as well, which was much easier. Those tiles you have don't seem to be in a good condition, so removing them might be justified for that reason as well.

Not the answer you're looking for? Browse other questions tagged flooring tile adhesive vinyl or ask your own question.

2
Trouble removing vinyl tile and underlayment from wood flooring
4
How to secure vinyl post caps?
0
Remove hard amber glue from tile and bathtub?
0
Can tile glue for wall tiles contain asbestos?
1
How to put vinyl click-together flooring up against cove base tile?
0
Tiling when some old vinyl sheet flooring is impossible to remove
0
Plank vinyl flooring , the glue will not dry
2
How can I secure vinyl plank flooring that has lifted?
1
Pulling up fiber board to install new tile flooring
2
Vinyl Flooring: Wet glue underneath and pink and black stains on top