Should I be concerned about this roof bubbling?

I have zero experience or knowledge regarding roofs. I love this house and am on the brink of putting in an offer to buy it. The offer would be followed by an inspection (but I'm told these inspections are very basic.. I guess I could pay extra to get a roof inspection if needed). My question is that this house is about 8 years old, and currently the roof looks perfectly fine. However I just found this picture of the house on Google street view from 2012 (when it would have been maybe 2 years old). So as the roof no longer looks like that, I can assume they've fixed it - but my question is if I should be concerned about what they've fixed exactly...(just the shingles or the underlayment as well?), also wondering what may cause this and if it says anything about future concerns for the roof. Any thoughts or suggestions on this are appreciated! 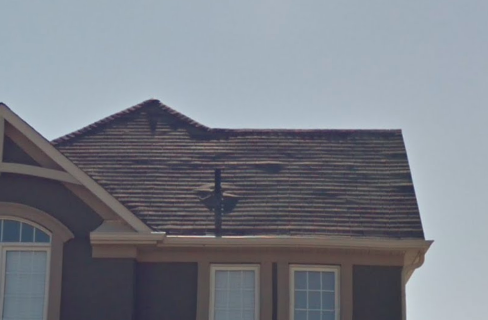 That “bubbling” (we call it blistering) is from a lack of venting.

This is evidenced by 1) blistering in a straight line, 2) blistering around the roof jack at the 3” roof vent, 3) random blistering throughout the roof.

1) Blistering in a straight line is an indication that heat is trying to escape and has found a gap between the roof sheathing.

2) obviously one of the easiest places for heat to escape is around vent pipe holes in the roof. The roof sheathing AND roofing underlayment (moisture barrier) is cut for the pipe to extend up through the roof. This allows heat to escape and affect the shingles. (Notice the shingles are affected all the way around the pipe.)

3) When there are random blisters in the roof this is an indication that the nailing of the shingles in that area is not adequate/correct. Heat is escaping throughout the roof, but it is causing a blister in these locations due to a lack of nails, improper nailing pattern, etc.

I see a ridge vent, but it’s probably not installed correctly. I’d look up in the attic and see if you can see a CONTINUOUS strip of daylight at the ridge. Often roofers will allow the moisture barrier (building paper) to lap over the opening (gap) in the roof sheathing...thus making the ridge vent useless.

The good news is that the roof sheathing is not expanding so much that it’s heaving. That is to say, the roof sheathing was installed with adequate gaps (spacing between sheets) so that when they heat up and expand they do not bulge upwards.

BTW, you’ve lost your guarantee from the roofing manufacturer, because they’ll see the lack of venting.

You can verify the lack of venting by looking around the house and adding up the area of the vents.

The ridge vents are usually about 1” wide and extend the length of the ridge...say 36’. Therefore your ridge vent equals 3 s.f. (Which is within the 40% - 50% range requirement.)

So, now you need to look for soffit vents and / or roof vents. Add them up to see if you have enough venting. I’m guessing you don’t.

Also, vents get covered up by insulation. Get up in the attic and see if you can see daylight coming in all those soffit vents around the perimeter of the house or coming in any of those roof vents. If not, you’ll have to figure out if you can unblock the vents.

BTW, one reason you think the roof looks better now is that this picture was taken at just the right time to show all the shadows. If the sun shines directly on the roof, it will “burn” the shadows out and look great. I’d go back when the sun is lower in the sky.

The ten year old roof of my office looks like that (and worse) when the sun is at a very acute angle behind it. This is due to rippling of the underlayment. Shadows from slight bulges are very long, and this accentuates the impression that the bulges are severe. They may not be.

I'd still have someone who knows roofing take a look to be sure the shingles are securely fastened, but it may not be a serious concern.

3
Which kind of roof coating to use to treat low pitch mod bit roof?
0
How should the top edge of an asphalt shed-type roof be finished?
3
New roof sagging
2
Fact-check on metal roof quote by roofing company
3
Should I Add More Static Vents On My Roof
1
Does age of asphalt shingles affect their resistance to hail damage?