Code: How can a transfer switch not switch neutrals?

I'm looking at this Reliance Controls transfer switch. I certainly won't buy it and don't recommend one, but the huge hank of wires going from switch to panel only has one neutral wire in it. 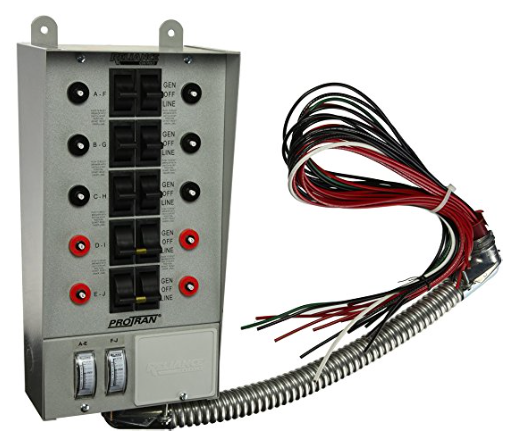 How is this legal under NEC?

Now first I see where the conduit is less than 2 feet, so they don't have a conduit-fill derate on those wires. OK, I buy that.

The generator power comes into this box. There are 10 blacks and 10 reds, 2 wires per circuit switched, so obviously for each circuit, "line" goes to the utility-side breaker and "load" goes to the branch circuit "hot". In utility mode power is taken from "line" and sent to the circuit on "load". In generator mode, power is taken off the generator, sent to the circuit on "load" and returned via that one single neutral.

But it's obvious neutral is not being switched at all. All generator imbalance load for all circuits gets carried on that single white wire.

How can that be NEC legal? Is there a section of NEC that authorizes this style of use?

How well will this work with AFCI and GFCI breakers?

TL;DR: The lack of a switched neutral here has effects on other parts of the system

The presence of a single neutral wire here (which is carrying generator imbalance and providing a 0V point for the wattmeters) means that the generator is relying on the neutral bond in the panel, instead of providing its own. This is important because many portable generators actually come with a neutral bond installed by default (and would need their bond removed to work properly with this transfer switch). Read on for details.

It means your generator is not a separately derived system

Most hardwired generators can be set up either way and left that way without too much difficulty; however, portable generators are pretty much always shipped with their own neutral-to-ground bonding point installed, so they can be safely used as a standalone source of power. Some generator manufacturers provide instructions for pulling that bond for use as a standby generator in a non-separately-derived system, but that means that the bond has to be reinstalled if you ever wish to use that generator for portable power.

But, this fact has ramifications downstream

However, this is not without consequences elsewhere as well. Many interlocked-breaker feeder-type and all select circuit manual transfer switches, as well as panelboard-type breaker interlock setups, do not provide the extra pole needed to switch the neutral between the two bonding points present in a separately derived standby system, limiting their use to non-separately-derived standby systems. On the other hand, double throw safety switches can be readily obtained with the extra pole necessary to switch the neutral; there are interlocked-breaker manual transfer switches with a switched neutral as well, such as the Reliance Panel/Link X series and the Eaton CHGEN series. If you have an automatic transfer switch, note that residential-grade ATSes almost never have a neutral pole of any sort; commercial-grade units are available with a switched neutral pole, but are generally not seen in anything on-topic for this site.

Furthermore, in a non-separately-derived system, all ground and arc fault protection must be downstream of the transfer switch. This is problematic both at small scales, as some portable generators provide ground-fault protection on both their branch-circuit and their power receptacles and also because it means that ground and arc fault breakers have to be shuffled to a standby subpanel from the panel supplying the utility feeders (or can't be used at all in the case of a select circuit transfer switch), and at large scales, where it interferes with feeder/service equipment ground fault protection on high-current, three-phase, wye-connected feeders and services.

Update on my answer: the neutral is rated for the maximum load permitted by the device. In which case this device has a certain Inlet where it may be 30 amp Max. When the neutral is properly balanced it will have very little current on it.

Not the answer you're looking for? Browse other questions tagged electrical-panel code-compliance or ask your own question.

1
Can a cord and plug attached to a wallbox be used as a transfer means for fixed wiring downstream of the box?
3
Possible neutral problem - Utility side vs. Load Side?
1
How can I move the neutral-ground bond to my house from the pole?
1
Add sub panel from transfer switch
1
IBT and whole house transfer switch
10
New house generator AC breaker tripping
0
7500 Watt Manual Transfer Switch has #10 wires, but my well pump is wired with #8
2
Install manual generator transfer switch to two 200A feeders
2
Four transfer switches do not seem sufficient to control numerous appliances through 120v panel breakers
2
Does this 3-Way Wiring Violate 300.3(b)?