My question is: how would I be able to cut out the 2" cube in the 4" wood post so that the 2" rail fits nice and flush in the wood post? What tools would I need and is it something that a novice wood DIY guy could do? 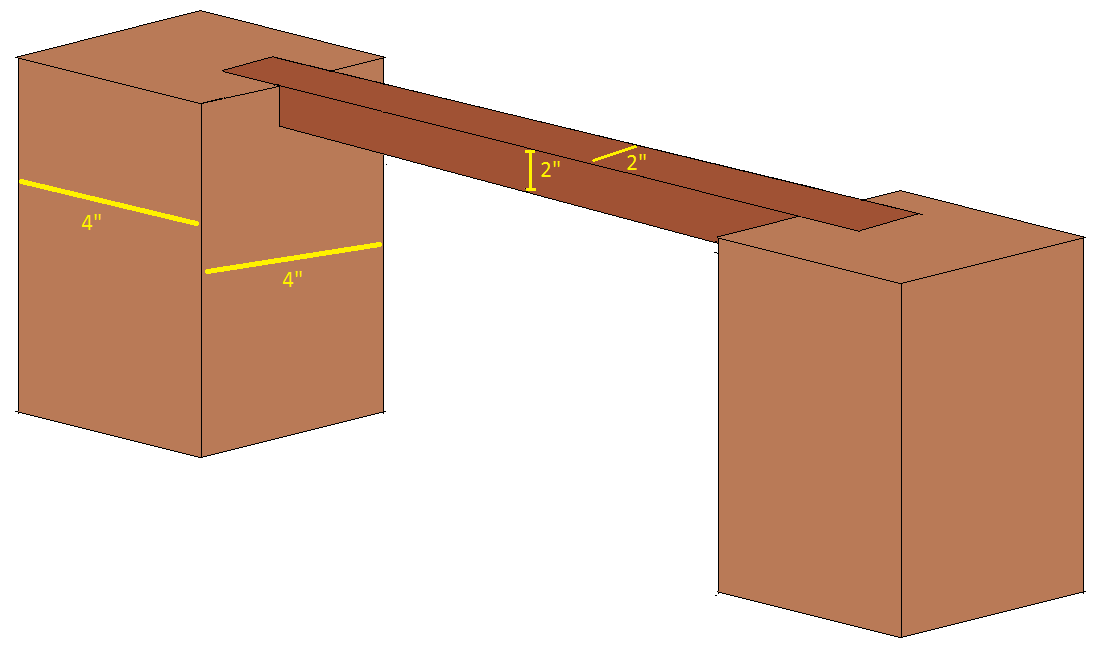 You could rough it out with a drill, maybe a router. Then tidy up the corners and edges with a chisel and mallet.

You could use a saw to establish the edges, then finish off with chisel and mallet.

Given that people such as Paul Sellers routinely cut blind mortices remarkably quickly using only a chisel and hammer, this could certainly be done that way too.

Put glue in the notch and on the end of the 2x2.

You can not do it freehand with a router. You could do it with a utility knife and chisel, but adding a saw and drill will make things a bit more foolproof. Remember that everything will be out of square, so make the rough opening undersized and trim to fit. (If looking good from above is the primary concern consider tapering the ends of the rails a couple of degrees so that the bottom is slightly narrower than the top. That hides any imperfections in fit.)

One you have the cube marked out on the post, drill two holes on the long grain side tangential to the lower corners. That will allow you to cut the sides with a dovetail or back saw, the toe of the saw moves back and forth in the hole. That will give you the cleanest edges, cutting the fibers with a utility knife and straightedge is quicker but rougher.)

With the edges cut place a chisel (1" is good size) on the face about a quarter inch below the top of the post and strike it sharply to sever the wood fibers. Once you have a piece cute on three sides (2 saw cuts, 1 chiseled line across) place the chisel on the top of the post at the same depth (Or slightly shallower) as your first chisel cut. Strike the chisel again to split the wood along the grain down to the cut and voila, you've removed a little piece of the cube.

Repeat the process, cutting the end of the split then splitting along the grain to enlarge the hole. As you go you'll get a better idea how big of a bite you can take without making a mess. As you get close to finished you'll want to stop with the mallet and push the chisel along the bottom and inside edge by hand, paring them down flat.

Within reason, the diameter of the router bit won't matter much, except that a thinner bit:

Because of that, the thinner the bit, the longer it will take to make all the cuts, and the more the cutting speed will effect the accuracy of the cut.

Depending on the hardness of the wood, and the various cutting factors (bit hardness, sharpness, and diameter, router spindle speed, cutting feed-speed, cutting depth), you may need to make several cuts, starting with a shallow cut then increasing the cut-depth until you reach the final depth.

The larger radius created by the larger diameter bit is not relevant, because the radius material will be (mostly) cut away when the router is turned 90-degrees to cut from the other face.

For example, when you make the cut (basically a square-U) with the base of the router against the end of the 4x4, it will leave a radius (inside) for the full 2-inch depth at each of the 2 corners (turning points) of the "U". If you use a larger diameter router bit, this radius will be larger. But, the bottom (the deepest part) of the cut will be square, with no radius along the full cut.

Then, when you turn the router 90-degrees, to make the same (square-U) cut with the base of the router against the the side of the 4x4, the cut at the bottom will remove the radius that was left along the depth of the first cut.

The only thing that will remain is, at the bottom, at the 2 spots (inside corners) where the 3 cut faces meet, there will be some material that needs to be removed. You could handle that in (at least) 4 ways:

I'd say the best choices are #3 or #4. Some may say they're a "hack", but they're probably the easier and quicker ones and perhaps less error prone. I'd probably go with #3.

This could be done with a router, by marking or scribing the cut lines, then cutting "freehand", but if the accuracy and finish of the final fit are very important to you, the use of a table mounted router with fences, or well constructed custom jigs/fixtures are recommended. Also, it would probably be helpful to do a trial run with scrap lumber first, to familiarize yourself with the process. And as always, measure twice, cut once.

Not the answer you're looking for? Browse other questions tagged wood fence post or ask your own question.

1
What cut of wood should I use for door stile & rails?
2
How do I cut a beveled fence post cap on already installed fence posts?
2
build 6x6 single post from 2x4s for swingset?
2
Refilling extra space between rail and posts for inserting screws?
0
Cedar wood strong enough for hinge?
2
What wood joint can I use to connect railing members over a post?
2
Can I cut a piece of newel post base sticking out of slanted ceiling?
2
Concrete post base wood too tight
0
Attach 2x4 to a warping 2x4 wood rail?
0
How deep of a notch can I cut into fence post?