What do the numbers on a cordless drill mean?

I have a Hitachi cordless drill: 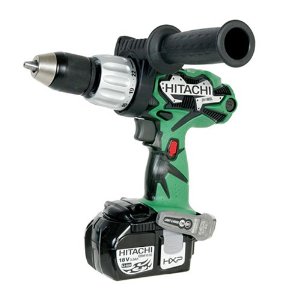 You can turn the gray numbered part to switch between, hammer drill, drill and screwdriver mode. The screwdriver mode is numbered up to 22. Can someone explain what the different numbers mean? I haven't really noticed a difference between them.

When the drill is used as a screwdriver, the numbers indicate the torque breaking point. Higher numbers mean more torque. By breaking point, I mean the point at which torque is no longer applied.

This feature is useful because you can limit the amount of torque that is applied to prevent screws, or the materials they are inserted in, from being stripped. When the screw is in all the way, you want the torque to stop.

When you use the drill as a drill, as opposed to a screwdriver, you set the number to the highest setting, In most drills that setting will be indicated by a picture of a drill bit rather than a number. It will be after the highest number. Some drills may also have a picture of a hammer. This indicates it has a percussive hammer action as well as drill mode.

8
What units are the clutch settings on a drill?
5
Should the hammer function "feel" different from normal drilling function on a hammer drill?
3
How can I repair the chuck on my cordless drill?
6
Will I damage a cordless drill/screwdriver if I "over-torque" it?
0
Why is my Bosch drill working intermittently?
2
Want to know how hex bit shank works and the history behind it's design
0
Can a simple cordless screwdriver have neither a clutch nor a variable speed?
0
What kind of drill bit will go through both concrete and wood to sink concrete anchors through the sill plate?