Installing a sub panel to a GE split bus panel

I would use 30 A and two 40 A compact 2-pole breakers for the dryer, a/c condensing unit, and the range. I would use the existing 50 A breaker on the top right for the sub panel, unless I should go larger. 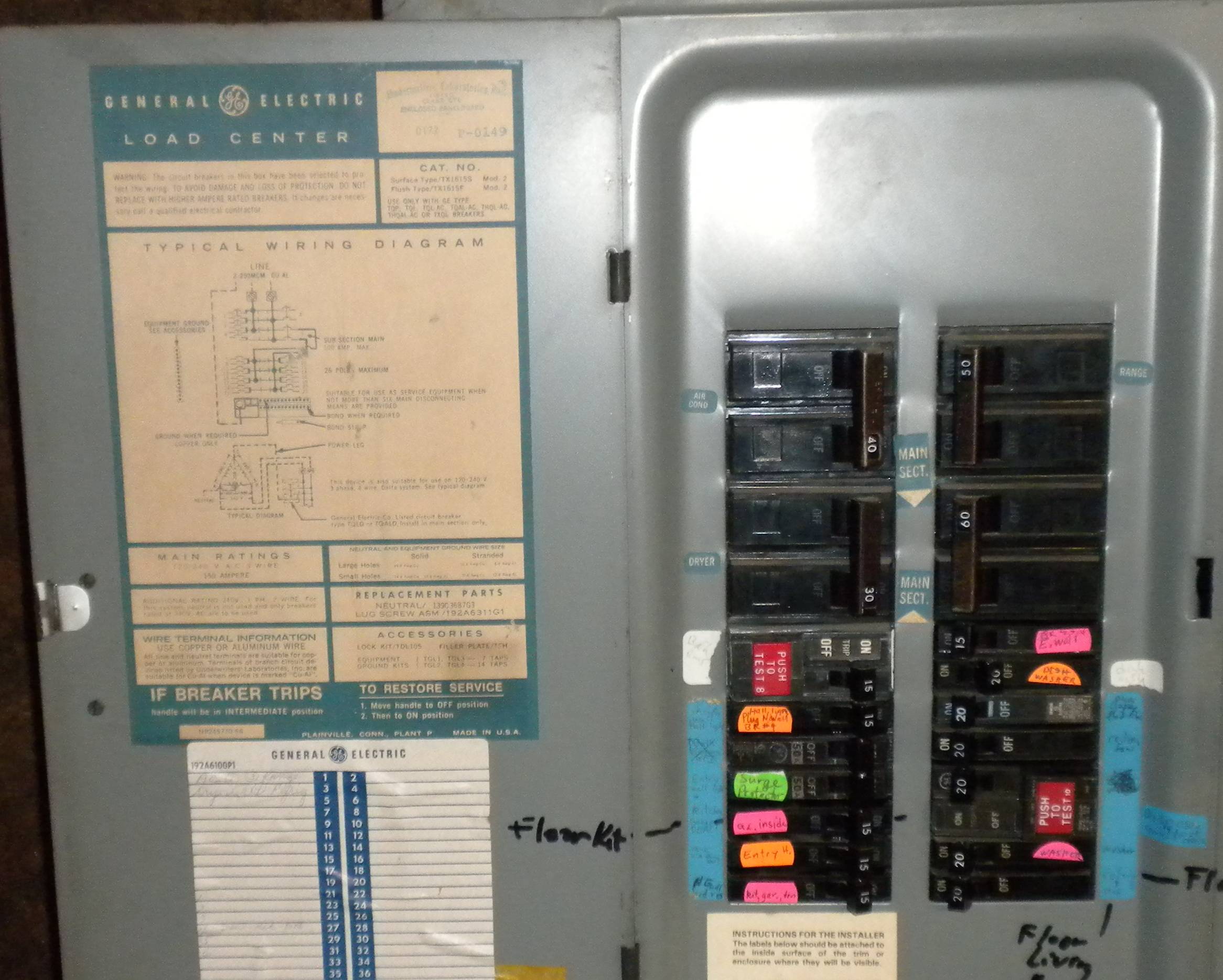 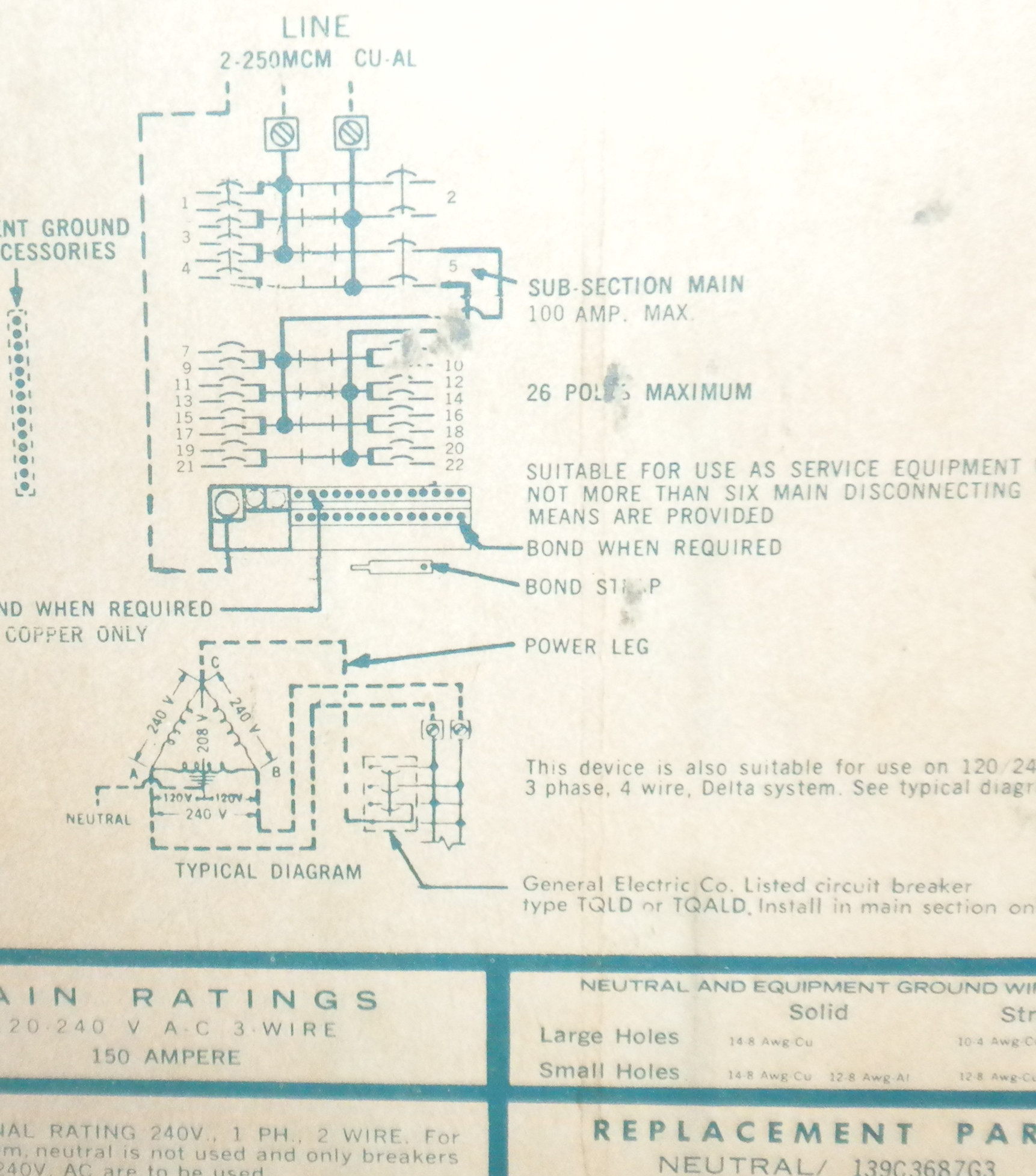 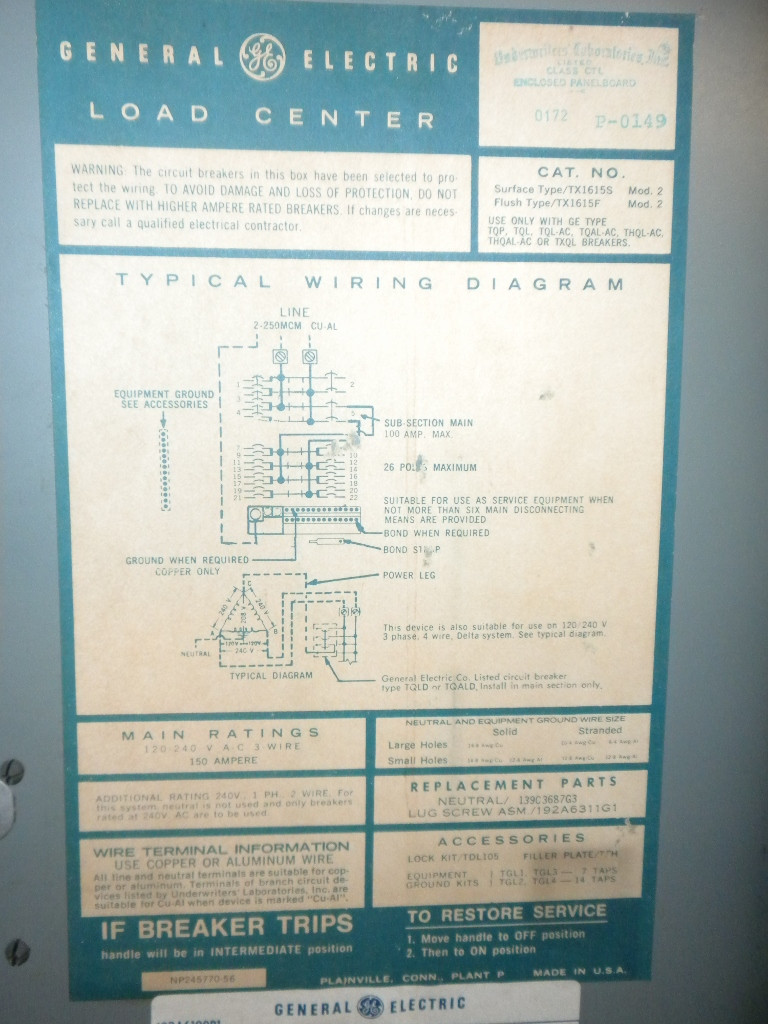 EDIT On the right from top the 120 V branch circuits are: 15 A -- bdrm 2,3,4 E. wall receptacles, 2 closets single bulbs, 20 A (switched off) for dishwasher but not installed, 20 A garage receptacle, lights, door opener, 20 A ceiling fans, lights, 20 A GFCI kitchen counter, 20 A clothes washer, 20 A refrigerator and 1 kitchen receptacle not near sink

No one has posted an answer for this question, so I thought I would take a stab at it and remember some of it is more about code intent rather than written law.

First, you have a split bus panel. This panel was developed because of a loophole in the early code that stated you could have 6 means of disconnect to disconnect totally from a service (the 6 disconnect rule). So manufacturers decided that instead of paying for an expensive(?) main breaker, they would instead create a panel with six means of disconnects, diversifying the load and using lower priced smaller breaker for disconnecting purposes. Like I said it was a loophole, which was caught by the NEC and then immediately corrected. That is why there is a very small time line where these panels were used, because they are now illegal.

Now that you have a brief history let's get to your question. You panel was installed when it was legal to do so, and it can stay that way under the grandfather clause. Since it was a generic panel, the installer could have used all of its capacity (6 disconnects) but didn't. You now want to upgrade your panel to its full capacity by adding breakers.

Now here is where the intent of the code affects the answer. When you remove and add breakers to this panel, you are modifying a panel. When you modify a panel you must bring it up to the updated code and if you can't do that with the existing panel, you should replace it. In other words the panel was installed during a time where it was legal to do so, but you can't "grandfather" in an upgrade.

Now I know this could be a big discussion and a lot of it depends on each persons interpretation of the NEC. I will say it really doesn't matter what any ones opinion is, including mine. The only one who's opinion and interpretation counts is the AHJ. That is what they are there for, and that is what they do. Most people hesitate to go the the AHJ because they fear they will rule without considering cost or other installation problems, and they will probably want to inspect the work after it is done. Then again that'is what they are paid to do.

While you technically could do what you describe

While what you describe is possible with suitable THQP2xx breakers and a couple of half-width filler plates...

split-bus panels are a pain in the rump, as they can't be brought up to modern standards. Yours likely does not support the THQLRK or TQDLRK required for conversion to a backfed main breaker configuration (I finally spoke with a human being at GEIS/ABB about this, and they couldn't say definitively, but were skeptical of the panel accepting a backfed main retainer), and you are two slots short of the space required to wrangle a TQDL21150 into your panel without bumping a circuit off to the subpanel, even with tapping the feeder to the sub off using the main lugs of the panel.

Replacing it with a modern panel would be the best move should you desire more from your electrical service -- make sure you don't short yourself on breaker spaces ever again, though! (A 54 or 60 space panel is by no means out of place here.)

The Code does not address using a split bus load center to feed another panel board. The 2017 NEC is silent on this application.

Not the answer you're looking for? Browse other questions tagged electrical-panel subpanel or ask your own question.

2
Power loss on a sub-panel
6
What size cable do I need for a replacement sub-panel?
1
Loads for sub panels from 150A split-bus main panel
1
Big Problem: buried feed to outbuilding sub-panel. Not really buried
0
Best choice for sub-panel and circuits for basement
2
Should I make space for a new 50A breaker in a full panel or install a sub-panel?
1
Adding sub panel, odd main panel configuration
2
What size sub-panel and wire do I need for my three-season room?
1
mini sub panel?