In Seattle in the US, I currently have a 24" tall split bus 200A electrical panel and I'd like to upgrade to a 36" panel for more capacity and to get main breaker. Unfortunately the laundry sink (you can see the lip of the sink in my photo) vent pipe runs below the panel and can't be lowered much since it's barely 6" above the flood line. What's my best option here? 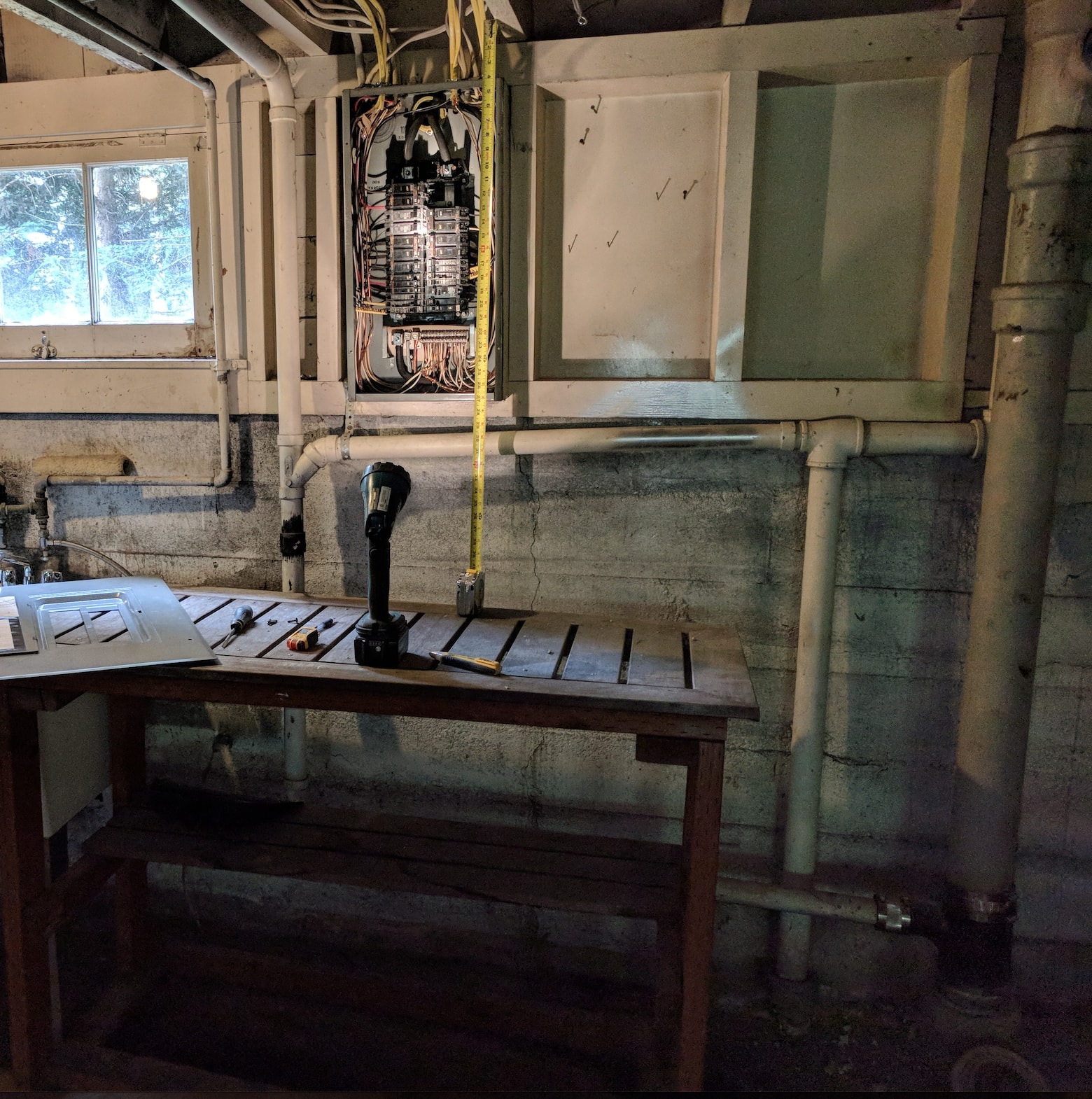 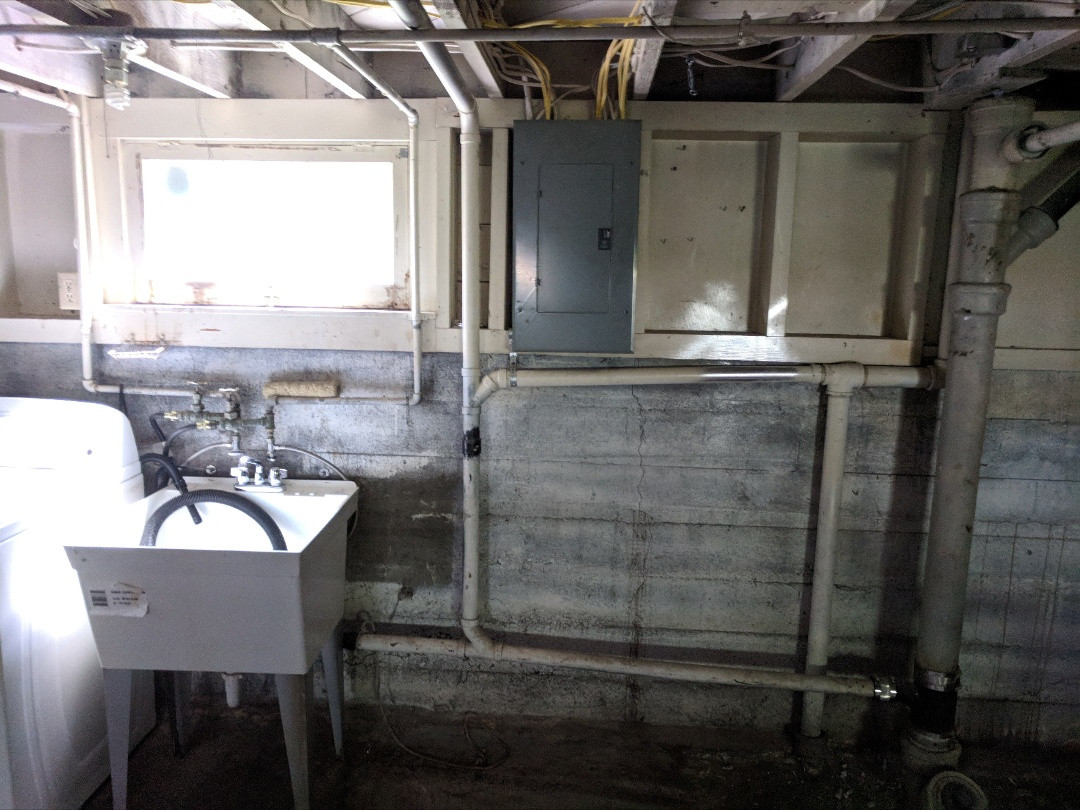 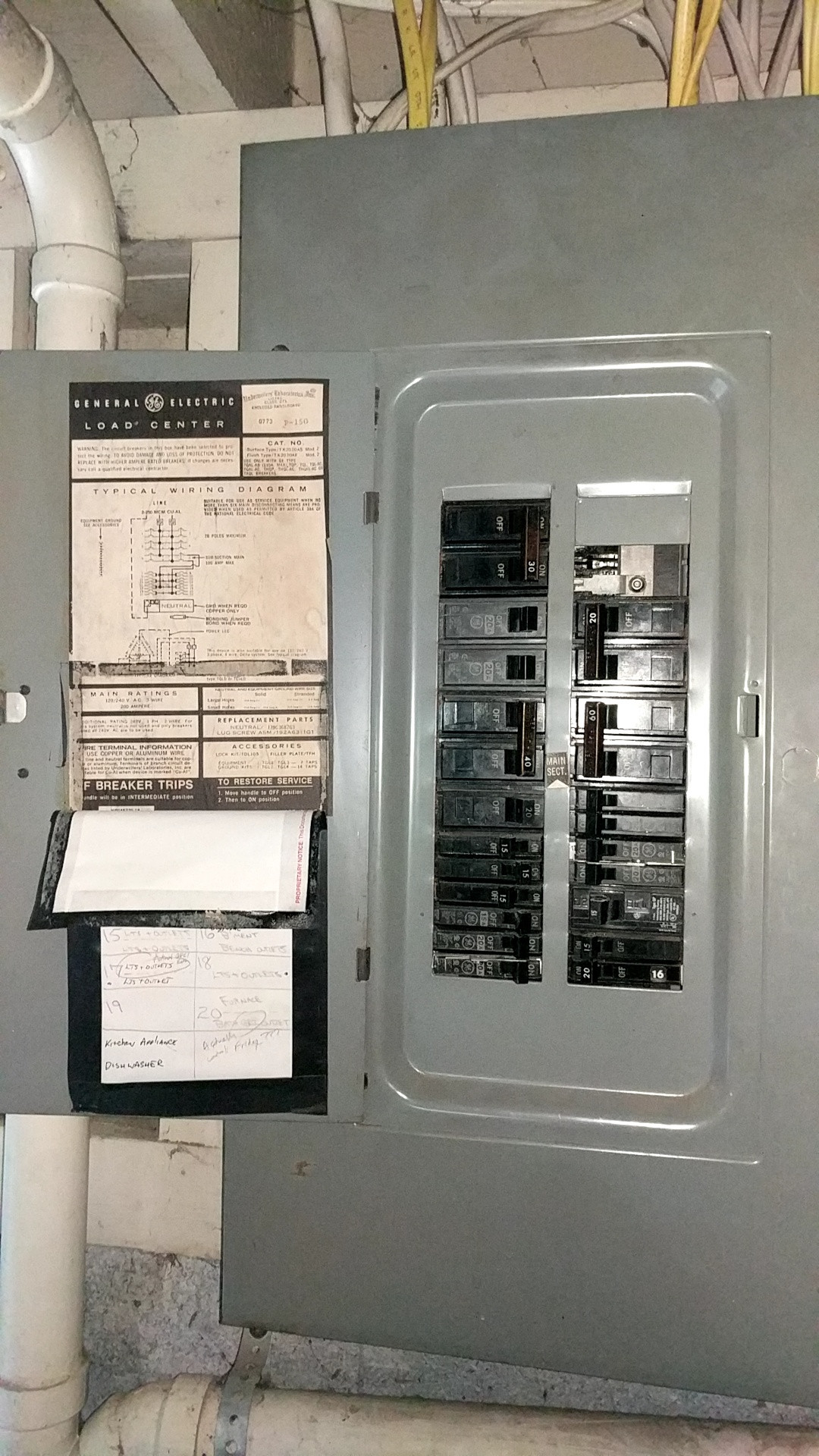 Thanks for the advice!

I would go with a variation on option 2

I would notch two pieces of 2x6 pressure-treated dimensional lumber to accommodate the plumbing (vent and waste), then stand them on a 2x6 pressure-treated sill lagged to the floor with the "studs" 16" apart O.C. From there, you can then install 2x6 blocking (top blocking on edge, bottom blocking on the flat) between the bump-out "studs" and surface mount the new panel to the blocking members, thus placing the vent and waste lines outside of the 110.26(A) clear working space.

If this "mini-wall" proves impractical, there's also the option of using angle brackets and tie plates (Strong-Tie type ML angle and type TP tie plate, or equivalent) to mount notched 2x6 side blocking on edge to the existing studwork and boards for at least 48" from where the top blocking goes, and then mount the top and bottom blocking boards as specified below.

As to your new panel, I would set the bottom blocking member to accommodate a 43" to 48.5" high box -- this provides room for a 54 or 60 space loadcenter, depending on whose loadcenters you go with (Siemens has a 54 space option that is reasonably priced, while Eaton offers 60 spaces in both their BR and CH lines, and Square D offers both 54 and 60 spaces in QO and a 60 space option in Homeline as well).

As to why a subpanel is probably unwise

(D) Back-Fed Devices. Plug-in-type overcurrent protection devices or plug-in type main lug assemblies that are backfed and used to terminate field-installed ungrounded supply conductors shall be secured in place by an additional fastener that requires other than a pull to release the device from the mounting means on the panel.

Double the loadcenters, double the fun

Adding an extra "stud" or side-blocking member to the support configuration would provide space adjacent to the replacement load center for an additional loadcenter. This could be connected in a "daisy chain" fashion, using a subfeed lug block in the first loadcenter, jumpered using fat wires to the main lugs on a second loadcenter, or as a traditional subpanel.

I would go with option 5 and maybe combined with option 2. First I would get rid of the split bus panel (They are no longer legal for a reason). Second I would install a two or even three section panel. This are not sub-panels the first panel has an MCB and then the other panels are lugged from bus to bus with a full size conductor.

You will be able to find these from a wholesaler as they are not a stock item.

Not the answer you're looking for? Browse other questions tagged electrical plumbing electrical-panel or ask your own question.

2
Can I move a drain without moving the vent too?
0
Extending plumbing vent horizontally
2
Should I make space for a new 50A breaker in a full panel or install a sub-panel?
1
Looking for NEC reference on resizing main panel that will feed a new panel for 2nd unit
1
Can I run PEX water lines/PVC drain pipe in "warm" side of insulated exterior wall?
4
Can I replace a 100A meter panel with a 200A meter panel **before** replacing the load center?