How should I compute the clear span of a purlin in a roofing system?

My house employs purlins to support the roofing rafters. (this video explains almost perfectly what I have in the house). There are two purlins, about 6 feet from each other and the top ridge of the roof. The purlins are 2x8 and are supported by struts at various points.

One of the purlins is in the way of a potential attic access. I keep bumping my head on it. I'd like to move it a foot or maybe 16" away from the other purlin and closer to the wall supporting the rafters. This purlin spans over a room for about 11 feet. At one end it is connected to an exterior wall, at the other end a strut (as depicted in the video).

Ok.. the question: What is the formula/table required that determines the appropriate span and spacing for the purlins? I'd like to use that to figure out how much flexibility there is in relocating the purlin up or down the rafters or replacing the one purlin with two purlins that split the difference.

Update: Some measurements (rounded): The rafters are supporting a single layer of 50-year asphalt roofing. From the ridge to the exterior supporting wall, rafters measure 203 inches. From the ridge to the first purlin measures 25" oc From the first purlin to the second purlin measures 65" oc From the second purlin to the exterior wall is 114" oc Both purlins are independently supported. At the exterior wall, a 2x4 support nailed to 2 2x4 studs that rest upon the top plate of the exterior wall, the purlins rest on the 2x4 in both cases (to be clear, not the same 2x4!) Approximately 11 feet away is the next support, attached to the top plate of an interior wall using a 2x4 strut exactly as represented in the video. Roof is a 4 / 12 pitch roof. The entire structure is on a concrete slab. 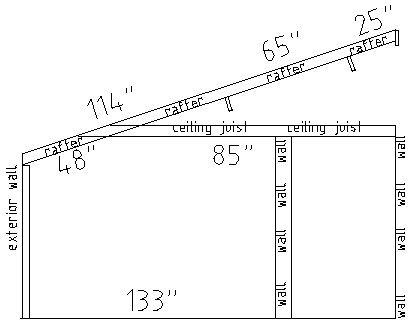 You’re thinking of the “tributary area” on a beam.

Just take half the distance to the next support and that is your “load” (live and dead load) on the beam. They don’t have to be uniformly spaced.

Not the answer you're looking for? Browse other questions tagged roof structure or ask your own question.

6
Does this 2x4 support my gable ridge?
2
How can I build a temporary support for rafters?
4
How do I correctly install metal roofing over a workshop with a vaulted/exposed ceiling
1
Span of roof rafters, how to fix improper structure
1
Rafter load capacity
0
Convert timber roof rafters to trusses?