Bathroom Light Fixture with no stud or box

I uninstalled my old bathroom light fixture to replace it with a nicer light but found that there is no stud and no wall box behind the sheet rock. The old light fixture is very light but the new one is not. Is it safe to attach the new light fixture without studs or wall box to attach it to? Would it be safe to just use wall anchors or do I need to hire a professional for this job? 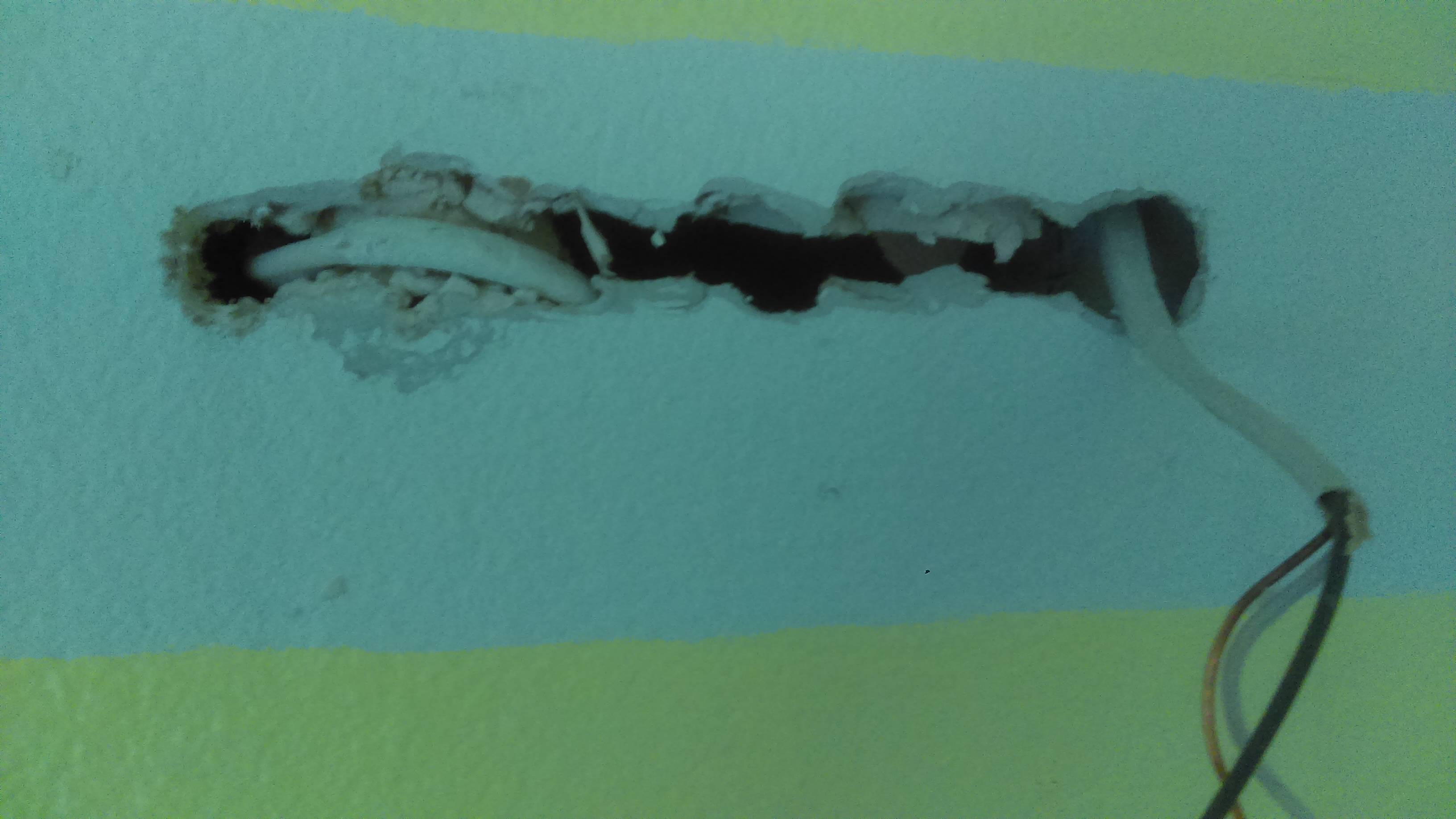 I found almost that exact same image behind a bathroom vanity light fixture that I took down to replace. Needless to say I was flabbergasted that such garbage workmanship would be hidden behind a fixture.

You should look very closely at what is just behind the place where the romex cable is coming out one hole and reentering the wall cavity at the slot on the right.

Mine looked exactly like that and there was a stud right behind that cable loop.

I opened up a hole to the right of the stud for a suitable metal electrical box. I then drilled a hole through the center line of the stud from side to side and worked the wire through the hole. I then mounted the electrical box to the side of the stud and brought the electrical cable into the box and secured it with the box clamp at the rear of the box. Now it is properly wired but I had to work at finding the proper lighting fixture that would cover up the messy slot in the drywall. (I would have patched and painted it but decided to wait till I give this bathroom a facelift remodel in the near future.

That's terrible. Whoever did the work did very shabby and unsafe work, and you may have a house full of that.

One option is an "old work" (meaning retrofit) junction box that attaches directly to Drywall, however drywall is basically schoolhouse chalk wrapped in paper soaked in glue, you don't expect it to have any strength. It's a basically useless material except for being cheap, holding up paint and being an absolutely fantastic firestop.

A better option is an "old work" lamp or fan box, which has a built-in metal cross-arm. The cross-arm fits through a sensibly sized junction box hole, but telescopes out 15" so it can bite into the nearest ceiling joists. That is how it carries the weight of a heavy light or the dynamic vibration of a fan. Then the junction box proper is able to clip onto that cross-arm at any needed position. They are quite clever.

I worked as an electrician for a few years. Normally it depends on the light fixture you are mounting. The reason why we just stub a wire out is vanity placement. Sometimes we cant get a box mounted in for a few reasons. Plumbing vent stacks, stud placement, and round cut in boxes(old work) will show around the fixture. If the builder placed a nailer for a round nail on box to be used then its great. Normally they dont. We just use a fixture designed for the wire to be spliced inside of it, and use a romex connector. Then we can center it on whatever vanity it's going over. A plastic box supports weight of the fixture. Its max is 25lbs. I believe a single gang nail-on is 9lbs. Weight shouldn't be a problem. Agreed they should of drilled through the stud and slid the wire through it or at least protected it. I agree it looks shoddy but if a licensed electrician did that they he had a bad day and the wrong light fixture was purchased by the homeowner and not correlated with builder/plumber/electrical contractor for box placement. I hope this clarifies the shoddy look. BTW metal studs require a bushing be placed in the pre-cut holes to keep the wire from chaffing.

What you want is called an "old work" box, a type which is designed to be installed into a finished wall from the living space side. Normally you'd get the round one for a light fixture (rectangular boxes are for switches or receptacles) because this will have holes spaced for attaching the light fixture. But look at your light fixture and see what it requires.

Decide where you want the box and carefully pencil an outline for the opening. It is important to cut the opening precisely according to the instructions for the box because if it is too large the box will not clamp securely to the drywall. Before cutting out the opening stop and consider if you have the hole drawn right.

Cut out the opening with a hand drywall saw, being careful to avoid the wire. To better control the cutting you may want to wrap a rag around the blade, exposing only a couple of inches of the end. Using the rag as a hand grip make short strokes and cut carefully.

Once you have the opening cut look inside with a flashlight. You should be able to work the electrical cable through an opening in the metal stud and bring it out the opening you have cut. I think there will be existing openings in the metal stud. At this point you ideally should patch the drywall so the opening is complete all around. If one of the clamping tabs of the box would fall on the repaired section of drywall, you will have to take care to make the repair sturdy, but it will be hidden by the base of the light fixture so it doesn't have to have a finished look. Any part not covered by the fixture could be sanded and finished later.

Pull the end of the electrical cable out of the opening and pass it into the box with enough extra wire so that when the box is inserted in the opening there will be 5 or 6 inches of wire out past the finished wall. Examine the box and the fixture and determine if the box must be in a particular orientation so that the fixture is oriented level on the wall. (The fixture may have a mounting mechanism which makes orientation of the box irrelevant. If so, you could orient the box so that the clamping ears are not on your repaired drywall.) Only now push the box into the opening and secure the clamps.

Decide on a location for the box. I have never worked with metal studs. There may be a clamp or attaching system which allows a box to be fastened to a metal stud. Use the box or a paper template that comes with it to draw an outline on the drywall for the opening you will cut with a drywall saw. Cut the hole and make sure the box fits (but of course do not install it yet).

Do you have a cordless electric drill? If not, borrow or buy one. You now want to reroute the electric cable through the metal stud. There should be a hole already but if not you will have to drill one about 1/2 inch in diameter. You may have to buy a rubber or plastic grommet to pop into the hole to prevent chafing or cutting of the electric cable. Work the cable through the metal stud and out the hole for the box.

Now repair the hole so that the borders of the hole are strong enough to support the box and the weight of the fixture when it is attached. If the box is to be attached to the metal stud, then this will be stronger, but it may be that the desired location for the box will be father to the right and if so it will be important to properly repair the wall board on the side adjacent to the stud and on the other side.

Adding a box with no studs

I wanted to add an electrical box between two studs and not up against one, so none of these approaches worked for me. I found this YouTube video by Jon Eakes though:

His approach is to

In the comments below the video he says that should hold a 15 pound fixture with no issues.

Not the answer you're looking for? Browse other questions tagged bathroom light bathroom-fixtures or ask your own question.