I have a chainsaw that won't start and I'm not particularly good at diagnosing the problem. I had something happen like this about four months ago. I drained the tank, put in fresh gas and it was fine. This time, I've put in fresh gas, changed the sparkplug, cleaned the carburator and replaced all the gaskets and still it does not start. Rarely do I ever hear a spark catch. Usually the chainsaw sounds like this:

The cylinder does get flooded with gas after a few start attempts so I doubt it's a primary fuel filter problem. Have some filters on order and will try changing them in the future. But I did take the filter out and it seems to pass fuel just fine.

Generally this is a lightly-used chainsaw. There's roughly only two times a year I put this saw to use, otherwise it sits idle much of the time. It's almost three years old and this is the first time I've had real trouble getting it to start. 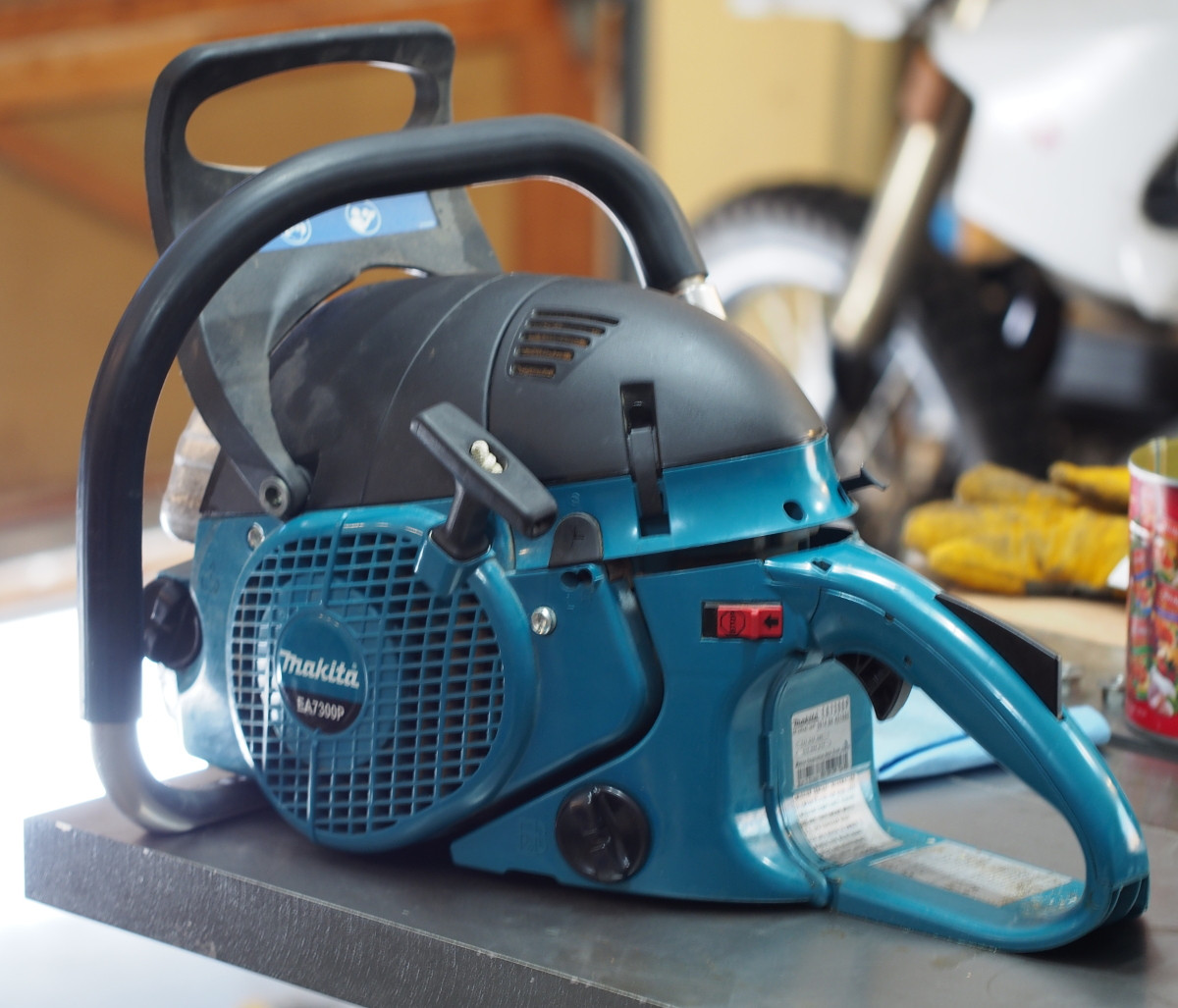 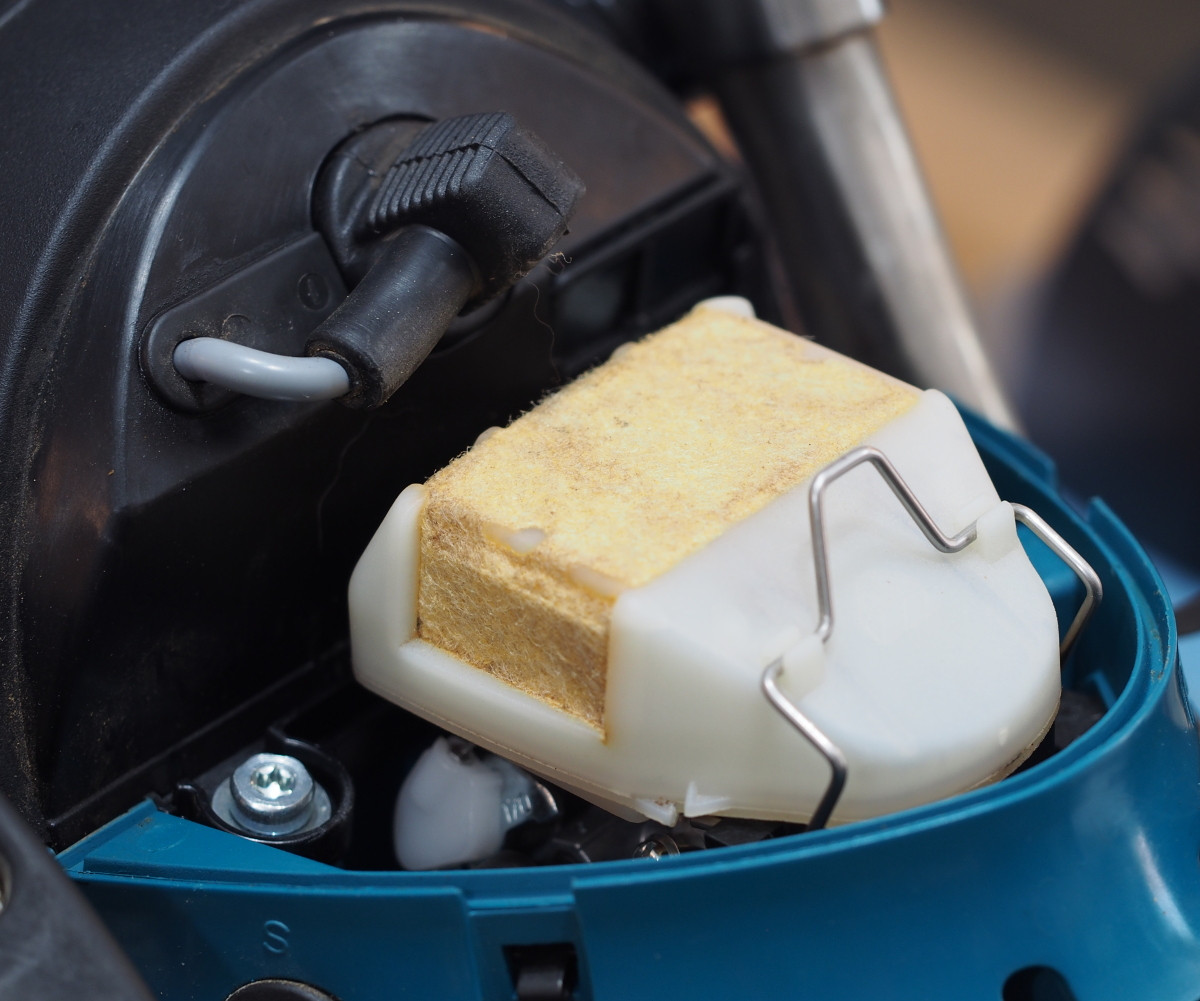 Carburator in the saw. 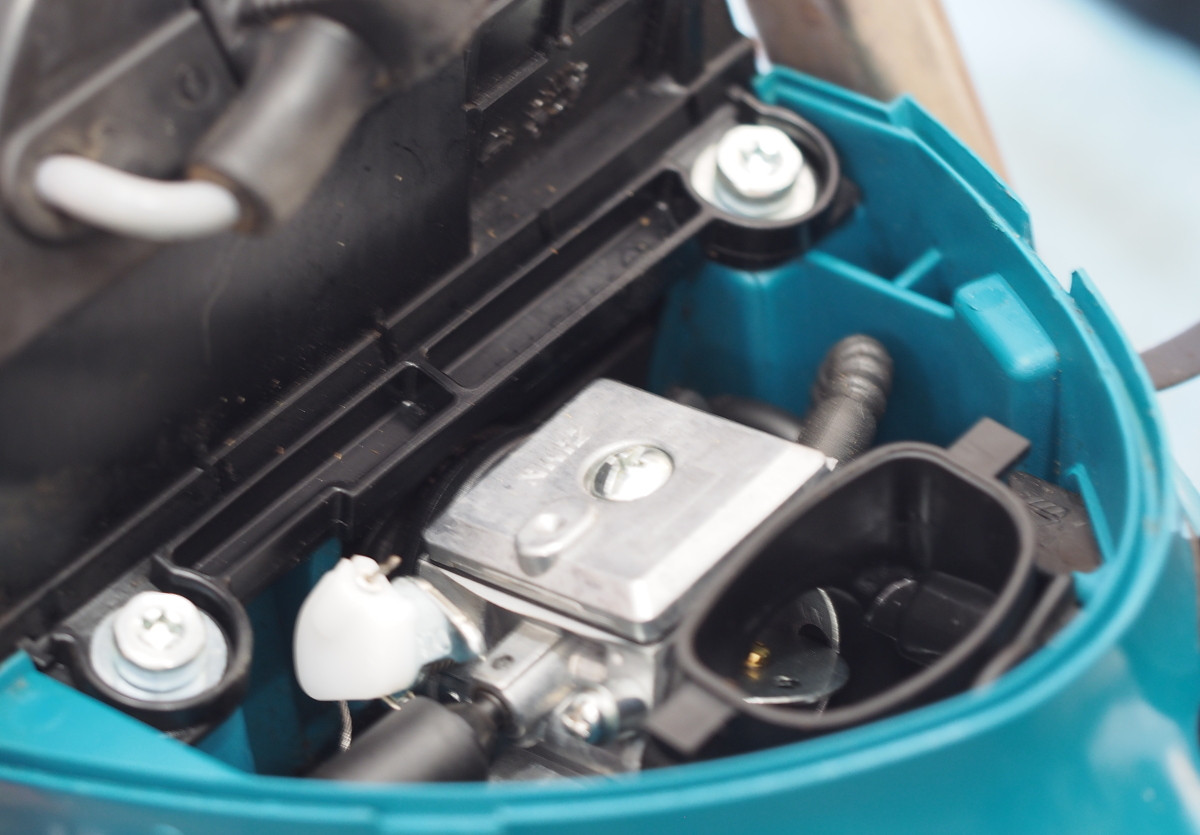 Carburator out of the saw. 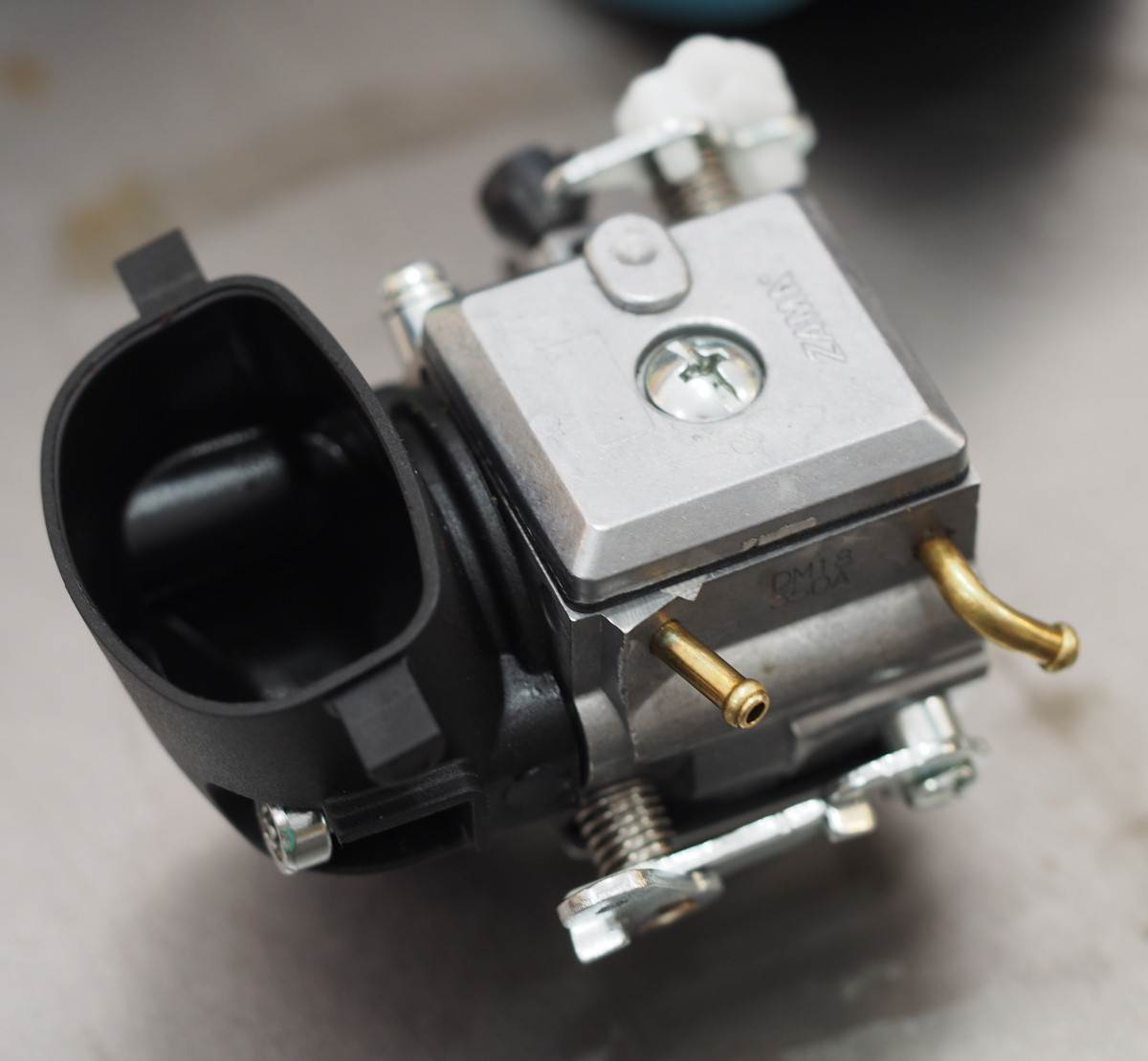 Sparkplug out of the saw. 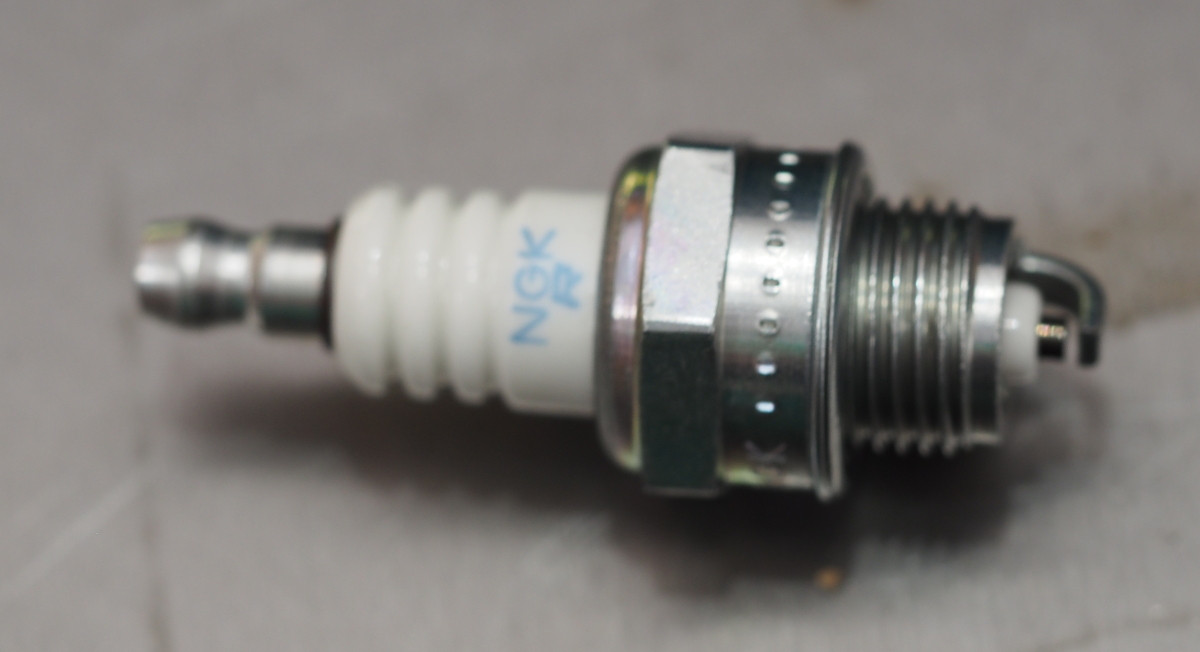 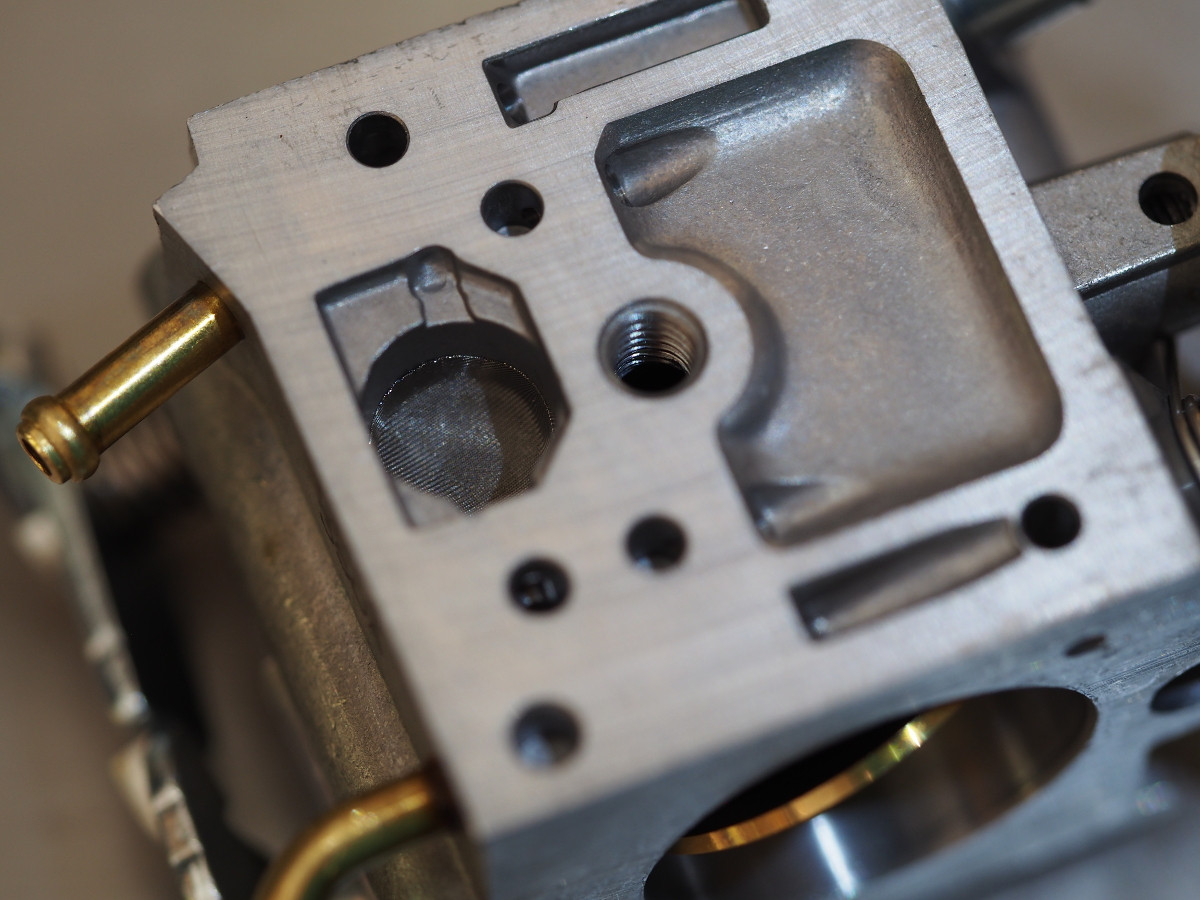 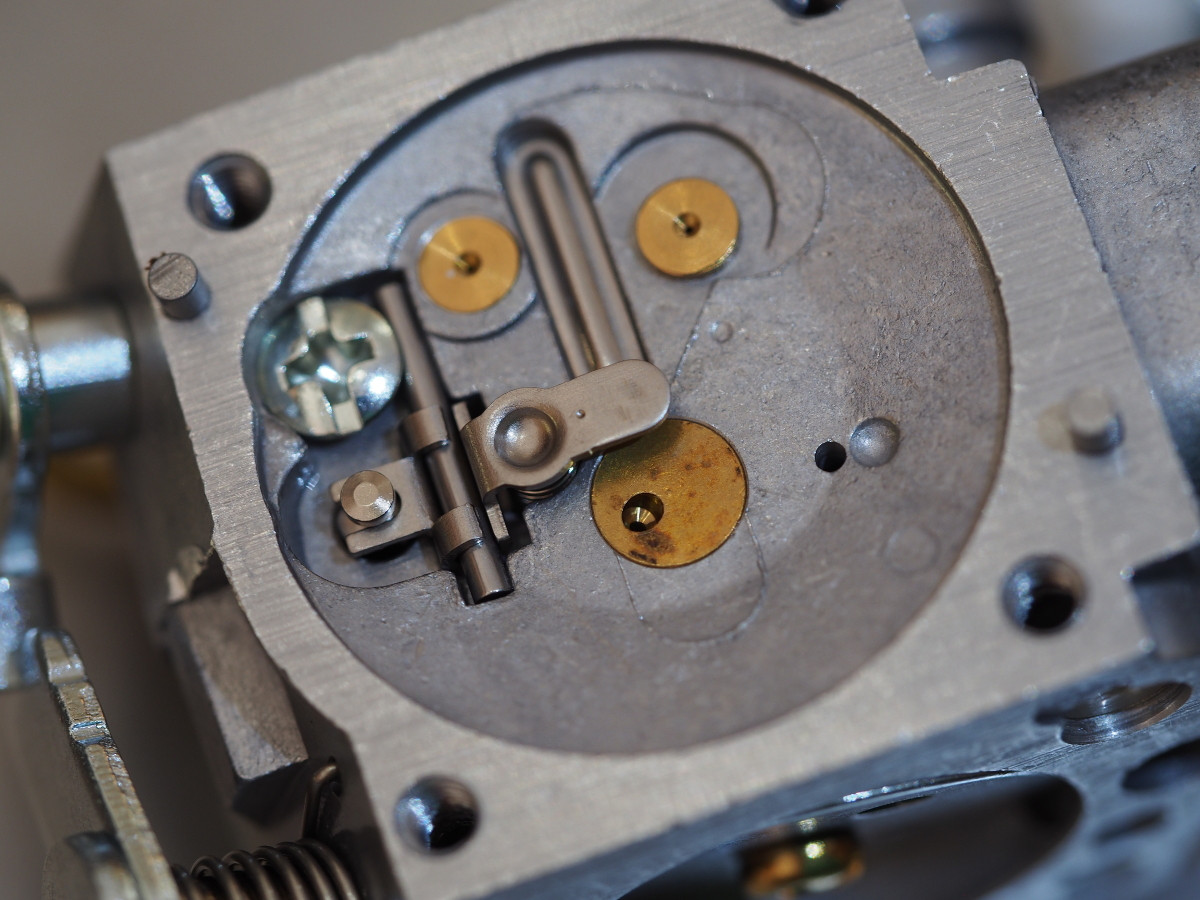 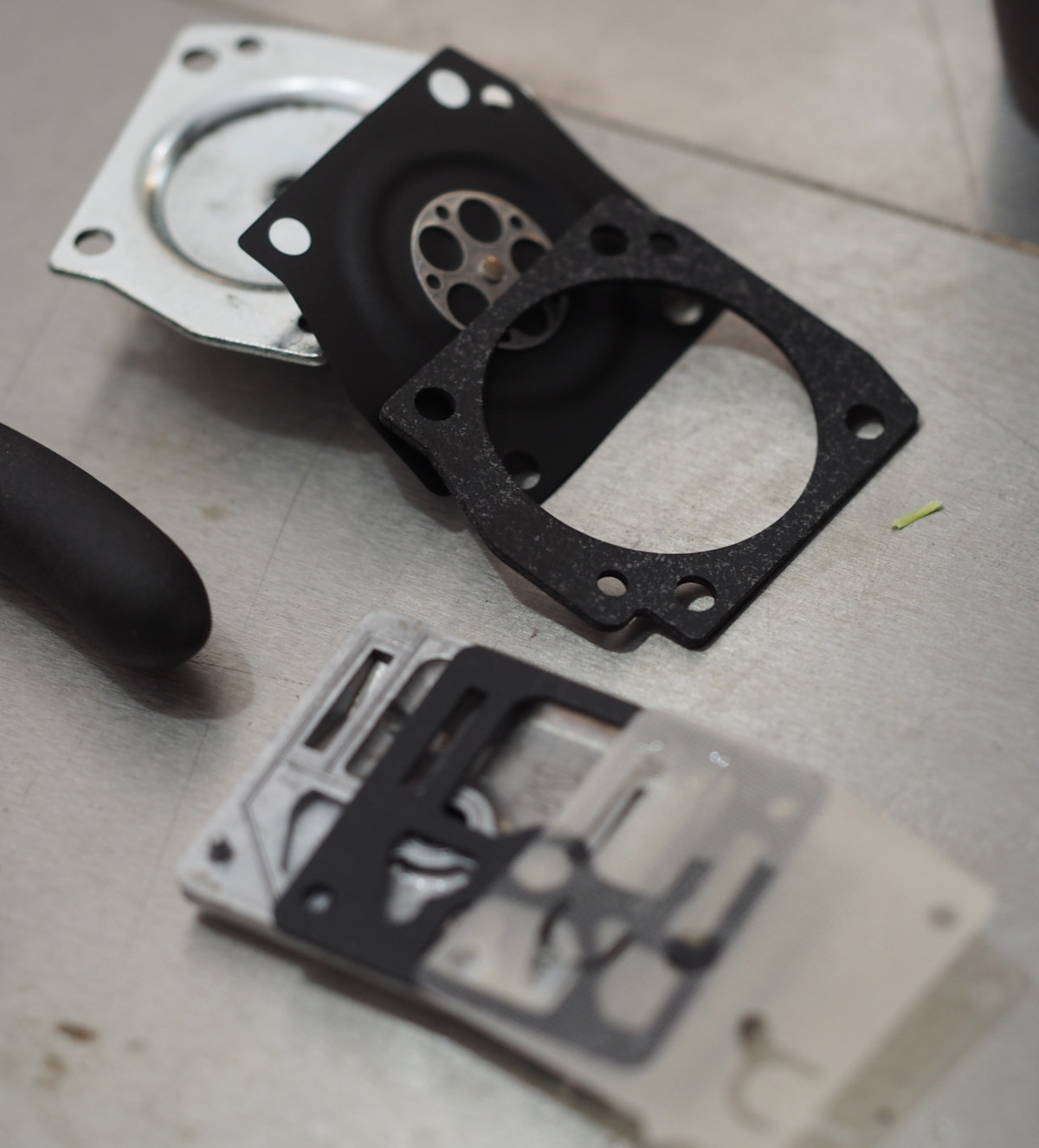 The plug does spark, although the spark appears a bit weak. I will quantify this soon.

The muffler / exhaust mesh is clean.

So I'm starting to run out of ideas. When I cleaned the carburator I sprayed them with an aerosol carburator cleaner, then used compressed air. There's a few tiny holes in the carburator [see the three brass items on the bottomside picture] and it's difficult for me to see if they are clear or not. Perhaps I need to soak the carburator in cleaner for a longer period of time -- complete submersion? Other than that, and the fuel filter, I'm at a loss. Would I be having this problem if I put a bit too much oil in the fuel mixture? A 50:1 ratio is hard to get precise in these small quantities. Somehow I doubt that's the problem.

edit: When I try to start it, then quickly take out the sparkplug I find a fine mist in the ignition chamber. So it looks like the carburator is doing it's job. The sparks produced are quite faint and weak looking. If I increase the gap on the sparkplug it continues to throw a spark, but it remains very faint. Are the ignition coils servicable on these things?

It appears not. I've put in an order for a PET 4000EC spark tester so I should be able to test the spark thrown vs. a healthy (similar) chainsaw soon. Not quite certain how to test the coil.

Aha! The Bailey's website has the service manual for this saw. The direct link does not look very stable -- I found it by googling "Dolmar service manual".

Getting the chainsaw to this point isn't much work. 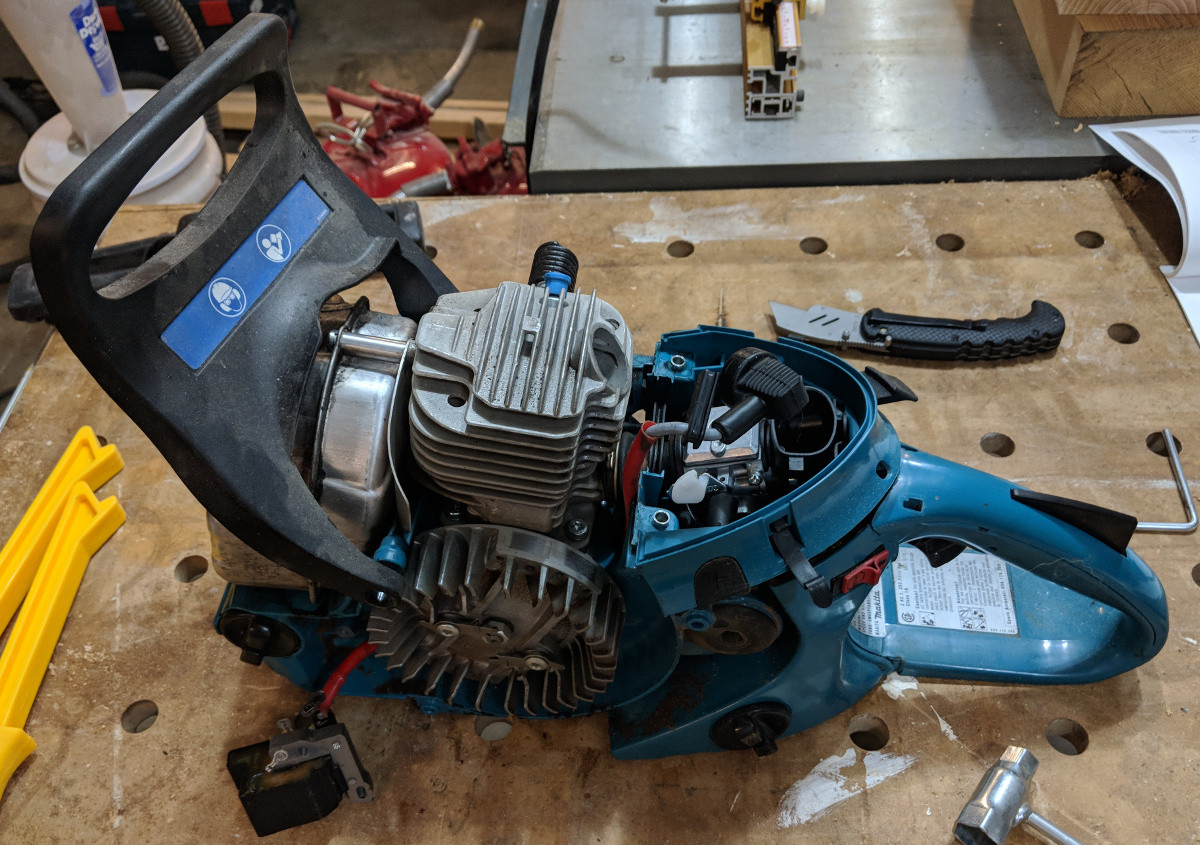 Removing the flywheel appears to be the most technical part here. Not certain if I won't mess this up -- the manual refers to special parts and precise spacing.

Wasn't certain how to get the flywheel off. What I did is suspend the chainsaw (by the flywheel) by making a little "net" of string for it to hang off. I loosened the bolt, then whacked the bolt with a hammer. From there I could undo the bolt and pull off the flywheel. 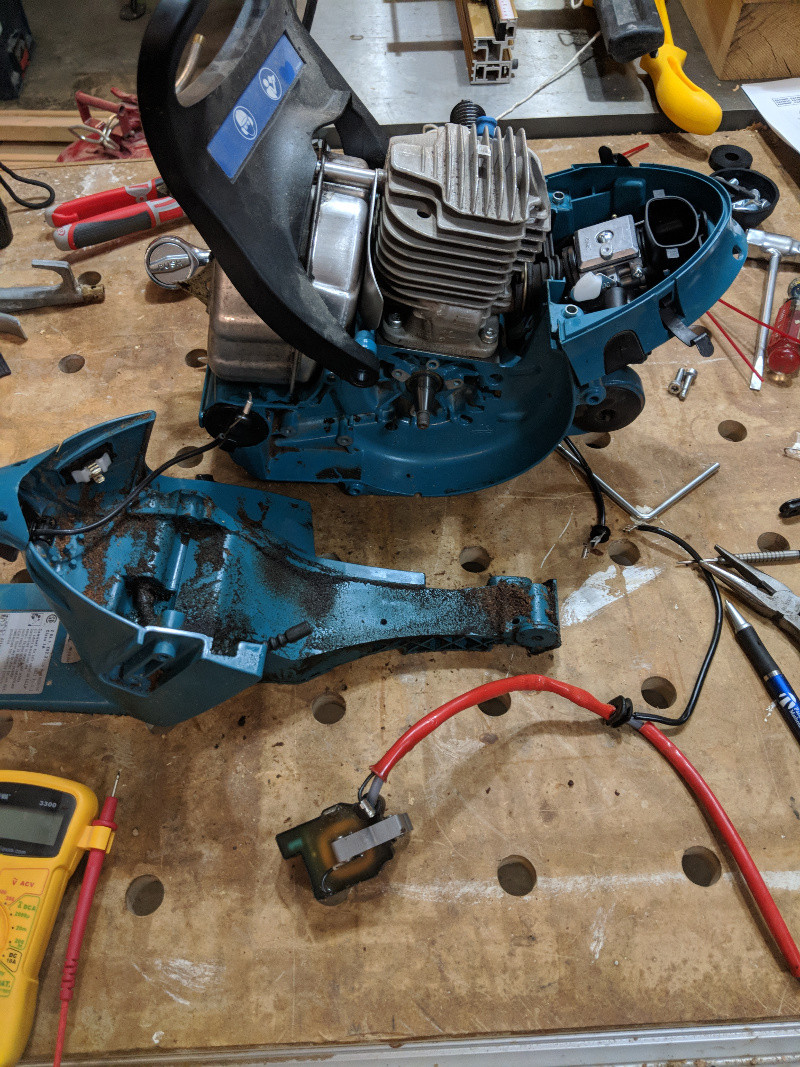 The coil came out fairly easily after that. 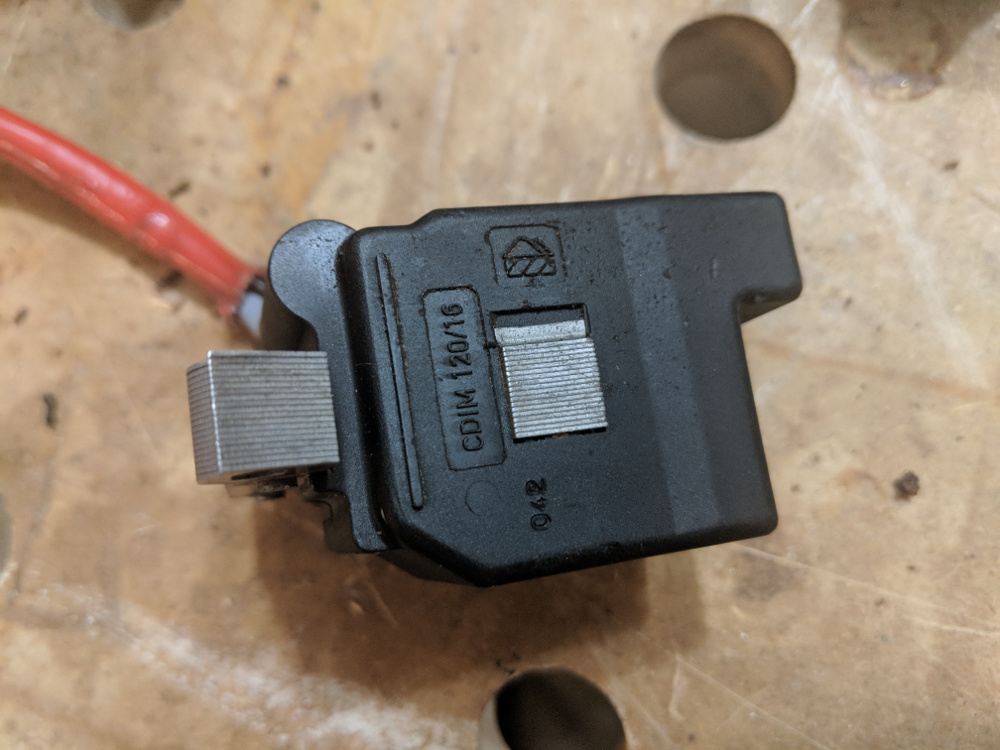 I have a replacement coil on order, so I should be able to compare this coil with the new one. I hope it's the coil that's the problem or I'll feel pretty silly for going to this length of work.

Yes, it turned out to be a faulty coil. The replacement coil came with its own flywheel, so perhaps there was a design flaw in the original. 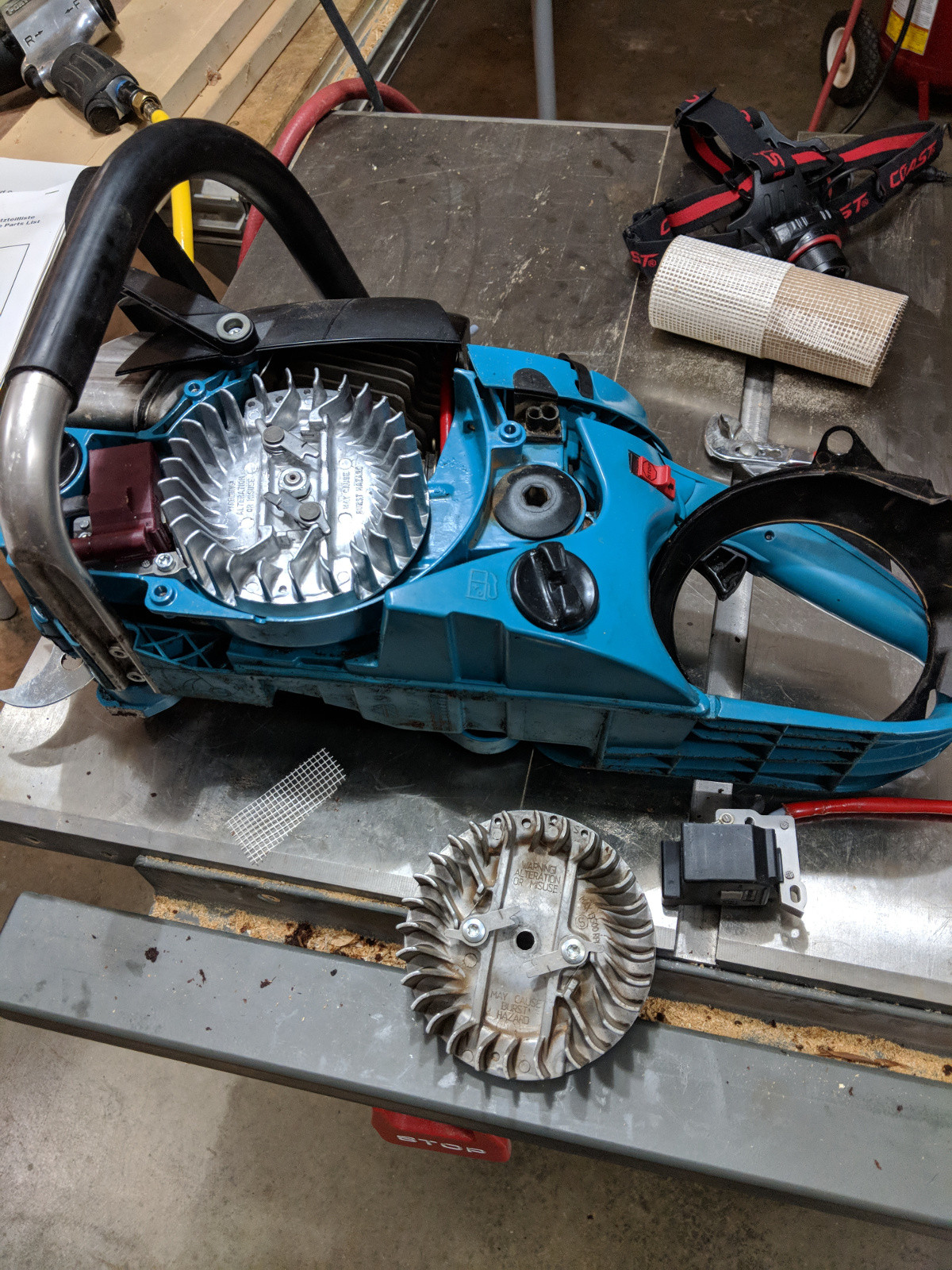 It took some work to insert the new coil. Setting the gap between the flywheel and coil (0.3mm) was a little fussy. Had some automotive feeler gauges lying around that helped with that. And getting the little spark plug cap/insulator properly on the coil was a bit of a pain.

After buttoning it up, it started on the first pull. So I'm fairly certain it was the coil.

Not the answer you're looking for? Browse other questions tagged chainsaw or ask your own question.

1
How do I put a hole in my chainsaw bar?
3
What could cause a chainsaw chain to stop moving?
1
What should I check if my chainsaw fails to start?
1
Is there a proper amount of chainsaw tension
0
Why is my chainsaw stalling?
1
What is the part called that chainsaw bar flange nuts screw into?