Does this main service panel require blocks opposite main breaker?

This Murray Model 18 is the main 100A service panel to a residence in the U.S. It uses Cutler-Hammer BR-style breakers.

I'm confused because the panel cover blocks the two bus slots on the top right, next to the main breaker, and the cover there doesn't even have knock-outs like the other slot covers. Is there a rule or reason why breakers should not be put in either of those slots? 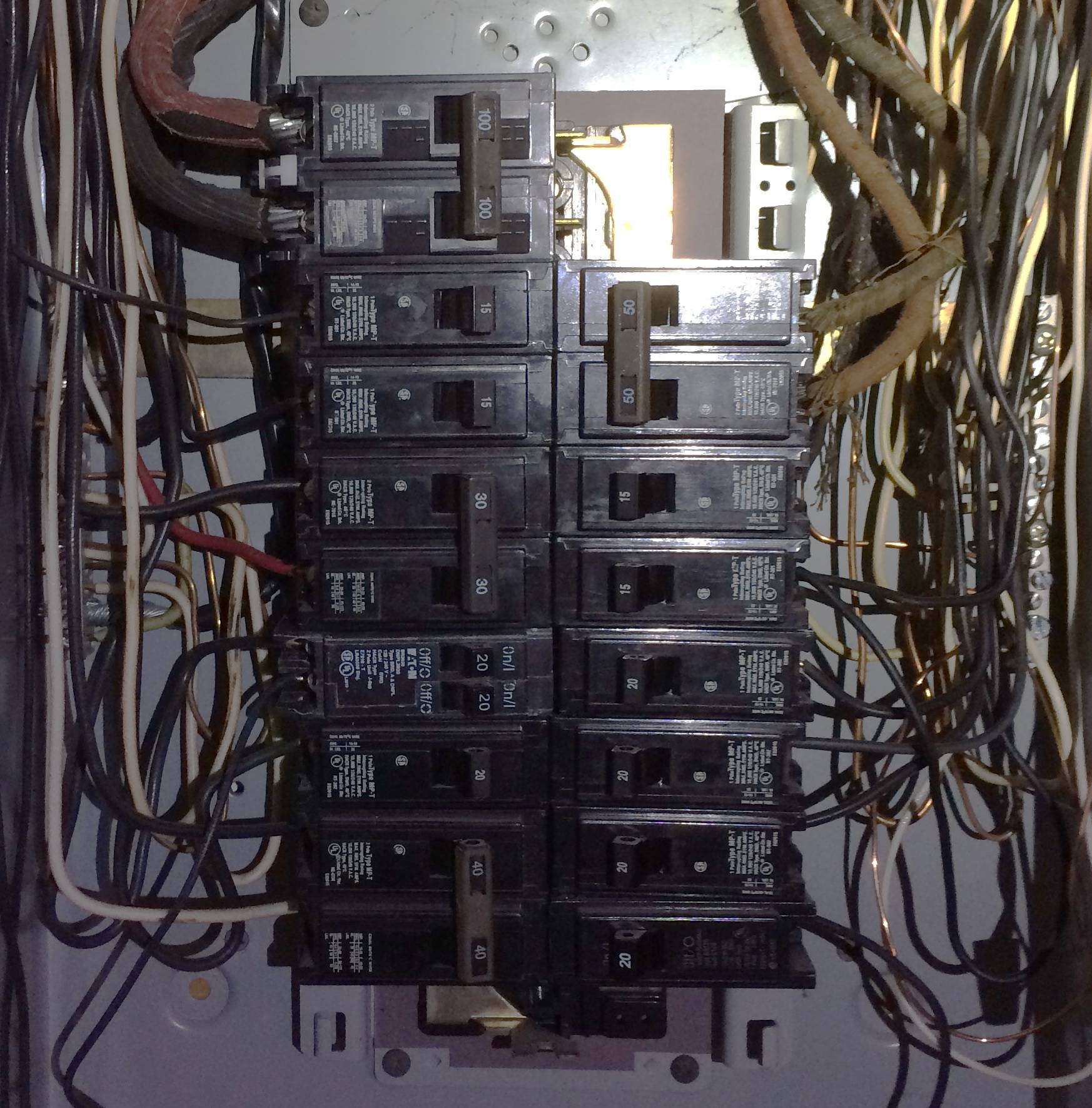 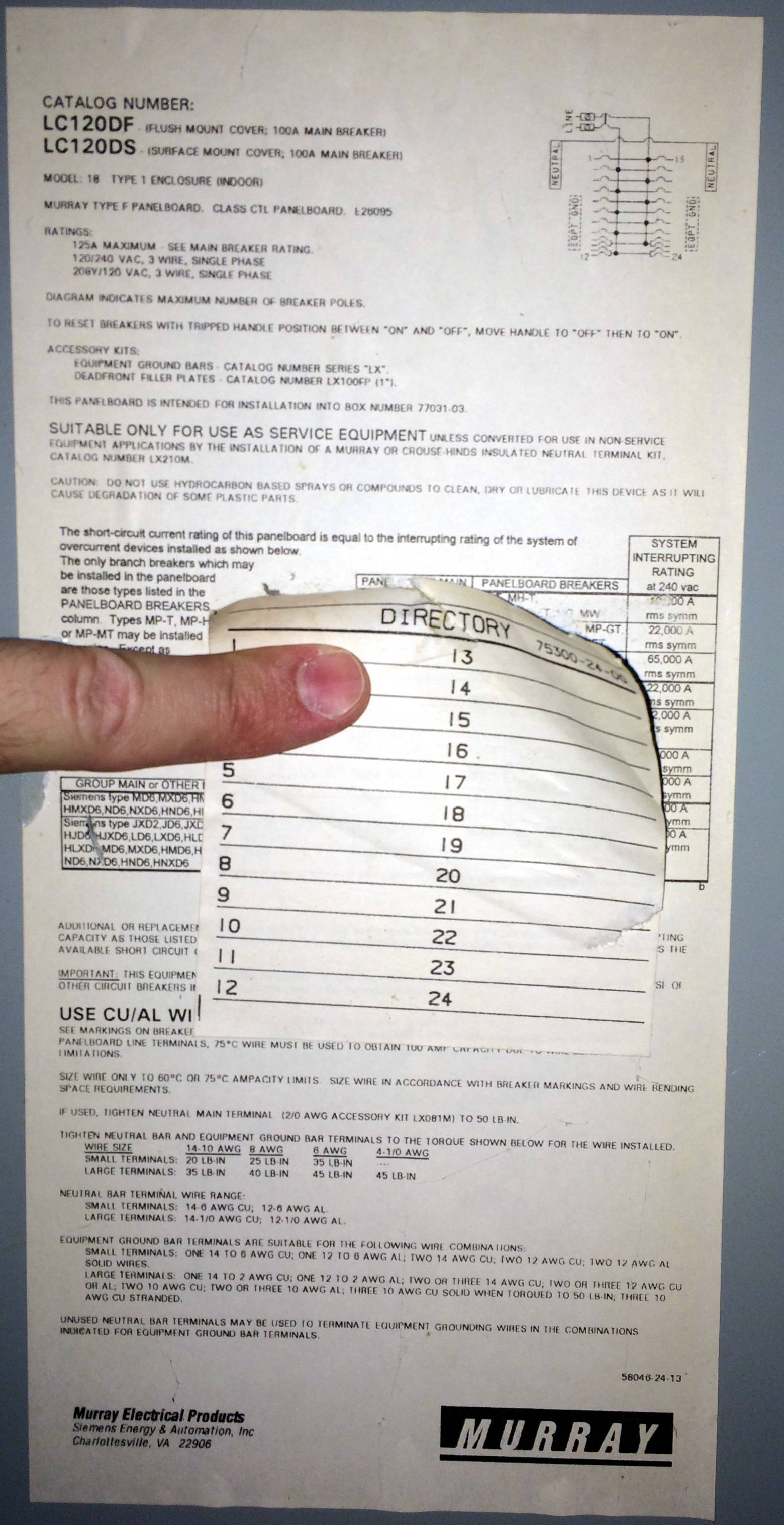 Since your panel isn't listed and labeled to have a breaker put there (the wiring diagram on the panel label would show a set of usable spaces there if they were intended to be used), it can't have a breaker put there (not without violating NEC 110.3, that is). You'll have to find a different way to fix the space problem (perhaps with the aid of double-stuff breakers?)

While you're in there...

You also have a fairly minor alien problem -- the panel's a Murray LC120 and is only listed and labeled for Murray MP breakers as a result. (Newer Siemens/Murray panels are cross-listed for MP and QP, but yours is too old for that.) So, you'll need to replace that BR tandem with a MP2020 and move it to one of the bottom four slots of the panel (as it's currently in a place that violates the panelboard labeling due to CTL issues), while replacing the other BR with a MP120 or an Eaton CL120 (which is UL classified for use in a Murray panel).

This appears to be a GE Panel with convertible mains. This means you can use it as an MCB of various amperages or a Main Lug Only panel if you purchase a Main Lug Kit. They are quite common among some contractors since you only need to buy a conversion kit and stock only one panel type (much less expensive on inventory).

Alright that's enough history. The conversion kits take up 4 spaces in the panel that's why the right side cover does not have removable blanks. The reason is this is where the stab in lugs have the most power running through them and the manufacturer wants to protect this area from overheating and arcing eventually destroying the connection.

So in answer to your question no you cannot use this area to add an extra breaker in this space as it goes against the manufacturers installation instructions and might create a fire or shock hazard. It would also void the panel warranty and liability.

The reasoning behind the restriction is to limit the amount of current on each bus stab. Since the main is down with the regular bus bars, the stabs that the main breaker land on are carrying the entire load of the panel.

For example, my Square D panel lists 175 A maximum per bus stab, which makes it OK for me to have a 100A breaker directly opposite a 40A breaker. However, if I wanted to change that 40A out for an 80A, that would be illegal.

I don't see any verbiage on the label in your post that indicates maximum bus stab current, but by blocking the slots opposite the main, that's what the manufacturer is effectively doing.

5
Any reason not to leave unused breaker in the panel?
1
Am I likely to be able to run a circuit from this panel for an EV charger?
0
Biggest size breaker in 200 amp panel
1
Main Breaker Panel or Main Lug Panel for Sub-panel in Attached-Detached Garage
2
Bonding vs grounding a main and sub panel
2
Replace Circuit Breaker on Split Bus Panel
4
Whole House Surge Protection at Main Panel
9
Covering a former service panel turned junction box
3
Can this CH breaker panel handle tandem breakers