I completely redid my shower with quartzite slabs. The ground was done in glass chiclets and bright white sanded grout. About two weeks later we noticed this stain bleeding in from the bottom edge of the slab as you can see in this image. 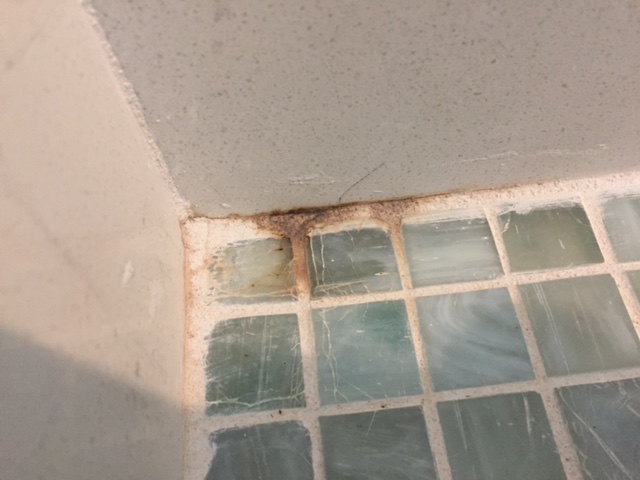 Any idea what this could be?

I'm worried it might be from a leak in the wall. However, there doesn't seem to be an obvious source. The valve and shower head are installed in the center and framed by the studs whereas this is in the corner. The drain goes straight down as this bathroom is on the second floor. Anyway, this is above the drain. The final far fetched idea is when it rained few weeks ago water leaked down and is bleeding through. However, it would have to have leaked between the hotmop and the slab.

To explain, the old shower was torn apart. The contractors built the new shell with concrete. Then it was hot mopped (tar). Then thinset applied and the slabs of quartzite put up. During this time, the pipes were exposed and not leaking even though water was on. Anyway, if it was the pipes I'd think I'd see water stains on the drywall below.

The one oddity was the old shower pan concrete was damp when it was removed. Because the pipes were not leaking I thought it was due to cracked tiles from the old shower. Kicking myself for not investigating further.

Browse other questions tagged shower grout stain or ask your own question.

7
Is my shower drain leaking under the slab?
1
Puzzling leak in my 2nd floor tile shower
2
Should I be concerned about water spilling behind tile wall?
1
Shower drain: plunger helps but only momentarily
1
Shower Plumbing or Concrete pan
1
Shower floor slope
0
Water under tile shower floor
1
Moen shower faucet - Leak
1
How can I get this elbow off my shower drain, or do I need to replace the entire assembly?
0
Shower stall leaking water in the corner