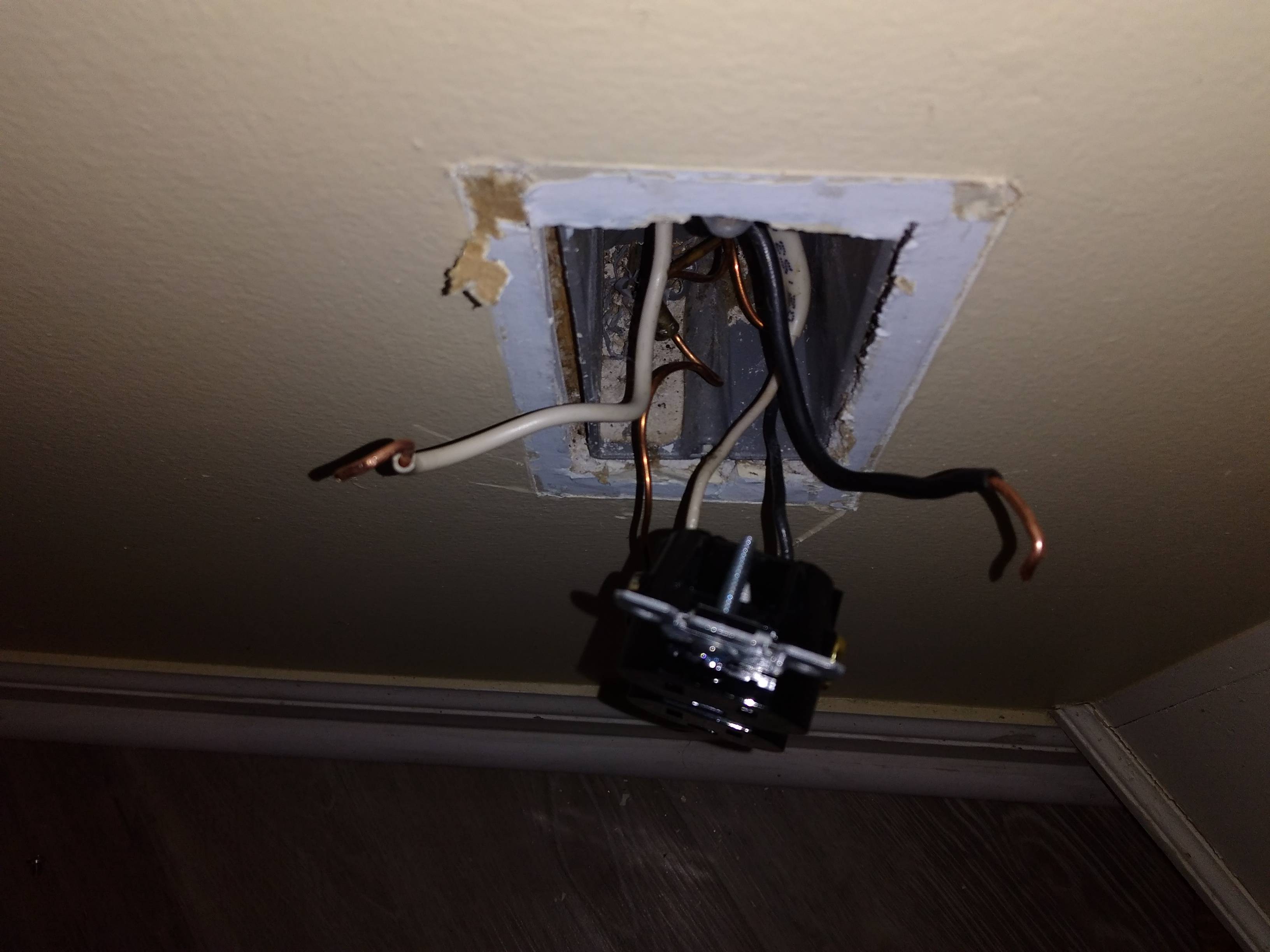 This is a normal 15A 125V wall outlet in my dining room. It consists of 2 black hot wires, 2 white neutral wires, and a bare copper ground wire. Here is the problem. If I wire all 4 wires to the 4 side screws on the receptacle, the circuit breaker for this section trips. If I just wire one hot and one neutral to either the top or bottom, there is no problem. The ground wire is always connected. What is the problem here and how can i fix it? Thanks.

There are three typical reasons to have two black/white/ground cables going into an ordinary duplex receptacle:

1 - Separate circuit for top and bottom to get more power - i.e., 15A on each outlet instead of 15A for the pair together. In this situation the receptacle would have the tabs broken off, cables supplying power coming from two different circuits, possibly sharing a neutral as a multi-wire branch circuit (MWBC) or possibly just two entirely separate circuits. Connecting both cables to a new outlet with the tabs in place would trip the breaker as described. However, the pictures you posted of the old receptacle clearly shows the tab (at least one side) intact.

2 - One outlet on a switch and one "always on". This is often done to have a light plugged in and controlled with a switch while still having some power always on for other devices. In this case typically, but not always, the power would all come from one circuit. The tabs would be broken off. The result, if you connected a new duplex outlet without breaking off the tabs would typically be that both outlets would be always on and the switch would be ineffective - but the breaker would not trip. There is also a possibility that a switch loop could be messed up here, causing part of the problem.

3 - One cable "in" and one cable "out". This is very common. You have a chain of receptacles, each with two cables, except for the last one. If that's the case, the preferred method (as I have learned recently) is to pigtail and only use one pair of screws on the receptacle, but using both one set of screws for each cable, with the tabs in place, would work just fine. But that would not explain the breaker tripping, and you would also have other receptacles or lights or something not working any more.

However, if this is the situation then:

After all of that, I am a bit baffled. A tester to check voltage would really be helpful here. There could be hot/neutral swapped somewhere along the line (dangerous, but would explain the problem) or something else.

Also, as Harper noted, the backstabs are a very bad thing. I don't think they are the problem here (except perhaps why the original outlet went bad) but they are frequently a source of problems. But with my understanding of the nature of the backstab problems, that wouldn't explain the problem you are having with the two cables tripping. In any case, do NOT use backstabs on any new receptacles, and if you disconnect any backstab wires, reconnect them only to the screw terminals.

Mana' is doing a great job with electrical answers, so I'll go another way.

Perhaps due to unclear markings, you are connecting supply hot and neutral to backstabs on the same side, creating a short from the outset.

Regardless, a rule of backstabs is that they are single use. If you are pulling the wires out or popping the release, the internal spring is now "sprung" and will not make contact reliably. You get four of these springs in a 50 cent socket, what can you expect? I could see internal damage happening too, which may also be the problem.

Backstabs are not made for homeowner troubleshooting, they have a single purpose: high speed assembly by builders. It's so a builder can wire 7 houses a week instead of 5. So there's no reason for a homeowner to pay the reliability penalty that is the reason most of us refuse to use them.

Try a new receptacle and the side screws or screw-to-clamp types, which have unlimited uses. Do not back out the screw too far, the screw are captive and "liberating" them will strip the hole or ruin the clamps.

I really mean leave the receptacle out of it, by using wire nuts to connect the blacks and whites in the box. If this trips the breaker, it means the downline circuit has a serious problem, or is not meant to be connected this way.

At that point, follow the directions in my comment colon connect the receptacle only to one of the incoming cables. You'll know which one is correct, the receptacle will work.

In this Arrangement, when you are ready to attach the receptacle, you put 6-inch wires on each of the screws, and join each one to its wire nut.

Not the answer you're looking for? Browse other questions tagged walls receptacle or ask your own question.