Can I wall mount this pedestal sink?

Is there a way to mount this sink on the wall? On the right side of the back of the sink, the outline of the 4th hole is molded onto the sink and I thought perhaps I can drill into that spot to reveal a hole that would allow me to hang it the sink on the wall.

The backing is plenty strong. 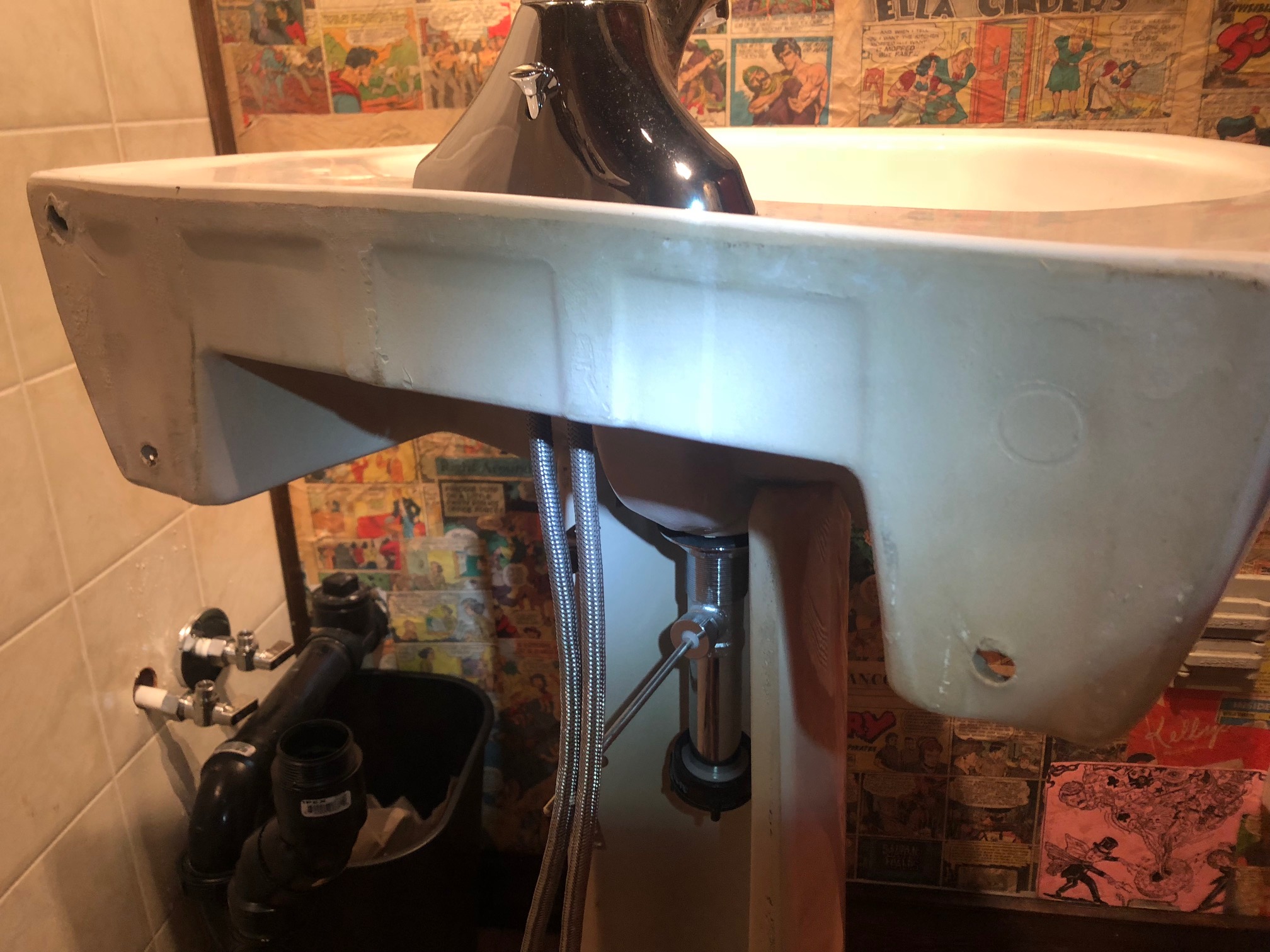 Hung sinks typically have brackets that connect high up on the sink. (This makes sense, because that's where you'd want to resist leverage.)

If you could somehow fashion a 2 piece bracket, it's likely** (see below) that you could drill into the porcelain (without breaking it), and attach it using sturdy toggles.

Unfortunately, it looks like you have a wall that's already tiled, so you don't have any depth into which to set this bracket. So unless you want to bust up your wall, I'd suggest you stick with the pedestal. Or get a deliberately designed sink that'll have the recess for the bracket built into the sink.

Porcelain is an inconsistent product, so failure is always an option. But, a diamond hole saw, used according to instructions (speed, spraying with water while drilling) will usually drill a successful hole. Plus, in this setting, a major blowout would probably be limited to the invisible back surface, which would mean that the sink is back to being used as a pedestal, which doesn't seem like such a great loss to me.

I don't think I'd trust the integrity of the back panel even if you could hang it successfully. The weight of the sink alone is a concern in that use case, and the inevitable clumsy person hanging on it will certainly result in catastrophe. If you were able to get suitably large washers inside the upper holes, but....

The only way I'd mount this would be using steel brackets from underneath--not fastened to the back panel or otherwise. L-brackets bolted to the framing and extending under some part of the underside of the sink at least 2/3 the depth of the sink might do. You'd need to use silicone or some other adhesive to keep it in stable and in place, along with lag screws through the lower holes.

And adding 2 super thick "L" brackets from the wall to the flat underside of the sink.

Not the answer you're looking for? Browse other questions tagged bathroom sink or ask your own question.

6
How do I install this wall mount bathroom sink?
5
How can I brace a bathtub faucet without tearing out the tile wall?
3
how do i mount this old Toyo Toki (Toto) sink?
1
How should this vintage wall-mount sink be mounted? Does not fit standard cast iron brackets
2
Pedestal Sink Base Removal
2
Vintage help: How to install a 1902 pedestal sink
1
How do I wall mount this sink?
0
Raise sink up off pedestal
2
How to mount this sink?