How can I install a wired smoke detector without compromising the fire rated sheetrock?

We have a connected garage with a bedroom above. It has proper fire rated sheetrock and a fire rated door. We use it for storage (including some paint and other normal chemicals).

For this reason I'd like to install a hardwire smoke detector at the same time I install three others in adjacent rooms. But I'd rather not create an opening in the fire rated sheetrock.

What are my options, other than a battery powered wireless detector?

I am aware that normally garages get heat detectors, not smoke detectors... but remember we use it for storage.

I take it the detector is mounted in the ceiling, and a cut-in 3-O or 4-O (plastic) boxes have a 2 hour fire rating. If this is not enough then you can use metal ceiling octagon box (2 hour fire rating) and use something like a 3M Fire Barrier Moldable Putty Pads. Most companies that deal with fire related caulks and putty make these. A lot of states require these in fire walls and ceilings, especially in multi-family units. 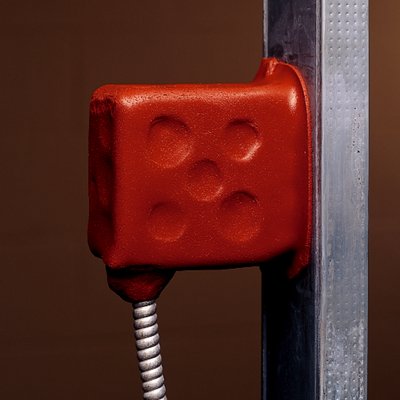 These pads are intumescent, which means that it swells as a result of heat exposure, thus increasing in volume, and decreasing in density. Wikipedia.

If I were you I would take it a step further and install a 120V with a battery back-up smoke/carbon monoxide combo units. You can also pay more for the detector and get either optical or ionization styles. Ionization detectors are more sensitive to flaming fires than optical detectors, while optical detectors are more sensitive to smouldering fires. Wikipedia again. Electrical supply stores should have all this or Amazon. I suggested 3M only because that is what I am used to.

Also, since the electrical boxes are fire rated, you might just use a fire caulk around the box. Caulks are intumescent also.

Surface mount the detector, and run the cable through conduit.

5
What type of electrical box do I use for a hard-wired smoke detector?

6
What's the signalling voltage on hardwire smoke detectors? Mix and match?
5
What type of electrical box do I use for a hard-wired smoke detector?
4
Is this smoke detector safely connected?
0
Sprinkler system & smoke detectors - Illinois code requirements when closing loft
0
Smoke detector wiring - black wire in 3 wire appears to be damaged. Can I use power from AFCI circuit to power but use red wire to interconnect?
1
Hardwired Smoke Detectors, go with sealed battery units or unlocked with lithium 10 year batteries
2
Signalling a smoke alarm from interconnected (hardwired) detectors to an alarm panel
39
How did a circuit that was shut off at the breaker almost kill me?